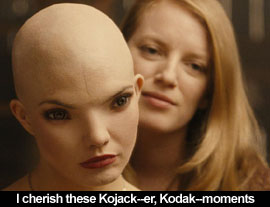 by Ian Pugh Vincenzo Natali's Splice unavoidably lives in the shadow of countless sci-fi/horror properties that came before it--stories that have already taught us, as Splice teaches us, that tragedies occur when Man dabbles in God's domain. But dismiss the film as cliché at your own peril. While it provides numerous shocks to the system, the traumas themselves take a backseat to the horror of their implications and, moreover, what those tragedies say about the risks and ambitions of daily life. Indeed, while the movie consciously seeks to fashion a cautionary tale out of the stock phrase "What's the worst that could happen?," its ultimate goal is to tell that tale as a domestic drama.

Vital to understanding Splice is accepting that all pretense of morality was pushed aside long before we met these characters. At the start of the film, scientists Clive (Adrien Brody) and Elsa (Sarah Polley)--Victor Frankenstein and Mary Shelley, in other words, re-imagined as dumbass undergrads--are minor celebrities for dabbling with animal DNA to create various abominations against nature. (Their latest endeavour has resulted in mobile blobs of flesh cheekily nicknamed "Ginger" and "Fred," a handy indication of how seriously these people take their work.) Ostensibly, they're attempting to isolate proteins for use in livestock, but being forced to validate their genetic tinkering only triggers some rebellious instinct. Going over their superiors' heads, Clive and Elsa start another project with human DNA, which results in a gangly, partly-human hybrid nicknamed "Dren" (Delphine Chanéac). Theoretically, Dren's lifespan is so short that raising her to adulthood would make for an interesting experiment.

Predictably, Dren grows beyond their control--but as her powers (and hungers) manifest themselves in increasingly dangerous ways, her presence proves to be more of an emotional threat than a physical one. Certainly this "experiment" is going to result in dead bodies and broken hearts, but more important to the conversation is how the observers and the observed alike are forced to evolve beyond their comfort levels. Unsure of how to deal with their new charge, Clive and Elsa take turns treating her with scientific detachment and parental love--sentiments, both, that are pushed to monstrous breaking points. The child almost kills her mother in the process of "birth," establishing a latent, long-term resentment; Dren's pleas for companionship are cruelly denied one moment and terrifyingly fulfilled the next. The metaphors fly at an alarming rate, and the major players are forced into new roles at the drop of a hat: scientists become parents, experiments become children, children become adults, daughters become mothers, and killers become lovers.

Splice seems to believe that it's impossible to forge any kind of moral compass when your identity is in constant flux. That, by itself, would make it a subtler counterpart to Natali's debut feature, Cube, but these ideas are further complicated by the familial relationships at play. Splice manages to tackle Oedipus and Electra while recounting the sad history of Elsa's abused childhood--a history that is, inevitably, passed down to the next "generation." (A thematic link to Raising Cain, perhaps? One could easily imagine Brian DePalma tackling this material twenty or thirty years ago.) But what prompts our heroes to act the way they do, under the circumstances? The time will come when our scientists rue the day they decided to reach beyond their grasp, if only because they know now what terrible people they have always been.

The influence of "human affectation," however, is a question of particular interest to Splice. Natali spends a lot of time indicting Clive and Elsa for their immaturity and lack of foresight, but that's the easy part--Dren's presence opens up countless wounds and reveals unsavoury motives. Whatever direct influence they have over Dren and her actions is, appropriately, left a mystery. (Again, Natali wisely calls back to his scientists' dismissive attitude towards their projects.) Who makes the rules? How, exactly, does "nature versus nurture" apply to a genetically-engineered animal-child? It's impossible to guess where the cycles of hurt and distrust began in this family dynamic and, furthermore, where they will end. The only concrete conclusion we can draw is that, in the struggle to survive and reproduce, we are all victims and we are all aggressors. Originally published: June 4, 2010.