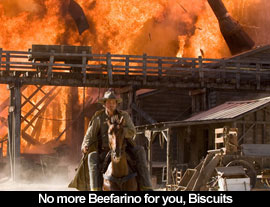 by Walter Chaw Distilling a fairly popular Weird West comic series down to a tight little 80-minute ball that plays like another adaptation of the Max Payne videogame, ex-Pixar animator Jimmy Hayward's Jonah Hex is a whole lotta boom-boom executed in a borrowed, curiously flat style that has one pining for the days when Sam Raimi was making stuff like Darkman and The Quick and the Dead--those two films, incidentally, the ones Jonah Hex most wants to be. The eponymous Jonah (Josh Brolin) is a disfigured Confederate hero gifted--through hatred, a near-death experience, and healing from mysterious Injuns--with the ability to withstand point-blank shotgun blasts, briefly reanimate the dearly departed, and suffer Megan Fox's typecast performance as a really popular whore. Her Lilah keeps weapons all over creation, natch, because she might be an oft-visited saloon girl but she ain't nobody's bitch. Well, except Jonah's, I guess. But Jonah is too busy trying to kill evil Col. Quentin Trumbull (John Malkovich) to make an honest woman out of her. Jonah Hex may not know much, but he knows he's no fucking magician.

Jonah Hex is also the sequel to Wild Wild West no one in God's green earth wanted, with Aidan Quinn as President Grant, hiring our bounty hunter anti-hero to track down the bad guy and prevent his gadget-aided destruction of this "unholy union of states." In the middle of all the nuclear explosions, note the amazing Michael Fassbender of Hunger and Inglourious Basterds as Trumbull's alpha henchman, walking away with the picture as an Irishman who's both a great boxer and an expert bomber. (A sequence in which he chases Hex whilst wielding a smoking bundle of dynamite is a keeper.) More forgettable is a quick visit to Lance Reddick (doing his best Woody Strode) as a token black guy/nineteenth-century Q who arms Jonah with his next round of boomstick technology. Of course Lilah becomes a hostage, of course Jonah gets to fight Trumbull mano-a-mano, and of course there're a lot of snarling one-liners that only occasionally betray a sense of humour. What's surprising is the number of times Jonah Hex looks away from its bloodshed. For a movie that doesn't flinch at blowing up a traincar full of women and adorable children, it sure develops a conscience fast about showing a bad guy getting his head squeezed off by a giant gear. I mean, honestly, who do they think they're going to offend?

In the end, the weird aftertaste left by Jonah Hex is more likely due to its desperate attempts at topicality than to its brevity or its sad, cowardly chastity. Take, for example, the way it refers to Trumbull as a domestic terrorist bent on dissolving the Union by any means possible, including employing a band of thugs who occasionally resort to strapping themselves with bombs. Or how an impotent centralized government finds itself incapable of locating a lone wackadoo despite the aid of advanced "intelligence" gathering methods. Or the off-tune condemnation of vengeance as a guiding principle even as it's clear that the only thing that motivates anyone in this film is some combination of greed, venality, and vigilante justice. It's a movie about the dangers of terrorism that glorifies it, locating itself midway between crazed right-wing secessionists and idiot left-wing equivocators--meaning that it lacks the courage not only to deliver a money shot, but also to offend anyone philosophically. Jonah Hex frustrates because it looks great, boasts a well-cast ensemble, and has an interesting source--and still it can't manage to be much more than a sanitized, dumb-as-dirt exploitation flick without sex, gore, or politics. It talks a lot, but it's not saying anything. At least it's short. Originally published: June 18, 2010.