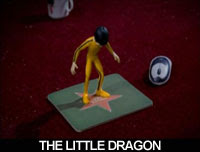 by Bill Chambers It's tempting to say that pop already ate itself, leaving a vast wasteland of remakes and reboots that can't possibly be fertile enough to cultivate imaginations; I sometimes lie awake worrying that one day all we'll be left with is the vultures and their Jane Austen mashups, their homemade Lord of the Rings prequels and Sweded Rambo movies. Should such a Doomsday scenario come to pass, let's hope it occasionally yields something as whimsical and obviously heartfelt as France's The Little Dragon (Le petit dragon) (animated; d. Bruno Collet; 8 mins.; ***/****), in which a magical force brings a Bruce Lee action figure to life, seemingly with the legend's identity, if not his soul, intact, as it is his impulse upon encountering a Chuck Norris cut-out to kick it down. (He also recognizes his name and image on other collectibles.) Decked out in his yellow Game of Death jumpsuit, he navigates a maze of cobweb-strewn movie memorabilia that appears to be some Harry Knowles type's bedroom; in a moment of quintessentially French cinephilia, Bruce, having been passed the torch (the Statue of Liberty torch from a Planet of the Apes model kit, that is), stumbles on a makeshift crypt lined with dolls of Rita Hayworth, Humphrey Bogart, Errol Flynn, Clark Gable, Louise Brooks, Robert Mitchum, and, erm, Robert Taylor. The stop-motion animation is charming--this scrappy little guy may actually be the ne plus ultra of Lee imitators, who are of course legion--and the tone is deceptively irreverent. This is fan art, executed with gusto--but does it have a function? Collet could be the next Nick Park--but is he hurting for inspiration?

I sincerely doubt that Norwegian writer-director Sara Eliasson thought she'd be labelled uninspired or derivative when she came up with the  concept of a post-apocalyptic world where children rule and language is both dying and a MacGuffin, yet the dystopia of Still Birds (live-action; 13 mins.; **/****) is too redolent of Bad Boy Bubby to ignore, while the ragamuffin with the angelic singing voice is such an indelible part of The Cook the Thief His Wife & Her Lover that seeing another one here feels like copyright infringement. (The constant mewling on the soundtrack, meanwhile, prompted somebody in the next room to ask if I was watching Eraserhead.) It's a shame, because Eliasson is capable of delivering the odd arresting image all her own, the best of them--that of a dying queen draped in a robe of stuffed animals--incidentally the only one in the film to exploit the cast's native innocence for something other than grotesque shock value. Speaking of shock value, Denmark's Clean Carousel (animated; d. Andreas Bødker; 2 mins.; ***/****) violates a very specific taboo with an impishness I can only describe as Von Trier-ian. Ditto a determinedly primitive aesthetic that's rather effective as a psychic projection of the main character, an obsessive caretaker of a merry-go-round whose solitariness and emotional seesawing between euphoria and horror are paralleled in the spartan, similarly binary-minded Flash animation.

From medium (stop-motion) to aesthetic (sickly) to concept (grim fairytale), Spain's The Twin Girls of Sunset Street (Les Bessons del Carrer de Ponent) (animated; ds. Marc Riba & Anna Solanas; 12 mins.; *½/****) is an uncanny Brothers Quay pastiche. (All that's missing is a soundtrack by Tool.) The eponymous villainesses are decrepit old sisters who steal children, strip them of gender by shaving their heads, and use their body parts in the preparation of various elixirs that are popular with what I presume is the local apothecary, who looks, for reasons unclear, like Chaplin's Tramp gone to seed. (I think they're supposed to be cannibals as well.) In the end, the film may be entirely too ersatz for its own good: I'm not a big Quay fan, and found it nailed the oppressive dourness of their work without transcending it; and yet, I can easily see devotees rejecting it for getting as close as it does to the Quays' style without being the real deal--like a forgery. An unlikely palate cleanser, Israel's To Kill a Bumblebee (live-action; ds. Sharon Maymon & Tal Granit; 7 mins.; **½/****) opens with the more alpha dog of two hunters thoughtlessly killing a bumblebee, then shows the pair quickly become equally desensitized to taking human lives after accidentally killing "something Asian" and gunning down the witness to that, and each subsequent, murder. The fact that we ourselves are disturbed by the first couple of deaths and laughing uproariously by the time the body count is approaching the teens doesn't necessarily prove anything, but it's food for thought about the hollowing toll of violence. Still, as cut and dry as it sounds, this was the first time watching this batch of shorts where I felt like I was missing out on a deeper cultural context for the film. I'd love to read an Israeli take on it, if only to have its peculiarly specific hostility towards Thais illuminated for me.

At 37 seconds in length, The Tail Gunner (animated; d. uncredited; */****) is barely worth mentioning: a Furby-type creature dreams he's a WWII flying ace; this isn't a short, it's a bumper. Then there's the interminable Beauty Plus Pity (live-action/animated; ds. Emily Vey Duke & Cooper Battersby; 14 mins.; *½/****), which isn't really a movie, either. Indeed, to its credit, it's not like anything I've ever seen on screen before--though it is a lot like many an ultra-didactic, would-be avant-garde ("would be," if not for all the didacticism) high-school play I've sat through. Made by New York-based Canadian artists, the piece is half PowerPoint presentation done up in the style of airline-safety pamphlets, half found-feeling footage of a hunting party. Over the video-based material, a lunatic narrator with a Lee Perry-esque voice recites Philip Larkin's "This Be The Verse" and advocates the killing of animals as a way of communing with nature (this section is described in official literature as "part apologia and part call to arms"); in cartoon form, an anthropomorphized beaver holds a slideshow--hello, unauthorized still from Sixteen Candles--to aid a very human tale of woe involving the Catholic church's expulsion of a grieving mother for not preventing her daughter's alcohol-related death; and I compulsively check the timecode, however fascinated I am by the irreconcilable politics and inscrutable sincerity of the thing. In any event, I would maybe change that titular plus to a minus.

But it's arguably more palatable than The Prince of Milk (live-action; d. Eisuke Naitou; 15 mins.; */****), a student film reminiscent of amateurish Japanese gross-outs like Living Hell, if not half as endearing. The elliptical plot finds a possibly-retarded teenage boy killing himself after some giggly schoolgirls catch him jerking off and nickname him "The Prince of Milk" based on his long, ropey ejaculations. Shades of The Grudge, this manifests a vengeful, possibly-mentally-impaired spirit who goes around dry-humping the female student body and stabbing them repeatedly, all the while regurgitating milk onto their faces and into their mouths. Ten years later, the "Milk Prince" appears to be in a psych ward, where a schoolgirl rams an umbrella deep up his ass then opens it to protect herself from the arterial spray. Sorry for having given away the ending just now, but how often do you get to type something like that? I do like that it was shot in Academy ratio, or at least transferred that way to video, complete with frayed matte edges that bring super8 incongruously to mind.

They saved the best for last. Rounding out the "Freaky" portion of the WWSFF's Midnight Mania program, the UK's Yellow Belly End (animated; d. Philip Bacon; 9 mins.; ***½/****) is a deliciously absurd specimen, ripe for interpretation and stealthily emotional; no surprise that it's racked up an impressive number of awards. At the edge of the world, a man trainspots the animals he sees, keeping a running tally of which ones leap off the horizon to their presumed death by marking it in a book and taking a corresponding jellybean. I should clarify that there are no animals, per se, only people in Miyazakian costumes--like the man himself, who's dressed as a canary. When he inherits a suitcase with a bloody, beaten, and gagged "mouse" inside, he's confronted by a compulsive urge to give the mouse that last push he needs. Is it coldbloodedness? Pity? Completism? Or is it simply pretext for leaving his post and becoming more than a spectator in this society? (Given that the title links his costume to cowardice, it seems an act of bravery.) A late-developing romance in which the "bird" finds his complement in a cow avoids conventional geek uplift by distilling whatever bond they have to its temporariness. For all its accomplishment, including a perceptive sound design, I can't believe this is a student film. Originally published: June 4, 2010. 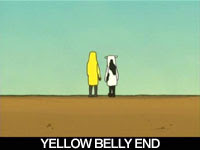