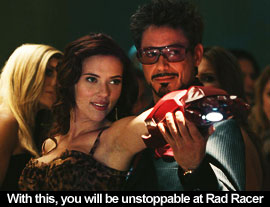 by Walter Chaw A multi-million-dollar machine carefully engineered to generate the ridiculous amount of money it's about to, Iron Man 2 is kept from total, instant obsolescence by its "too good for this shit" cast, which cleverly manages to distract from the fact that this flick is a tone-deaf, laborious mess. Front and centre is Mickey Rourke as wronged Russian physicist Ivan Vanko, an amalgam of two Iron Man villains and so enigmatic a presence that although the dumbass screenplay (by actor Justin Theroux) takes pains to make Vanko's angst father-based, it's hard not to be distracted by the more mysterious depths of Rourke's performance. Similarly good are Gwyneth Paltrow, whose Girl Friday Pepper Potts is given the keys to her boss's Stark Industries and burdened instantly by expectation and cable-news notoriety; Downey Jr. as Tony Stark, again playing himself as a tech billionaire; and Sam Rockwell as an unctuous, fake-baked rival defense contractor. Not so great are the bland set-pieces, the misguided attempt to parallel Vanko's avenge-daddy motivation with Tony's make-dead-daddy-proud motivation into one legacy-based leitmotif, and a series of convoluted plot mechanisms (Tony's dying! Tony loves Pepper! No, he loves dead-eyed, one-note-but-hot Natasha (Scarlett Johansson)! Tony's company is in trouble! Tony's in trouble with the government! Tony likes to get drunk!) that grind the whole enterprise to a standstill at short intervals. If you can maintain your interest during an extended sequence in which our Tony plays with a bunch of virtual computer screens while building a long tube, you either drank the Kool-Aid that makes you care whether Tony lives or dies, or you've slipped blissfully into a coma.

The only thing that's potentially compelling about Iron Man 2 has everything to do with its not-even-vaguely-surprising revelations that our media environment is polarized, that our government is driven by demagogues, and that the military/industrial complex is...well, a military/industrial complex. If you find the idea that war profiteering is a booming business shocking, then Iron Man 2 is indeed deep water. For the most cursorily informed, however, the movie's an essentially half-baked exercise in fetal political awareness, a moron's surprise at what drives men towards positions of power featuring undeveloped insights into father issues strung together by explosions and dots of light chasing each other around for long periods of time. Its sexuality is likewise immature, lots of leering and stolen kisses in uncomfortable orbit around one another--commentary not on Stark's adolescent libido but on the source material's and, eventually, the filmmakers'. The most dangerous legacy of the Iron Man franchise is that it's already become the pre-reboot James Bond franchise: a Republican fantasy of big guns, cool gadgets, fast cars, ultimately non-threatening women to condescend to and objectify (compare Natasha's little rampage to Hit Girl's in the infinitely-superior Kick-Ass), and the corpses of Cold War bogeys propped up like ideological scarecrows. Biggest surprise? That Vanko doesn't promise Iron Man he'll break him, Drago-style.

But the film's biggest crime isn't that it doesn't have anything to say, it's that it's just not much fun. Iron Man makes his first appearance before a throng of cheerleaders amidst fireworks, paving the way for this extended hand-wringing about our culture of Steve Jobs and Bill Gates--latter-day industrialists and robber barons being threatened with government "socialization" for the greater good. As attempts at contemporary relevance go, it's on a par with the first film's faceless Afghani victims and martyrs--and roughly as facile and perfunctory. The unaddressed irony is that Stark is a big business in desperate need of regulation, as evidenced by every single thing that happens during the rest of a film so assiduously afraid of consequences it won't show a single civilian fatality in the destruction of an entire city block. Iron Man 2 is a scary example of anti-intellectualism and blinkered hawkism in practice, a hodgepodge of self-defeating contradictions that determines at the end in its wave of inevitable audience approval that all that matters is boom-boom and scantily-clad tatas. Thus while the stage is set for all sorts of discussions (Vanko's crowning achievement after his electric whips is an army of drone soldiers, for example), what Iron Man 2 invests in is a dreadful, embarrassing scene where best buddy War Machine (Don Cheadle) inexplicably battles Iron Man to a Queen anthem, compared to which the camp classic Highlander seems refined.

Even more embarrassing, maybe, is Tony's flat, musty, interminable Pulp Fiction breakfast with Nick Fury, Motherfucker (Samuel L. Jackson) at a donut shop. Or maybe the moment where a Shepard Fairey-knockoff Iron Man poster apes Obama's iconic endorsement. Or maybe it's the scene where Stark's dead Disney-esque daddy (John Slattery) speaks to Tony from beyond the grave. Easier would be to note that the best parts of Iron Man 2 usually involve Mickey Rourke...and that Rourke is in the film for the same ten minutes it'll take for this picture to quintuple the cumulative gross of his wonderful The Wrestler.

It's the quintessential Summer Blockbuster™ is what I'm saying. At least it's not in 3-D. Originally published: May 7, 2010.