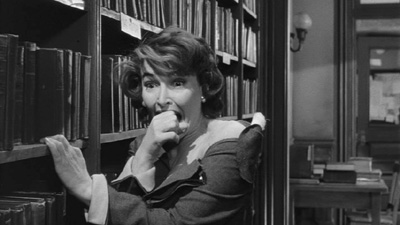 by Alex Jackson There are a few scenes in Richard Brooks's Blackboard Jungle that hold up, legitimately, as a thoughtful and fruitfully provocative investigation of the "inspirational teacher" genre. And when the film isn't working, it's often valuable as a time capsule of the 1950s and can be appreciated in a detached, archaeological way. But there are also times when you just can't help but condescend to it, and I'd hate for Blackboard Jungle to become a camp object. Blackboard Jungle may not be worthy of praise simply for dealing with issues of race and class, but the fact remains that some fifty years later, its subject matter continues to touch a raw nerve. By treating it ironically and laughing at it, we're absolved of the responsibility to fully engage with the issues it raises.

Yet how else are we to interpret the scene where the dedicated white teacher, Richard Dadier (Glenn Ford), takes his pregnant young wife, Anne (Anne Francis), out to dinner to celebrate his new job? He treats her to nothing more exotic than champagne and ravioli (?!) and she is seriously impressed by this. I suppose this was long before Chef Boyardee came to dominate the ravioli business, but from our modern perspective, it inadvertently brands Anne as poor white trash. This is problematic not only because such callous thoughts seem antithetical to the film's socially-conscientious mission statement, but also because it undermines the tension between Dadier's social status and that of his students. He's too much like them. And of course she's consuming alcohol while expecting. Fetal Alcohol Syndrome was not properly diagnosed until 1973 and accordingly Anne doesn't see the champagne as being that much worse than the ravioli for her baby. Her drinking adds a dark undertone to the character that compromises the film's melodramatic elements. As a result, we're unable to feel appropriately horrified when one of Dadier's students harasses her. The picture has already firmly established her as careless and kind of dim. She's lost our sympathy.

Meanwhile, I found Vic Morrow's highly-acclaimed turn as the Irish hood Artie West curiously underwhelming. Morrow comes off as more apathetic than disenchanted and more cranky than truly angry. Then-NEW YORK TIMES critic Bosley Crowther described him as a "sinister replica of a Brando-roughneck," and while he didn't mean that as a criticism, he's pinpointed the problem with the performance. Morrow isn't Method acting, he's giving the impression of Method acting. He doesn't really feel it. He hasn't figured out where West's anger is coming from and so he can't authenticate it. Instead, he's studied the external aspects of Brando's acting and learned to emulate them as a classically-trained thespian. (Though this was his first film role, Morrow had worked in theatre for years.) If it's hard to figure out exactly why Morrow isn't that good in Blackboard Jungle and why so many were nonetheless convinced of his brilliance, it could be that he fails in an extremely unusual way. He strives for realism here not because realism is synonymous with truth--but because realism was fashionable in 1955.

In fairness, the Motion Picture Production Code hamstrings the film and, by extension, Morrow. He's supposed to be threatening because West asks his teacher, "How'd you like to go to Hell?" The performance would definitely be improved by permitting Morrow to say "fuck" now and then. The conspicuous lack of obscenity in the dialogue renders Morrow's "Method" portrayal even more affected and stylized. Artie West shouldn't know how NOT to swear. Still, that's only part of the problem.

In the most fascinating section of David Fincher's 2008 The Curious Case of Benjamin Button, backwards-aging Benjamin (Brad Pitt) arrives at his twilight years just as his body transitions into late adolescence. Pitt has perhaps never been more James Dean-like than he is there, and in making this connection we can localize Dean's mystique in his being an old man in a young man's body. As the film progresses, Button becomes senile and physically regresses further into childhood. He's brought back to the nursing home where he grew up and yells at the staff when they tell him he has already gotten his breakfast. He calls them "fucking liars" and, particularly because The Curious Case of Benjamin Button is rated PG-13, the word has some sting to it. Benjamin doesn't resemble a mystical James Dean figure anymore. He looks more like a survivor of child abuse and neglect. This notion of having an old mind in a young body moves from hauntingly poetic to rather unbearably tragic.

All this suggests that casting the 26-year-old Morrow (who looks like he was pushing forty at the time) might've been more of an asset than a liability. Alas, Brooks mines the Artie West character for the romance and inoculates against the tragedy. Looking to finish things off with a bang, he ends the film with a climactic knife-fight between Dadier and West. This reduces the two characters to the personification of Good and Evil and trivializes any previous attempts towards social relevance. It's Hollywood bullshit at its most grievous. West may be hated as a symbol of everything that's wrong with 1950s youth, and he may even be celebrated as an anti-heroic symbol of the same, but on a base conceptual level, Brooks cannot see him as a figure of pity. There is no vulnerability to West, no hint that he was ever a kid, much less a damaged one. As a result, Morrow's age is yet another distracting superficiality as opposed to something capable of extracting the heart and soul of the character.

Surprisingly, Blackboard Jungle is incredibly effective in exposing the limitations of Dadier's liberal perspective. His problem isn't that he believes in his students, it's that he underestimates them. In the film's best scene, Dadier brings in a dictation machine and the class insists that Morales (Rafael Campos), a Mexican immigrant who doesn't speak English very fluently, be the first to try it out. Dadier mistakes their laughter during his oral report as jeering and is visibly embarrassed on the boy's behalf. West goadingly offers that maybe Dadier doesn't like "spics." Morales calls him an "Irish mick" in retaliation, causing another Irish student to throw a magazine at the Mexican. An enraged Dadier then lectures them on how ethnic slurs have a tendency to escalate into violence. He's failing to acknowledge the complexity of his students' multi-cultural environment. They identify closely with their ethnic heritage but recognize that, as none of them fit the "Ozzie & Harriet" mold, they're each essentially in the same boat. The name-calling is an act of aggression and an assertion of racial superiority, sure, but it carries with it an implicit undertone of self-deprecation. In calling Morales a spic, West is voluntarily identifying himself as a "mick." His use of the slur is largely an empathetic gesture. He's saying that if Dadier is embarrassed for Morales, he's embarrassed for them all. In the students' (and the film's) view, ethnic and racial divisions are of minor importance compared to the divisions of social class.

The name Dadier (and his ensuing nickname, "Daddy-O") has a clear Freudian subtext. Dadier served in the war and the unruliness of his students is partially explained by the fact that they never had a stable home environment, what with their fathers fighting overseas and their mothers in the workforce. Theoretically at least, West is transferring anger at his absentee father onto Dadier. Because Morrow and Brooks haven't supplied West with much psychological depth, however, Dadier is made into a literal, incontrovertible father figure. This isn't a man whose good intentions are misconstrued by a confused teenager--he's The Establishment personified. Dadier's failure to connect with his students is therefore not a personal failure but a failure of the system. If he can't teach, it may be that he has nothing to say which they need to hear.

The idea that the kids owe their hooliganism to parental absence is frankly outdated as sociology--it evaluates the students according to criteria they have had no part in creating. Dadier teaches English, a subject that seems especially vulnerable to Foucaultian subjectivism. Who's to say what is proper English and which literary works deserve canonization? People like Dadier, apparently. This isn't to say his curriculum is necessarily improved by student feedback. When his grammar lessons are met with resentment by the class, Dadier resorts to having them talk into a dictation machine instead of writing and watch and discuss cartoons instead of reading books. He breaks through to them, but at what cost? Is he accommodating his students, or is he compromising their education by dumbing it down? If he ever does work them up to the written word, the film ends before he gets around to it.

THE DVD
Warner's 1.78:1, 16x9-enhanced DVD presentation of Blackboard Jungle leaves room for improvement. Available as a stand-alone release or as part of Warner's essential, 7-disc "Controversial Classics" box set, this 2005 issue is a notch below the same set's transfers of Advise & Consent and The Americanization of Emily. Despite relatively high grain levels and crisp, perhaps boosted, contrast, there's a nagging softness or smoothness to the image, and the source print is less than pristine. Note also that the film's projected aspect ratio, per MGM's "flat" standard at the time, was 1.85:1; negligibly wider, maybe, but it's annoying in the long run that Warner continually defaults non-Academy/non-'scope titles to the dimensions of HDTV. The unimpressive Dolby Digital 2.0 mono soundtrack nonetheless shows few signs of age and serves its purpose well. The audio commentary, by Glenn Ford's son Peter, actor Paul Mazursky (Stoker), actor Jamie Farr (Santini, and billed as Jameel Farah), and assistant director Joel Freeman, actually made me pine for the dulcet tones of Dr. Drew Casper. It's not so much that the track is uninformative or rambling, it's that all this reminiscing and bonhomie significantly dulls whatever edge Blackboard Jungle had retained. I'm beginning to think it should be a general rule that cast and crew not directly comment on their work decades after-the-fact--delegate that responsibility to academics and historians. This is possibly the least critical yakker I've listened to since that of The Odd Couple.

A strange but not particularly worthy extra is the 1957 Hanna-Barbera "Droopy" spoof Blackboard Jumble (7 mins.), a CinemaScope cartoon presented in dupey non-anamorphic widescreen at an aspect ratio of 2.35:1. A mentally-impaired hillbilly wolf (Daws Butler, sounding a lot like Matthew McConaughey) believes he can break through to an elementary classroom full of hyperactive, juvenile "Droopies" and finds himself badly overmatched. This Michael Lah-directed short severely underestimates the film it parodies. We have no indication that anybody who made Blackboard Jumble has even seen Blackboard Jungle, let alone developed a reaction towards it. The question of why the filmmakers used Droopy when they were just going to disregard his brand image pales next to the question of why they were still employing blackface gags in 1957. By Fifties standards, the cartoon is culturally behind the times. What that means in 2010, well...I don't know at this point. Blackboard Jungle's own theatrical trailer rounds out the platter. Originally published: May 18, 2010.