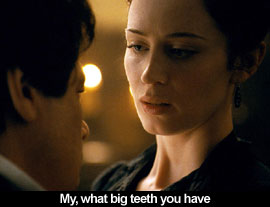 Instead, this thing is such a legendary mess that at some point it has to occur to the viewer that it's uniquely hysterical. Yet the mirth it inspires is born not of rancour, but of--for me, anyway--real affection. Take the moment when Lawrence, after getting tortured for a while in a Victorian asylum and hallucinating that it's old dad turning the crank, is brought up short by a choke-chain like a dog in someone's backyard. Or the moment when post-transformation, in an examination theatre, Lawrence looks up from a victim with a mouth full of liver and stomach. From the limbs literally flying from pits and out of gypsy wagons to the hilarious decision to have severed fingers squeeze off one last round from death-gripped pistols to decapitated melons snapping their jaws a few times in impotent fury, The Wolfman reveals its true colours as a work of grand, misplaced desperation. I love that Del Toro is so awful as our man Lawrence: one of our most gifted and enigmatic actors (who else could have captured Che Guevara in both aspects of his life?) is tasked, it appears, to do every single thing he's not able to do--namely, be an expat Brit who's made his name in the United States as a great Shakespearian actor and returned to Britain to uncover the details surrounding his brother's death. I love that Hopkins delivers one of his now-familiar terrible performances with so much stunning apathy that it comes across as perverse commentary on his own persona. (Exactly like the film comes off as a referendum on what it is that we really delight in when we watch seventy-year-old Universal frights--which, let's face it, with few exceptions, don't hold a candle to the depth and weight of Val Lewton's contemporaneous work.) His introductory scenes, played off a bullmastiff named Samson, are reason enough to see the picture.

Camp in the best, least astringent sense of the word, The Wolfman finds its stride in Hugo Weaving's weary Scotland Yard investigator Abberline, burned recently by his inability to catch a certain Ripper and dedicated in his long, drawn-out syllables to proving that Lawrence's inability to reap love from his father has led him to a few dark places. The great tragedy of the film is that Weaving doesn't have a significant scene with the clearly-nuts Hopkins--imagine the places these two would go given this screenplay and this environment. But what we do have is a midnight-classic-in-the-making--a movie with more quotable bad dialogue ("You...morons! I'll kill all of you!"), more deliciously incomprehensible scenes (such as the one in Gwen's antique store in which Lawrence tumbles out of a cabinet with a groan), and more chest-pounding familial melodrama than should be allowable by law. It works as homage in the sense that it's no less dated than if it were made in 1941 with no budget and slumming actors burning off contract obligations; and it works as update in that watching it inspires a great deal of introspection regarding the ways we forgive that which we don't respect. Frankly, anyone who says that George Waggner's original 1941 The Wolf Man was better either doesn't remember it well, has never seen it and holds to the idea that remakes are verboten on principle, or is a condescending prick who believes that quality is measured on a sliding scale. Truth is, this Wolfman is an unholy mess--godawful, never-scary/sort-of bloody stuff--that just happens to be fun, energetic, and actually a bit sticky on the back end. It's so, so bad that it's almost great. It's a hoot. Originally published: February 17, 2010.