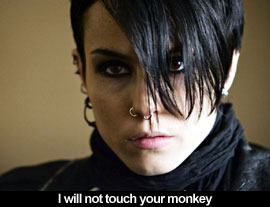 by Walter Chaw Slick and overproduced and poised for a David Fincher-helmed American redux, The Girl with the Dragon Tattoo (Män som hatar kvinnor), Niels Arden Oplev's adaptation of the first of the late Steig Larsson's "Millennium Trilogy," falls off the exploitation tightrope. The titular malchick may be insane in the mainframe, but when she gets naked and straddles, cowgirl-style, an old guy while resisting even the notion of a committed relationship, it is only what it is. It doesn't matter what her issues are, in other words, because she's a hot twentysomething Goth-chick fantasy into computers and casual sex--and when I'm watching a representation of same, I'm not growing a conscience, I'm getting a hard-on. Imagine Elisha Cuthbert playing this role in the United States: on the one hand, it's theoretically harrowing to see her tied up and raped; on the other hand, I'm not complaining about seeing a hot twentysomething actress tied to a bed, completely prone and naked, pretending to be raped. It's the kind of playacting porn is discouraged from engaging in because it's actually too illicit for porn--but it's not too illicit for an arthouse import that's allegedly trying to have a conversation about what happens to little girls who are sexually abused.

Here's the problem: the premise has to do with the complete inscrutability of our mysterious, damaged-goods heroine, meaning that no great insight is offered her behaviour; all I know is that I'm watching a hot, promiscuous young woman fucking around with an older man, totally starkers, and imagining what that might be like, no strings attached. That engagement with the fantasy mechanism of opportunistic insemination is what dooms The Girl with the Dragon Tattoo to a specific exploitation ghetto. It's a mainstream, high-budget invitation to look at tits and pretend-sex. If that's not enough, the film also introduces a Nazi serial killer plot complete with Biblical references and gruesome crime-scene photos (no wonder Fincher's interested in the material--it's Se7en except you get to bear witness to "lust"), meaning that it's all a little too much like an entry in the Ilsa, She-Wolf of the SS series.

Anyway, Lisbeth (Noomi Rapace) is auditioning for Death in a community-theatre Neil Gaiman production because of some BigBad in her bleach-bypassed past and working off her parole period at some information-gathering firm interested in her hacking prowess. Why she doesn't use said hacking prowess to make life miserable for her disgusting parole officer would be a mystery except that it's better for the Ms.45/I Spit on Your Grave! portion of the proceedings for her to shove a dildo up his ass before tattooing a few scarlet letters on his quivering torso. Ah, let daddy make that rape all better. But is this cathartic action absolution for Lisbeth or for the interest shown by the raincoats in the audience not entirely disappointed to see her bare ass up in the air? Lisbeth has been investigating the libel case brought against maverick journalist Mikael (Michael Nyqvist) when a billionaire industrialist retains Mikael to investigate the four-decades-old missing-persons case of his then-16-year-old niece, Harriet. Soon, their e-relationship transforms into the more standard bumping-of-nasties variety as the dynamic duo unravel a nefarious plot that seems to sort of have something to say on the subject of Sweden's hangover from WWII but more reminds that if you want a Scandinavian movie about evil Nazis, you're be better off renting Dead Snow.

Hidden beneath the slick Hollywood editing, camerawork, and scoring, find in The Girl with the Dragon Tattoo this completely controversy-free bit of sensationalistic flotsam designed to bridge the time between invitations to indulge in fetishistic fantasy. If this is feminism, I'm all for it. Lisbeth is a complete pose, Mikael a total straw man, and the whole of it washes out as some guy's sneaky update of a 1940s-era pot-boiler, complete with vile Nazi scum engaging in perverted sex crimes with Freedom hot on the Hun's tail. Making things worse is that the last thirty minutes of the film are given over to the careful, Agatha Christie-musty resolution of every single subplot with the talking-to-a-slow-child care of Shutter Island's pointer-and-blackboard conclusion. Bad enough as it is, one's left with the feeling after the end of this interminable picture (The Girl with the Dragon Tattoo runs a very long 150 minutes) that all that atrocity was assembled just for the shot of Lisbeth, freshly blond and un-pierced, throwing her head up to the healing sun and sauntering away down a road. The only thing missing is her tossing her hat up in the air to a freeze-frame moment of pocket-actualization. She's gonna make it after all! It doesn't earn its darkness, in other words, and in fact betrays it in favour of a bittersweet romantic resolution, an entirely superfluous trip to Australia, and a strong need for a Purell bath and a copy of this film to enjoy in the comfort of one's own unfinished basement. Originally published: April 2, 2010.