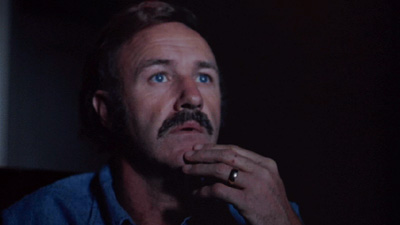 by Walter Chaw On the strength of his scripts for The Hired Hand, Ulzana's Raid, and Night Moves, Scottish novelist Alan Sharp seems well at home with the better-known, more highly-regarded writers and directors of the New American Cinema. Sharp's screenplays are marked by a narrative complexity and situations gravid with implication and doom.1 Take the moment in the Arthur Penn-helmed Night Moves where broken-down P.I. Harry Moseby (Gene Hackman, reuniting with Penn for the first time since Bonnie and Clyde), after discovering a body in a sunken wreck off the coast of Florida, watches as his two sleazeball hosts (John Crawford and Jennifer Warren)--who've previously exchanged an odd nod and a knowing glance in which something is silently decided about how to handle this new, inquisitive element dropped in their midst--break into a broken tango to a tune on the radio. Harry salutes them in a way that suggests he understands what the hell is going on and shuffles off to bed. It's one of the most harrowing moments in a harrowing decade of film, and nothing much happens in it except for the look Hackman gives as a damned soul caught on the horns of an unknowable mystery. The seduction scene that immediately ensues reminds in cadence and pace of the dream sequence from Hackman's earlier The Conversation: "Where were you when Kennedy died?" "Which Kennedy?" "I dunno, any Kennedy." Hackman is anchored to this period because he so ably portrays the everyman who desires enlightenment against the pervasive belief that there's no longer hope for anything like enlightenment in this post-Vietnam/post-Watergate dystopia--that the solution to everything that's wrong in this world is, "Forget it, Jake. It's Chinatown." The slow, looping circles the boat "Point of View" describes at the end of the picture constitute perhaps the most trenchant metaphor for all of the New American Cinema.

Penn's direction is blunt and evocative, dwelling on peripheries and throwaway glances that gather in their oddities and mismatched ends a near-unbearable weight of strangeness and alienation. Harry is an ex-football player too smart for his own good--but not smart enough, until it's too late, to know that he's not smart enough just the same. When he gets back from thinking he's solved the case, he ambushes his adulterous wife (Susan Clark) to initiate a conversation about the direction he's decided to take his life. It's the retirement speech from a thousand private-eye flicks, but the evocative production design finds Harry in triplicate, through glass, off mirrors, and behind screens. Night Moves is as much the anti-Raymond Chandler/anti-Ross MacDonald as Altman's The Long Goodbye (1973) and in many of the same ways: it sees the iconic hard-boiled detective as not peculiarly flawed, but rather particularly detached. The ending of Night Moves has Harry caught between two layers of glass as he sees--and knows--everything and nothing simultaneously. It's not too much to infer a generation's frustration at death, corruption, assassination, and every other venality fed antiseptically through the glass teat--the dawning of the age of impotence. No happy endings here. No endings at all, in fact.

Harry's been hired, see, by a washed-up movie star (Janet Ward) to track down her jailbait daughter, who's fled to the Keys into the incestual arms of stepfather Tom (Crawford) and Tom's girlfriend, Paula (Warren). Once found, the only thing convincing her to go back to Hollywood is a fish-eaten corpse in a small plane at the bottom of the drink; once home, Delly (Melanie Griffith, preternaturally sexy) is killed almost immediately in a movie-stunt gone suspiciously wrong, sending Harry back to the Keys in an ultimately fruitless quest to understand any part of this puzzle. But neither is Harry the innocent, i.e., the knight in the titular series of chess moves from some long-ago match he replays for would-be fatale Paula. He uses his profession, much like Hackman's own Harry Caul from The Conversation, to serve as surrogate to the process of actualization he must undergo to resolve his issues of parental abandonment, which have led to his current difficulties with his cheating wife. Harry's often-humiliating, maybe-fatal profession repeats the nature of his NFL position, defensive back, as always-reactive, never-proactive--exculpatory, but not curious. It's Nietzsche's warning about hunting monsters taken as a requirement for a meaningful existence: the abyss needs to gaze into you. Night Moves is a quintessential Seventies picture because it indicts its audience as complicit in an entire society's myopia to the evils done in its name. Harry is representative of the heroes of this period by being actually passive when not aimlessly chasing down shadows in denial or ignorant herds of elephants in endless corridors honeycombed with endless antiseptic rooms.2

Taken as post-modernism, it's a lovely, poetic riff on how in art (as in life), expectation becomes a barrier to true understanding. The MacGuffin of Night Moves is the same as the microfilm-bearing South American juju from North by Northwest or the bird statue beneath the opening titles of The Maltese Falcon--some kind of clay effigy pregnant with some kind of contraband, representative in 1975 of the extent to which film has been entirely co-opted by the way audience expectations govern movies. Harry reaches conclusions throughout the picture, cocking his index finger and thumb in approximation of a gun--a gesture employed as surety and punctuation yet indicating mainly a desperation to not succumb to the film's entropy. It's a posture, and it's soon clear that Harry, our primary and (as played by Hackman) most sympathetic surrogate, is an outsider whose physical and intellectual gifts are entirely worthless when it comes to penetrating the calcified arteries of a society's diseased heart. We recognize Harry as following in the noir tradition of dark knights as moral avatars, though we're also asked to reconcile the idea that morality is poor sword and shield and hopelessly naïve besides in a world that's not merely fallen, but in fact some surreal, existentialist's vision of Hell. It's a detective movie in/for the age of disillusionment, as well as the crystallization of the idea that if modernism is the search for a god of, essentially, nihilism and chaos, then this post-modernism is the active worship of it. Locate in Night Moves and its brothers the seeds of films like The Dark Knight and No Country for Old Men, and consider that it took the collapse of two towers to bring the United States (after Reagan and his screen analogue, Gump) back into this golden age of bleak self-reflection and, at times, incomparable artistic expressions of fear and trembling.

THE DVD
Shot through with grain and a certain, specific colour blanch I associate with the best movies from what I believe to be the best era in film history, Night Moves looks on Warner's DVD as good as it ever has, or, I daresay, should. I couldn't detect any edge enhancement or artifacting; even the numerous night shots retain a celluloid integrity. The 1.78:1 anamorphic widescreen transfer is true, in other words, to the trademark grit of DP Bruce Surtees (Dirty Harry, Lenny, The Outlaw Josey Wales), while the DD 1.0 audio is shockingly retro in its modesty. Watching Night Moves in a state-of-the-art home theatre is akin to bringing a Derringer to a Howitzer fight. All the same, if it feeds into the lo-fi presumption of a movie that owes a great, subtle debt to the Rohmer films it denigrates in its text, well, so be it. As for extras, the disc includes the film's theatrical trailer (unusual for the period, it's exceptional) and a vintage featurette, "The Day of the Director" (9 mins.)--one of those regrettable puff pieces that purports to show one thing and ends up showing another. Although it's easily argued that Penn's true métier is his gift with actors, the bulk of the short is involved with his jubilant reactions to a plane flying overhead and a guy getting kicked into a dolphin pond. Also, fair warning to newcomers that this piece gives away the essential moment of the picture. Which is, frankly, criminal. Originally published: April 14, 2010.

1. Even Sharp's later films, like The Osterman Weekend and Rob Roy, exhibit many of the same qualities, though they're not often thought of in the larger context of one writer's career--at least part of that owing to the relative obscurity of Sharp's exceptional '70s output. return

2. Compare him to, obviously, The Conversation's Harry Caul, but also to The Wicker Man's Sgt. Howie, Law and Disorder's Willie and Cy, Chinatown's Jake Gittes, and The Parallax View's Joe Frady. return