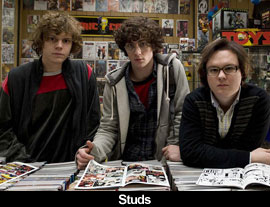 by Walter Chaw A wonderfully unlikely amalgam of Hong Kong-era John Woo and Shaolin Soccer/Kung Fu Hustle-era Stephen Chow, Matthew Vaughn's ebullient, often-unconscionable Kick-Ass reimagines Woo's iconic Tequila as an 11-year-old girl with a purple bob, an incredible potty mouth (she uses the "C" word correctly in a sentence, cunts), and absolutely no remorse in crushing a defenseless douchebag in a car cuber. Hit Girl (Chloë Grace Moretz) is destined to be an icon, a more popular tattoo-parlour fave than Calvin in evoking the cheerful, insouciant lawlessness of misdirected youth. Far from truly groundbreaking, though, sober minds could only identify her as a continuation of that quintessentially American, Huck Finn tradition of children as collective, societal Id and trickster gods. She's even employed in the picture as a punitive, apolitical, unapologetic champion of order who limits her victims to drug-dealers and gangsters, those disturbers of civilization. As her father (Nicolas Cage) clarifies in response to her unconventional upbringing, it's not his blame to shoulder, but arch-baddie Frank D'Amico's.

But vengeance for her lost youth is only a consideration for psychoanalytic critics--fun for an audience to impose, but for Hit Girl, death and other ultimate consequences are something left for the sobriety of experience somewhere outside the film's purview. For me, Hit Girl is the pure distillation of all the mischievous, violent anarchy in all my favourite ultraviolent movies, from Sergio Leone's spaghetti westerns through to Woo's "heroic bloodshed" (to which this film is a spiritual heir) and the essential, glorious childishness of the 'pencil trick' from The Dark Knight. In that pursuit, it's astonishingly satisfying that Vaughn namedrops every single reference, with a Hellboy poster decorating our heroes' favourite hangout, a proper paid to Tim Burton's Batman, and Tangerine Dream's haunted score from Risky Business used during an outré sex scene--a bravura show of knowing precisely what jerks the prurience in the pleasure principle for people hitting the sweet spot of thirtysomething.

Titular Kick-Ass (Aaron Johnson), in comparison to Hit Girl, is a far less accomplished vigilante. A comic-book geek who decides to don a scuba-suit and start rectifying society's wrongs, Kick-Ass is the Michael Cera role in a tween coming-of-age sex comedy whose eyes--whose aren't?--are on siren Katie (Lyndsy Fonseca). The story of his YouTube ascendance into the popular mythology parallels the darker intentions of Hit Girl and Big Daddy (Cage) as Kick-Ass has its cake and eats it, too--the two plots intersecting with the intervention of Red Mist (Christopher Mintz-Plasse), the son of kingpin D'Amico (Mark Strong), who attempts to infiltrate this impromptu legion of superheroes on behalf of his dad's Organization. The issue is of father figures, as it tends to be in superhero flicks, and one of play-acting, of course: the collision of fantasy and reality in comic books, sure, but in film as well. Yet Kick-Ass isn't a satire so much as a shrine--a celebration of not simply what we love when we go to the movies, but also what the movies inspire us to be on drowsy Saturday afternoons, drunk on Mexican stand-offs, cops and killers acting like brothers, and physics that bend just enough to allow our heroes to run on walls, dodging bullets in their dark sunglasses.

The particulars of the plot not half as important as its portrayals of friendship, love affairs, and loneliness aflame in the crucible of violent action, Kick-Ass boasts of three breathless set-pieces that remind that Vaughn was originally tabbed for Casino Royale and could be the saviour of that franchise again somewhere down the road. The first, confined to an apartment, recalls the claustrophobic mayhem of a Beat Takeshi joint, while the second, in its strobe-lit, night-vision ethos, suggests a first-person shooter as conceptualized by Takashi Miike. Lastly, a ballet of bullets and body-count is vintage Woo, though the soundtrack is Morricone through-and-through. All those exhausted, lazy comparisons to Tarantino are actually justified by Kick-Ass; it's not just homage, it's reinvention--what A Fistful of Dollars is to Yojimbo, Kick-Ass is to Hard-Boiled. The cherry on the sundae is that it's emotionally smart to boot, a nice Polaroid of what it's like to be fresh in lust (blood- or otherwise), and truer in that sense to the real experience of puberty than an airless recollection undertaken from a distance. Its resolutions seem earned and bittersweet, besides; and when all the dust settles/blood congeals, the intimation that there's more of this story to tell is shot through with a startling recognition that this superhero game makes perfect sense for kids feeling their way around a budding moral sextant, navigating their twisted, confused straits--but not so much adults, who need to find a better way through. All at once, Kick-Ass is about what it's like to be a kid, what it's like to be a grown-up, and that vast, unmapped space in-between that comics and movies try to bridge sometimes. Sometimes successfully. Originally published: April 16, 2010.