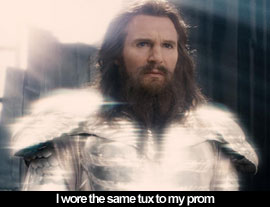 by Walter Chaw Absolutely awful in absolutely the most boring way possible, Louis Leterrier's update of Ray Harryhausen's swan song is made several degrees worse by the decision to blur and dim everything via the exhaustively-touted wonder of 3-D. Why anyone would pay 15 cents much less 15 bucks for the privilege of watching this turgid mess is beyond me, but if you go you'll find exhaustively-touted wonder Sam Worthington mashing together his last two roles as Terminator and blue cat to embody Greek demigod Perseus, who's on an incomprehensible quest to, um, get into the pants of immortal slut Io (Gemma Arterton), I think. Familiarity with the source mythology actually a terrible impediment, better to take this Clash of the Titans at face value as Perseus sees his adopted family murdered by Hades (Ralph Fiennes) and petulantly rejects his newly-discovered status as the Son of Zeus (Liam Neeson). Hades, meanwhile, hatches a half-assed plan to freak out the good people of Argos in order to steal followers away from Zeus, making one pine in the process for not only the better-than-you-remember original, but also a couple of hours in front of any "God of War". All of which results in Perseus traveling a long way to somewhere ill-defined so as to encounter giant, domesticated scorpions, people covered in bad wood makeup who remind a lot of the Cyclops from zero-budgeted craptavaganza Krull (which also featured Liam Neeson in a bit part), and a CGI Medusa that makes Uma Thurman's recent snake-haired turn in The Lightning Thief seem, erm, deep. For my part, I kept waiting for the moment Perseus shoves his black Pegasus's tail up his ass before he can ride it. Fear not, the Kraken is released and revealed to be an aquatic Cloverfield that spends a lot of time sort of flailing around waiting for Perseus to kill him. Spoiler alert: he does.

The traveling party accompanying Perseus is composed of the battle-hardened vet, the green recruit, the pretty boy, and the old guy, with the old guy making the bulk of ironic observations. (Each inevitably ends up Gorgon bait of some variety.) Throughout, there's a peculiar chastity to the enterprise--especially compared against the 1981 (and, ironically, more leniently-rated) picture, which had the audacity to show tits and ass en route to showcasing Harryhausen's magnificent stop-motion phantoms. It's not the "reality" of the special effects that's important, really, so much as the quality of the story. Thus when the effects are at the service of the story, there's a timeless quality to it that's missing in films in which the story is at the service of the effects. Case in point, old episodes of "Dr. Who": some of the worst special effects of all-time, yet still somehow devastatingly effective because of the strength of the stories they bolster. Of course, it doesn't hurt that Harryhausen's a frickin' genius. His Medusa, the prototype for Leterrier's serpent fatale, is all menace and anthropomorphized rage, while his Calibos is blessed with a nefarious plan to abduct a lovely lady's soul every night in preparation for disturbing eternal matrimony. This time around? There's no love in it. The only thing this new film really has going for it is that it's so bad in every respect (save Fiennes, who's always a little interesting, let's face it) that there's no sport going after it. The action scenes are incomprehensible, the dialogue is unforgivable, the plot is a hermetically-sealed puzzle box with no hope for nor interest in a solution, and then it's over. In 3-D! William Castle, eat your heart out.

The essential problem with the current 3-D fad is the same one that afflicts any innovation: just because you can doesn't mean you should. In the case of Clash of the Titans, the extra dimension only serves to render what's already difficult to follow impossible to follow. Though, frankly, I can see how the film is caught on the horns of the dilemma that it's likely no one would watch it at all if not for something implicitly novel about its presentation. Fans of the '81 version will be sorely disappointed by a key moment early on as clockwork owl Bubo is found in a pile of rubbish, only to be discarded offhand by a briefly-curious Perseus. Meant as a knowing in-joke, it comes off as deeply disrespectful to the picture's own legacy and, worse, to Harryhausen--a statement that this Clash of the Titans is going to "kick it up a notch" by over-shooting, over-editing, and smothering the screen under an avalanche of banal CGI. It occurs to me that the best remakes (like Zach Snyder's Dawn of the Dead and Breck Eisner's The Crazies, to name two recent examples) are those that strive to retain the spirit of their inspiration rather than doing their best to show how far technology has come in the intervening decades. It's especially glaring when the source is the actual, literal definition of archetype: the Greek myths are essential and ageless, so it's best not to sacrifice them at the altar of a gewgaw that's, frankly, instantly dated the moment it's done. This Clash of the Titans is notable for no other reason than that it would be a cautionary warning were it not already too late and forgotten even as it unfolds, besides. Aside from sucking all by itself, its instant obsolescence is a far cry from the original's feeling of valedictory and melancholia. Originally published: April 2, 2010.