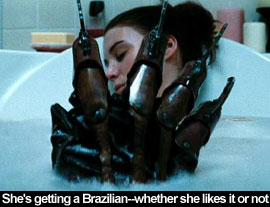 by Walter Chaw Listen, I like remakes. I think that for the same reason no one complains about a new production of "Hamlet", no one should complain about the umpteenth iteration of Invasion of the Body Snatchers. I like the new Dawn of the Dead better than the original, the new The Manchurian Candidate almost as much; I'm not trying to start an argument, I'm simply saying that I don't hate the new A Nightmare on Elm Street on principle. I hate the new A Nightmare on Elm Street because it really sucks. Samuel Bayer's ridiculously amateurish take on the franchise earns the only nod it deserves by going all the way with the loathsomeness of its Freddy Krueger (Jackie Earle Haley). Otherwise, it's strictly jump-scare theatre, a geek leaping from the bushes, clashing cymbals, in the very imitation of a jack-in-the-box for ninety soul-sucking minutes. For what it's worth, it drags its claw along the text of the Wes Craven original pretty faithfully, down to recreating a few of the kills and resurrecting the iconic body-bag sequence, all to drastically diminished returns. To say the movie's not scary in the slightest is both a surprise and not at all a surprise. But it is a shame, considering that Craven's oneiric A Nightmare on Elm Street is an inventive, nasty little low-budget chiller with enough of a thought in its head to germinate a beloved franchise and a proud member of the bogey pantheon.

Begin with mopey Nancy (Rooney Mara), waiting tables at an all-night café for the bemusement of classmate admirers and hangers-on when hunky Dean (Kellan Lutz) appears to kill himself over a cup of old coffee and, we presume, one of them pieces of apple pie with a slice of American melted on top. It's all so very Edward Hopper, thinks director Bayer, and it leads into the interminable series of "am I dreaming" shuck-and-jives that comprise the rest of it. There's too much talk, the faux mood is pasted-on like one of those MBW pop-art products™, and decades of knowing what Freddy looks and acts like means that his delayed entrance doesn't establish tension so much as it inspires a crippling case of clock-watching. The picture's a bit of a cock-tease, too, in that it's not creative in its gore, and when it does splatter blood, it's of the knob-cheesing CGI variety--never mind that the filmmakers lack even the decency to offer up some tits à la the also-terrible Friday the 13th reboot. There's nothing to recommend it, then, except a narrative for dummies that has people not believing people until they do, people falling asleep in the damnedest places (I love the nap hero nerd Quentin (Kyle Gallner) takes while swimming laps), and this desperate, deadening repetition of situations and resolutions that speaks volumes about the creative vacuum at the middle of this thing.

Haley is excellent for what he's given, but he's not given much. The moments in which he's not being sped-up or flash-edited into inconsequence--when he's allowed to deliver a line like the famous "I'm your boyfriend now!"--reveal a glimpse of what could have been. He's disgusting and unrepentant, a bit of a bully, and, posing as he will throughout the film as a teacher at a blackboard, representative of the kinds of real nightmares parents have for their children. Ideally an allegory for what kids can't be protected against (Craven's film is the spiritual sequel to his own Last House on the Left), A Nightmare on Elm Street, in its dunderheaded way, decides instead to be post-modern, making references to stuff like Pulp Fiction and The Frighteners in the reflexive way of morons grasping at straws. A piece with the stink of failure reeking out of it in a fetid stream from its deeply familiar prologue through to its deeply stupid resolution, it inspires this yearning to watch movies that did this material right. (Count that as a positive, I guess.) Not the 1984 version, necessarily, but stuff along the lines of Bernard Rose's Paperhouse and Candyman; one can only imagine what a Rose-directed Elm Street might be like, expecting at the least soulfulness and tragedy, as well as a real fear stemming from an understanding of exactly how helpless we are once we release our children into the world. Be grateful, at least, that when it ends, A Nightmare on Elm Street is like a dream upon waking: poof, and it's gone just like that. Originally published: April 30, 2010.