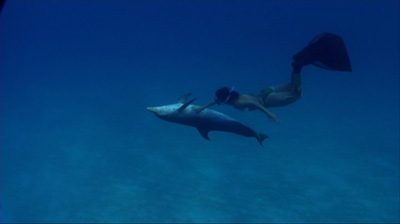 by Jefferson Robbins Critically assessing the environmental documentary is often a hard road, because it forces you to bear the competing tensions of shame, anger, and self-righteousness. You know you're part of the problem as you sit there spinning a petrol-derived video disc, typing on a laptop with tantalum capacitors strip-mined from Africa, but, damnit, you didn't personally spit-roast those lemurs. The best you can hope for, usually, is some beautiful photography, a compelling story, and a degree of responsibility on the filmmakers' part--a commitment to balancing science and passion in respectful measure.

The acclaimed documentary The Cove unites objective fact with one man's personal drive and sports some gorgeous underwater photography. Ric O'Barry spent years as one of the most influential dolphin trainers in the world, coaching the animals who would portray Flipper in the movies and on TV. His bond with the creatures politicized him, particularly after one of the original Flipper dolphins apparently committed suicide in his presence by simply refusing to breathe. Recognizing his own role in popularizing live dolphin shows--a financial incentive for their removal from the wild--O'Barry has spent decades campaigning against the animals' captivity and, per this film's focus, their slaughter.

Wildlife photographer and oceanic activist Louie Psihoyos accompanies O'Barry to the Japanese whaling community of Taiji, where O'Barry has identified an appalling industry of dolphin butchery. Whole herds are corralled into a rocky cove and put on show for buyers and trainers from dolphinariums around the world, with a price tag of up to $150,000 per head. Rather than be released, those not sold are speared to death, their mercury-laden meat distributed on the Japanese market. It's of a piece with Japan's overall hostility towards cetaceans, and because the impotent International Whaling Commission doesn't classify dolphins among the creatures it safeguards, political efforts to end the practice are easily shrugged off. "We have never heard a convincing reason why this species is so special," says Japan's IWC delegate Joji Morishita, who also argues that dolphins are a primary cause of commercial fishing declines. Even the whalers' lawyer-lobbyist, Dan Goodman, seems to flinch at repeating such crap.

Psihoyos and his crew come off like Special Forces surf bums--indeed, their effort is produced under the aegis of Psihoyos's Oceanic Preservation Society, dubbed OPS ("Ops") for short. A crack team of freedivers, sound engineers, Hollywood craftsmen, and rock promoters get involved in the effort to plant hidden cameras that overlook the cove, monitor its fishing base on the beach, and view the water from the bottom of the lagoon. All this leads to some startling images, such as blood staining the water like an oil slick and clouding its depths like silt. Just when you think that's the capper, you notice one of the fishermen actually has the stamina and shrivelled soul required to snorkel in the blood, hoisting up dolphin corpses that sank to the bottom. His peers cluster on the beach, smoking and lamenting the good old days when dolphins and whales swarmed the seas in multitudes. Talk about lack of insight.

This is powerful exposé activism that unfortunately doesn't happen without wit, daring, and no small amount of money. The special housings that disguise cameras as rocks are designed and built by Kerner Optical, formerly a division of Industrial Light & Magic. Jim Clark, the billionaire founder of Netscape, finances OPS. While the project carries great risks, on film it starts to feel like the kind of maritime adventure-dilettantism favoured by the very wealthy.1 (Did you know Paul Allen's city-sized yacht has its own submarine?) As with news reports about drug eradication, I found myself longing for The Cove to explore demand, visiting those sea parks that buy the Taiji dolphins before their comrades are gaffed to death. Ric O'Barry is a conflicted hero, too known and hated in Taiji to take direct part in the surveillance operation. That's a shame, because the lively motivator for the documentary ends up as second fiddle to the soul-patched boys and flashy toys executing the caper of his dreams. Yann Arthus-Bertrand's Home never delves into the ocean. Instead, the film drifts above the Earth like a windborne sylph. Home delights in its vantage point, sweeping over volcanic calderas, scabby mountain ranges, glacier fields, and coral reefs. It makes wide landscapes look like bacterial slides, then zooms in to make diminutive humans look like herds of slow-moving micro-organisms. The fluidity and scope of the gyro-mounted camera is a master class in aerial photography. Glenn Close might as well be Uatu the Watcher for all the passionless omniscience her narration2 conveys--a smart choice, designed to not detract from the vistas onscreen as she catalogues the ancient ecological systems disrupted by humankind's brief tenancy on the planet. Home, like The Cove, has a distinct agenda: to narcotize us with natural beauty and then savage us with our sins. A glimpse of a sheep herd that's denuded a hillside is arresting; a cattle lot from the air is the most depressing sight imaginable, save that of a mundane American suburb which follows. Arthus-Bertrand surveys Dubai, a city built out of no local resources whatsoever that reminds of William Gibson's future-now megalopolises. When the camera first encounters a jet of fire from a jungle oilrig, it hugs the ground in apparent fear. The shift from aerial to terrestrial viewpoint is a shock, as though this harnessing of primal fire has knocked an angel from the clouds.

To watch The Cove and Home back-to-back is to feel like a character in John Brunner's novel The Sheep Look Up: badly fed, overheating, breathing in wondrous new toxins that used to be air. Of the two, Home is arguably the more successful, in its application of the camera and its direct, noiseless message of stewardship--no messy dolphin blood to scrub off, yet still a lot to think about. Despite a hopeful coda, the film doesn't undermine itself, and unlike The Cove, it doesn't end with dolphins swimming free to the head-slappingly literal accompaniment of David Bowie's "Heroes."

THE DVDs
Sadly, Home is ill-served by Fox's stateside DVD. The Cove looks like it belongs on television, albeit on an HD channel; shot with the Cineflex HDCAM, Home seems to need a full cinema screen, or else I need to break down and get a Blu-ray player. The DVD doesn't upconvert well on my 1080p display, but even there it's less rippled than on my standard TV. It looks best on my MacBook screen, which is humbling for such a large-scale production. Meanwhile, there's a flaw in the English DD 5.1 soundtrack, as a mild room tone or tape hiss enters the mix whenever Close speaks. (I find no such intrusion in the French narration, laid down by Arthus-Bertrand and Jacques Gamblin.) Home is also available on BD; I bet it looks amazing.

Released on identical DVDs by Maple in Canada and Lionsgate in the U.S., The Cove has the challenge of shooting high-definition video in both surface and underwater environments, using standard, night-vision, and thermal-imaging techniques. All these approaches meld together pretty seamlessly, and on disc the underwater scenes, natch, are the standouts. Freediver Mandy-Rae Cruikshank's ballet with a whale is particularly compelling, though whether the filming happens on the Taiji shore or in the Caribbean conference hall where the IWC meets, it plays crisp and warm on my display. As for the DD 5.1 audio, Psihoyos tends to mix the sound conservatively, with the action and dialogue in the front channels and the bass and percussive elements of the score in the rear. Something about composer J. Ralph's Moby-lite soundtrack rubs me the wrong way, but damned if I can identify it.

The lack of extras on the Home DVD means the film doesn't trip over its own supplementals...again, unlike The Cove. Psihoyos and producer Fisher Stevens (carving out a nice second life for himself in non-fiction film between this and Crazy Love) sit down for a yak-track. Psihoyos admits he didn't want to be onscreen in the movie, but editor Geoffrey Richman and writer Mark Monroe recommended using the night-mission footage to add a thriller element to the finished work. We learn that Tetsuya Endo, a scientist who in the film discusses the astonishing levels of mercury in commercially-available dolphin meat, later distanced himself from The Cove, saying it was anti-Japanese. Beyond saving dolphins, Psihoyos claims he most wanted the documentary to expose the mercury poisoning inherent in their consumption.

This campaign leads the package to its downfall with the add-on mini-doc "The Cove: Mercury Rising" (19 mins.). The heavy metal gathers up the aquatic food chain until dolphins are saturated with it, and beginning in the 1950s more than 2,000 coastal Japanese suffered the neurological effects of mercury poisoning now called Minimata Disease. The piece also looks at exposure among affluent U.S. consumers of sushi and at the mercury preservatives used in vaccines--and with that, we're in Jenny McCarthy's territorial waters. Psihoyos and environmental advocate Robert F. Kennedy, Jr. draw the junk-science "link" from vaccines to autism, although Kennedy acknowledges "nobody knows what's causing the autism epidemic." Psihoyos heavily implies causation where there's only correlation. "The Amish don't believe in vaccinations," he says in voiceover. "Incidents of autism among the Amish are almost nonexistent." "Almost"--so that means there are some, right? Where'd they catch that, from kissing Harrison Ford? The naturopathic alarmism riding The Cove's coattails is almost enough to castrate the film by association.

In further bonus features, watch Psihoyos and company play with their Batman toys ("Special OPS Cameras" (9 mins.)) and observe the Discovery Channel-worthy whaleplay of "Freediving" (5 mins.), which will do nothing for you unless you're already an enthusiast. Deleted scenes (10 mins. total) include a lengthier sit-down with Dave Rastovich, founder of Surfers For Cetaceans, who recruited Hayden Panettiere and the DeceptiSlut from Transformers: Revenge of the Fallen for a surfboard sit-in in the Taiji cove. The segment was heavily trimmed in the finished film, probably for a few reasons: it repeats that stunning overhead shot of the blood-filled lagoon; Rastovich's coven is too good-vibey and postmodern-pagan for mass consumption; and the headgear-camera footage sucks. Elsewhere, O'Barry dresses in drag to avoid local cops (or is it a joke for the cameras?), while B-roll from the Taiji Whale Festival features lots of little kids eating dolphin cutlets. Yum! The original theatrical trailer (2 mins.) is on board as well, plus forced startup trailers for The Stoning of Soraya M., The September Issue, More Than a Game, Facing Ali, and Good Hair. Originally published: January 5, 2010.

1. Home too springs from deep pockets: its chief financier is the PPR Group, holding company of Gucci, Balenciaga, and other luxury lines. I grow nervous, between films like this and the story of Greg Carr's self-funded rescue of a Mozambique nature preserve, that true environmental protection will one day devolve entirely upon the rich. God help us then, not to mention now. return

2. Close's narration does seem too literally translated from the original French in places: Earth is "similar to so many similar clusters in the universe"; with the exploitation of oil, "The pocket of sunshine's energy chased away the spectre of drought that stalked farmland"; and so on. return