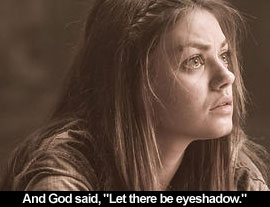 by Ian Pugh Let's start things off by lifting the veil of mystery surrounding the titular book and thus reveal the transparent secret upon which the film hangs its interminable first act. It's the freakin' Bible, all right? You're going to realize it from the very moment the all-important book is introduced, but you're expected to play along because The Book of Eli is deep, and everything about this film--including its simpering attempt to transcend genre--labours to play up that depth. It isn't exciting, it isn't transcendent, and it sure as hell ain't deep. This little sucker is meant as a western, its post-apocalyptic setting serving as mere window dressing for dialogue about The Time Before and The Flash and The War and how humanity's lust for excess got them into that mess. (George Miller was able to squeeze more eloquence from the idea by throwing a bunch of big rigs into a squabble over gasoline; he reserved all that pithy dialogue for his feral children.) Worse than that, however, is that the plot has been cobbled together from practically every western made prior to Unforgiven (it's closest to Eastwood's own cliché-ridden, quasi-spiritual Pale Rider, if you're starved for a direct analogy), with knowledge and religion standing in for the encroaching railroad. If that doesn't sound like the most bountiful wellspring of ideas, well, the script would appear to agree with you. "It's not just a book, it's a weapon," the diabolical Carnegie (Gary Oldman) growls upon recognizing his long-sought-after prize. Alas, The Book of Eli spends the rest of its two hours trying to find new ways to reiterate this--and the more it repeats itself, the farther it strays from that point.

Thirty years have passed since The Flash/The War/what-have-you destroyed civilization, taking just about every Bible along with it in a jealous book-burning rage. A Kmart employee (!) in a previous life, Eli (Denzel Washington) is now a lone badass designated by God to carry the book "west," leading him to Carnegie's one-horse town. There he meets a blind woman (Jennifer Beals) who insists that her ignorant daughter (Mila Kunis) will be safer with him--cinematic blindness being a tortured but resilient metaphor for an expanded consciousness--and together they head for parts unknown. They'll have to stray off the beaten path in order to avoid Carnegie and his men, who want the book to unite the remaining world as an obedient congregation. There's a scary amount of potential in that scenario, isn't there? But there's a reason the picture's no more effective than, say, the kindly domestic cannibals named, sigh, George (Michael Gambon) and Martha (Frances de la Tour), who are pretty clearly meant to represent the fucked-up apotheosis of the American Dream. It's nearly impossible to mistake the filmmakers' intentions here, and it's precisely that obviousness, that unwillingness to make any abstract choices whatsoever, that makes The Book of Eli such a chore to sit through.

The film's lackadaisical approach extends to its casting decisions, its dramatis personae consisting almost exclusively of capable actors sorely out of their element. Washington seems a natural choice to play a Man with No Name, but he misinterprets the Eastwood aura as straightforward indifference. Kunis's general demeanour might have made her an heir to Natalie Wood, but she exudes palpable discomfort alongside co-stars far out of her league. And while Carnegie may as well have been written specifically for Oldman, the character lacks the challenge that would pull a great performance out of him. However, what makes The Book of Eli uniquely terrible is that, for all its touted understanding about the power of religion and good ideas gone bad, it leaves every little hint of complexity at the mercy of divine intervention. Even after Eli realizes that his loner's philosophy runs contrary to the book's message of altruism, the film bears the message that it is literally impossible to misinterpret or misuse the Word of God--that the Almighty Himself will speak directly to those who "get" it, while those who wish to exploit it will simply be unable to understand it. It's not like you have to dig through history to find the holes in that theory, right? If you think the much-hyped twist ending is going to tie everything together and forgive Eli of its sins, you've probably already forgotten that the movie's idea of a great twist is that it's the freakin' Bible. Originally published: January 15, 2010.