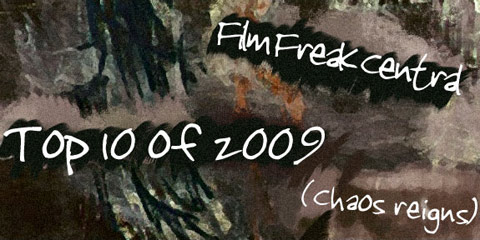 The last year of any decade usually a watershed year, we come to the end of 2009 with a bounty of riches. A year that just a couple of months ago I feared wouldn't yield ten films from which to choose has, through a flurry of screeners and late-season additions, convinced me of its cinematic legitimacy. Find in the top ten three war films, five films about the state and politics of the modern family, one about a poet, and one about a cop. Discover that each of the first ten has a direct corollary in the next ten (suggesting that there's a good bit of synchronicity in 2009), and that although women directors remain a novelty, three penetrate the top ten for the first time in my decade of lists. Other threads include a continuation of the last two years' feelings of disconnection and entropy indulged, the notion that institutions of right are the ones perpetrating the bulk of atrocity, and investigations into the self that mainly fulfill Nietzsche's maxim of abysses looking into the lookers. It's a summary list, in a way, of the '00s.

As we step bravely into 2010, we see how we consume movies change for good. It's only a matter of time, really, before physical media is a thing of the past. It's only a matter of time before studios realize that critics are expensive, but uploads direct to television are cheap; rather than extinguish us, they extinguish publicists. Because the real revelation isn't that critics are expensive, but that screenings, especially loaded screenings, are. I saw five of the films on this list through Netflix's streaming video service--that's a full quarter of the top twenty of 2009. I look forward to the day a decade or so down the road when I'm given the opportunity to call up something like, say, House of the Devil for easy screening on repertory. Whether exhibition can thrive in a streaming world is part of a longer conversation we're not going to have until it's too late. It's too late already.

Dishonourable mentions: Avatar; Transformers: Revenge of the Fallen; The Blind Side; Precious... Essentially every mainstream treatment of race after a couple of great years of the same. (Not to mention Crazy Heart, which sucks no matter how good Jeff Bridges is in it, and The Lovely Bones, a disgrace.)

Notably missed: Vincere; You, the Living; Disgrace; The White Ribbon

20-11: 20. Sherlock Holmes; 19. Star Trek; 18. In the Loop (a sharp, acidic, brilliantly- written and structured political satire, if already a little musty); 17. Police, Adjective (crime procedural as stream-of-consciousness trance); 16. District 9; 15. The Headless Woman (Repulsion by way of Fellini); 14. Summer Hours (another great Gallic flick about family at the end of the world following last year's A Christmas Tale); 13. Tetro (Coppola's back, most of the way at least, with a visually audacious autobiographical freak-out starring ace creepy-guy Vincent Gallo); 12. Two Lovers (James Gray's lovely and surprisingly sticky tale of misfits in the city); 11. Tokyo Sonata

10. The Bad Lieutenant - Port of Call: New Orleans (d. Werner Herzog)
Herzog finds the perfect insect to essay in Nicolas Cage's dark angel of the bayou. Weird? Totally weird. Also feral and relentlessly alive. It reminds me a lot of fellow German New Waver Wim Wenders's Million Dollar Hotel, which gains in the rearview alongside Wenders's wonderful The End of Violence. (What is it about German filmmakers and cyborgs?) Predictable is Herzog taking this opportunity to go to the post-Katrina Big Easy and document the amazing corruption (governmental, societal) rampant there. It's a deeply American film; the only other filmmaker alive who could have done it as well is fellow non-American David Cronenberg.

9. The House of the Devil (d. Ti West)
The House of the Devil rocks on so many different levels that it's hard not to rave on. Start with gorgeous Jocelin Donahue as the heroine who, in this '80s-throwback slasher flick, is the spitting, heartbreaking image of Karen Allen in Starman or Jessica Harper in Suspiria. (Bonus: she can act.) She's in nearly every frame and the way we connect with her is the tether that holds us to this film all the way through to its unsurprising, but surprisingly affecting, conclusion. A moment in which she blisses out to The Fixx's "One Thing Leads to Another" is maybe my favourite in a year full of crystalline, defining moments (Watchmen's title sequence, Up's prologue)--and the tremendous tension director West achieves throughout is testament to the power of negative space. A beautiful-looking film, a smart genre exercise (note Dee Wallace's cameo), and scary as fuck to boot. As experiments go, compare it to the one-trick pony of Paranormal Activity for a treatise on how these things are done.

8. 35 Shots of Rum (35 rhums) (d. Claire Denis)
Denis's ongoing work chronicling the lazy backwards and forwards of interpersonal relationships gathers around a man and his daughter as they come to terms with the necessity of moving on without one another for the rest of their lives. It's a beautiful thing, fraught with sadness and better than Assayas's Summer Hours in restricting itself to painting in small, meticulous brushstrokes. Comparisons are being made to Ozu, but Denis is something all her own--if every bit as careful with the gravity of her objects and their interactions in holy space.

7. Bright Star (d. Jane Campion)
The image of one Fanny Brawne (Abbie Cornish) in a field of lavender, reading a letter from John Keats (Ben Whishaw), is enough to make even the non-Romanticist swoon. From the very beginning, Campion has been an artist involved in the diagramming of how art maps out the architecture of sublimity--you see in Bright Star the floods of emotion that drench all her lovely, delicately-edged pictures. She returns here to her triumphant An Angel at My Table, porting over Kerry Fox to play Fanny's long-suffering mother, who can't quite understand the alchemy of estrogen and a season in the Lake District that would lead her daughter to fill her room with butterflies. Bright Star is Twilight for smart people--people who've actually been in love and who've read two words that actually make sense together.

6. A Serious Man (ds. Joel & Ethan Coen)
The Coens deliver an extraordinarily thoughtful, philosophical movie that speaks loud to the desire--ever-growing--for faith in a world without much evidence for such. Here their trademark nihilism is salved by what's almost a celebration of an individual who perseveres--not in the way of a Jerry Lundegaard, but in the way of someone just looking for the secret to eating as little shit as possible from one episode to the next. In that way, it becomes a lovely, borderline sympathetic film about the difficulty of existence. No accident that an abundance of humanity attends the suffering the Brothers are so fond of doling out in this, probably their most autobiographical picture. A Serious Man is their Shadow of a Doubt.

I've decided to let my reviews of

speak for themselves, which brings us to

3. The Hurt Locker (d. Kathryn Bigelow)
I was an avowed fan of Near Dark but wondering if, after the nominal successes of Blue Steel, Point Break, and Strange Days and the nominal--some would say outright--failures of The Weight of Water and K-19 The Widowmaker, Bigelow would ever make its equal. Along comes The Hurt Locker to finally establish her as an artist independent of Eric Red and, especially, notorious ex James Cameron. It's taken a while to shake off the yoke of the latter, but compare any ten minutes of the film against Cameron's Avatar to understand the places she's grown. Jeremy Renner does the mainstream version of his performance in 28 Weeks Later and finally wedges his way into the popular consciousness. He plays a munitions expert defusing IEDs in Iraq not as a reluctant soldier, but as a cowboy addicted to that millisecond away from oblivion. Glib to say it, but, post-9/11, aren't we all? It's the first film in my short-term memory that immediately addresses our handshake agreement with the world that airplanes fall out of the sky now with a purpose--that Day the Earth Stood Still ultimatum that we toe the line or something is going to blitz us as we sleep. The titular locker is a box containing the identifying markers of defused bombs. Keepsakes, you could say, of the pieces of our possible apocalypses we hold now against our hearts. It's pretty great.

2. Red Cliff (d. John Woo)
This refers to the complete five-hour version, not the one sanitized for round-eye consumption. John Woo's magnum opus, Red Cliff adapts one of the four Chinese epics (Romance of the Three Kingdoms)--think the Chinese Iliad--both faithfully and passionately. Its discussion of medieval battlefield tactics reminds of the same care taken in Randall Wallace's We Were Soldiers, while all that chaff trimmed away for the American release reveals itself to be obsessed with the relationship between general Zhou Yu (Tony Leung Chiu Wai, one of the world's great stars), his coterie of advisors, and his pregnant wife. Though the set-pieces are predictably epic, the scope of the story is presented with the kind of focus we've come to expect from Woo and his Hong Kong pictures--the bulk of the time devoted to what men do when they love and admire each other. It's Woo's restraint here, his comfort with this material and what seems like pride, that marks Red Cliff as a defining work. Moving, stirring, and essentially Chinese, the picture is proof that big-budget, CGI-heavy epics don't have to be pieces of expensive shit, James Cameron. Naturally, it's not allowed to land on these shores without serious editing, a voiceover introduction, and title-cards identifying the guys because who can tell them apart?

1. Where the Wild Things Are (d. Spike Jonze)
Not much to add to my theatrical review, except to say that this is the exact film I'd choose as the decade's coda. It understands childhood, film as a transformative medium capable of great complexity, and how frightened we are of the kids we love. It defies easy explanations, its key hidden somewhere in the guts of the thing, and it has the grace to land its blows with a simple lack of pretension that ennobles the source material. Where the Wild Things Are is an all-timer.