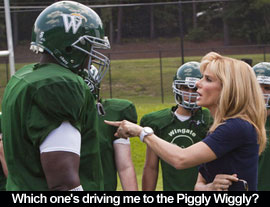 by Walter Chaw Just in time for Christmas, professional schmaltz peddler John Lee Hancock updates Richard Pryor's The Toy by giving another privileged white brat a black man he can fuck with, call his victories his own, and keep in the guest room. This Michael Oher--as played sub-vocally by gentle, Lenny-ian giant Quinton Aaron--is not only the Super Duper Magic Negro who heals a household of rich shitkickers ("Shoot! We done gots a Black Man living with us 'fore we ever even MET a Democrat! Hoot!"--forgetting that wealthy southern landowners have a long tradition of keeping black people on their grounds without commensurately progressive attitudes), but is the passive, mute object around which every single person who likes The Blind Side convinces themselves they aren't racist for the liking of it. If this movie doesn't piss you off, if it doesn't make you nauseated with its dangerous smugness, you're part of the problem.

Completely shoved to the sidelines in a film that's about him, Big Mike, as he hates to be called, is upstaged by a mugging, white knickerbockers-wearing Sandra Bullock as iron maiden Leigh Anne Tuohy, who one day takes pity on hulking, wet-dog Mike and brings him home to live with her in her mansion. There, in his awkwardness and unassailable innocence, he promptly earns one of Leigh Anne's patronizing doe eyes and teaches the family how to sit around a dinner table again, say Grace, and get sanctimonious with any friends who stupidly question the wisdom of bringing a boarder with an abusive, deeply-troubled past into the same home as young children. Leigh Anne snarls self-righteously, invoking her Christianity in the same breath as her humble charity; it's not that she's changed Big Mike's life, it's that Big Mike's changed her and her whole family's life. This kind of openly hostile, virulently racist solipsism--this putty of well-meaning cheese wrapped around a brickbat of condescension and self-satisfied, religiously-bulwarked ignorance--is at the heart of every single thing that's wrong with modern pop Conservatism. There's no attempt to understand Mike ("Honey, his gift is his ability to forget!" then, later, "The past is gone! The world is a good place!") or his culture--better to replace it whole with Southern Culture on the skids. Better to be a white, ultra-conservative Christian asshole than a black anything.

Michael, it seems, has emerged fully-formed from the white man's nightmare of The Ghetto, a place lousy with do-ragged gang-bangers and weepy/noble single-mammys bemoaning the crack-addict baby-daddies who left them with thugs-in-training in dire need of a white saviour. With the Tuohys, Michael gets his first bed and first glimpse of football, where, ultimately, he'll be drafted into the ranks, as an underprivileged black man, to entertain a stadium full of 70,000 richer (at least, relatively) white people. He'll amuse us, in other words, the same way this caricature of him amuses us in The Blind Side. To help him hit his books, Leigh Anne hires a patronizing tutor (Kathy Bates) who at one point is thisclose to explaining what a pen is to her docile charge. And to help him hit his blocks, Leigh Anne explains football to him as exactly like protecting a family--or little kid S.J. (Jae Head, appalling)--from an exploding airbag in the truck the Tuohys have bought for him. Without whitey, see, Big Mike wouldn't be able to read, write, play football, drive, feel wanted, have a family, or earn a bazillion dollars engaged in a brutal bloodsport that boasts zero blacks in majority ownership positions.

But The Blind Side doesn't want to talk about anything resembling ambiguity, doesn't want to talk about Oher's past and his struggles--doesn't treat this based-on-an-actual-person like a character so much as a grinning, beatific, yassir/nossir phantom, Bagger Vance-like, his only purpose to edify the Man. The two choices for black men in this film are to be professional athletes or dead by drive-by; and the only way for them to survive their own disgusting culture is to be adopted by white people. Who is Michael Oher besides the giant dude Leigh Anne Tuohy decided to champion on the same sort of whim we imagine she has upon deciding what colour to paint her bedroom? As for Leigh Anne: when Hancock isn't having her out-spunk and castrate her limp noodle of a husband (Tim McGraw), he's having her out-spunk and castrate a drug dealer in The Ghetto for the soul of her big black son--his soul more her property at this point than Michael's. The sense overriding the enterprise is one of exasperating entitlement--manifest destiny as applied to an entire culture as it asserts itself over another in an act that can only be seen as pathological fundamentalism. If there's importance in something as odious as The Blind Side, it's that it's a fairly useful illustration of American foreign policy since 9/11, this deadly indifference to the will of the rest of the world while certain fundamentalist values are imposed on them through overwhelming, relentless intimidation and cajoling.

Nobody asks Big Mike what he wants. Does he want to attend the Christian prep school he's graciously allowed to attend? Does he want to play football? To stay in a guest room as a de facto live-in nanny? To go to college at all, much less Tuohy alma mater Ole Miss? When The Blind Side finally asks him, he responds that the cultural hegemony has brainwashed him completely and of course the only thing he wants is what the family wants. The Blind Side is a horror movie about animals that can't help the way they are preying on an animal without the armour to resist--bigotry as a breed of parasite, if you will, and if there's something ineffably cool about the movie, it's that it, itself, is an animal programmed in its mute imbecility to be destructive, latching onto its host the audience and, often without the host realizing (or minding), eating it whole from the inside. Here's another poison pill, fast on the heels of New Moon, packed with a payload of prim, knees-together ideologies that cast the United States in an absolutely horrific light. What would the same assholes who love this movie say about a Kabul-made film in which fundie Muslims save a white kid from Indiana with dangerous misinterpretations of The Qur'an and teach him how to rock it at Buzkashi? Institutional racism as inspirational melodrama, it's regressive entertainment, our very own Triumph of the Will. Our endorsement of The Blind Side as a culture should be the first exhibit the next time our arrogance shoves our backs against the wall. Originally published: December 2, 2009.