The Gary Cooper Collection: Along Came Jones; Man of the West; The Pride of the Yankees; The Westerner - DVD

by Jefferson Robbins I thought Gary Cooper was broader. The way he carried Hollywood on his shoulders from the silents through the talkies to the threshold of the New Wave, you'd expect him to be broader. Instead, he was the definition of lanky. Where his centre of gravity lay was in his Rushmore of a face: in close-up, he's an impossible granite monument, like that ever-unfinished Crazy Horse memorial in South Dakota; in full shot, in his prime years, he's a broomstick supporting a boulder. 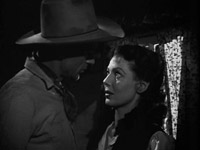 MGM mines its back catalogue for "Gary Cooper: The Collection", a four-film DVD set for viewers, like me, who know the legend but not its roots. Until now, the only Coop I'd consumed with any degree of attention was For Whom the Bell Tolls, and that was research for an essay on Hemingway. Maybe it was the sweep of the Spanish Civil War, or his death in a hail of bullets and voiceover, that made the star seem wide across the shoulders, but riding crook-backed into view against some awful rear-projection in Stuart Heisley's Along Came Jones, the movie sequenced first in this package, Cooper looks painfully thin. His slimness is a plot point, as his aimless cowpoke Melody Jones is mistaken (by his ectomorphism and by the initials burned into his saddlebag) for wanted desperado Monte Jarrad (Dan Duryea). Falling prey to the American yen to be somebody and win the girl (Loretta Young, made of cut glass), he plays up his new identity--against the advice of partner Charlie Fury (William Demarest). "I was mixed up in a little shootin' once," Fury warns, getting one of the best lines in Nunnally Johnson's script. "I just can't tell ya how quick I got sick of the whole idea." Cooper surprises, on first viewing, by playing the clown throughout, until cowboy comedy rubs against rangeland drama and Melody finds unforeseen strength in his assumed identity. He smoulders in his love scenes and outsmarts one western character type after another (the best of them Willard Robertson as a matter-of-fact enforcer) until his final confrontation with the real Jarrad, now become his shadow-self. The only reasonable strategy for Jones, who couldn't hit the hind end of his horse with a handful of buckshot (to paraphrase Fury), is to allow himself to be surgically taken apart in a gunfight. Exacting something of a price from its hero, Along Came Jones won't let us laugh long at a fool impersonating a criminal. There's a responsibility to taking up the gun, even in jest.

Anthony Mann's Man of the West leapfrogs this collection to the late days of Cooper's life and career, when westerns--made now by storytellers who'd shed blood in Europe, the Pacific, and Korea--were grappling with said responsibility. What's more, Coop, the Duke, and other icons of the frontier cinema were aging, and I suspect that by necessity the scripts built around them became parables of old blood and regret. At the opening of Man of the West, Cooper's Link Jones rides in to share the CinemaScope screen with the main titles (this is the only film on offer shot in anything other than Academy ratio, as well as the only one in colour), carrying a satchel of cash to hire a schoolteacher for his small town. When his train is assaulted by bandits, he gives his first hint of a buried past, slapping leather for a six-shooter that isn't there. Link, it turns out, once rode with these outlaws' ringleader, the vile "Uncle" Dock Tobin (Lee J. Cobb). Stranded by the rails with gambler Sam Beasley (Arthur O'Connell) and saloon singer Billie Ellis (Julie London), he stumbles back into the den of the father he abandoned.

Tobin, Dickensian in long black coat and invalid's scarf, has stewed in his own corruption, while Link set killing aside years ago like a dry drunk. "There's a point where you either grow up and become a human being, or you rot, like that bunch," he tells Billie. Reginald Rose's screenplay implies that violence is just an early phase of maturity, and Tobin's henchmen do come off as men-children whose brutality damages everyone they encounter. Beasley is put to work digging graves; Billie is sexually assaulted by Tobin's gang and, discomfitingly, by Mann's camera. When Link finally does devolve to bloodshed, it's in an emasculating, vengeful brawl with Tobin's underling Coaley (Jack Lord). The people facing death here bleed, stagger, bellow, and bleat, and Link's gunfight with a long-lost "cousin" (John Dehner) is a standoff between two gored beasts. Cooper was dead three years later, and Man of the West--thunderously generic title aside--could stand as the film where he reckons with all his past work in the genre. 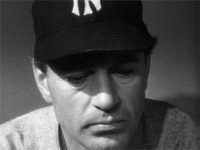 Although The Pride of the Yankees is the movie that has to appear in a "definitive" Cooper collection, it juts out abominably as the only non-western in this set. A foreword by Damon Runyon introduces the ghetto-to-diamond tale of Major League legend Lou Gehrig, and it's easily a tale Runyon might have written. But I doubt Gehrig's real life was as easy, as conflict-free right up to his fatal affliction with amyotrophic lateral sclerosis, as this telling would have it. Sam Wood's template-setting biopic is baseball's own Lives of the Saints, endorsed by the New York Yankees, Gehrig's widow, and probably George Washington and Jesus. Any obstacle Cooper's Gehrig encounters is something to be grinned at or ignored until it yields, and he becomes a baseball hero almost by accident. His romance with future wife Eleanor (Teresa Wright) is a dream ballet to Irving Berlin's "Always" and his triumphs and setbacks are telegraphed through montages of his adoring public. Cooper's performance can't be faulted: he's graceful, athletic, and commands the camera by paying it no mind. Wood's direction emphasizes the vast, lonesome spaces of the ballfield and casts Cooper's terrified face in ever more noirish light as doom closes in. Never once is ALS mentioned by name, however, prefiguring Hollywood's timorous handling of AIDS. Gehrig's great farewell speech receives a thorough revision, too--blame this movie for making most people believe his "luckiest man on the face of the earth" line came at the end of his Yankee Stadium address, when in fact it was his opener. The credits are designed like tombstone markings and the movie that follows is just such an edifice--an airless, Romanesque marker where you stop, contemplate, leave a flower or a stone, and move on. 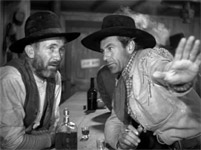 Coming at the end of this quartet, The Westerner feels like the guy who had to throw a bunt to get the three guys before Gehrig up to bat. William Wyler's Texas fable is guilty of its genre's characteristic flaw: embracing a Great Man theory of the West. The fates of two entire communities, open-range cattlemen and homesteading farmers, hinge on the interactions of Cooper's fictional wandering horseman Cole Hardin and Walter Brennan's historical Judge Roy Bean. Maybe it's a dark comedy, since Hardin talks his way out of a dance at the end of Bean's rope by playing on his fanboy worship of stage siren Lilly Langtry, after which the two men go to bed together. Bean is a lonely, dangerous obsessive who befriends Hardin, believing him a kindred soul, by force and coercion. Hardin falls for a farmer's daughter (Doris Davenport), aligning him with the sodbusters who keep fencing the range where Bean's acolytes graze their herds. Heaven bless the days when two actors actually stood in front of a landscape to have a conversation--watching Brennan and Cooper share a hillock overlooking a cattle drive beats a Lord of the Rings greenscreen vista anytime. Yet any hoped-for reconciliation of the two appealing characters (and Hardin is nothing if not a conciliator) would have to take place in a different movie, one with the guts to laugh at its own laughable character dynamics. westerns have to end with a shootout, it seems, so let's be thankful for the cruel/comic grace note this one provides to the loser.

THE DVD
Technically this review refers to "Gary Cooper: The Collection", the Canadian issue of the bundle released stateside as "The Gary Cooper Collection." (Adding to the confusion, Amazon bills it as "The Gary Cooper Star Collection.") I detect no serious difference except in the paired English/French text on the packaging. The box assembles four extant solo DVDs, three of them released in 2008. (Along Came Jones bowed on disc in 2001.) Besides slotting them out of chronological order, "Gary Cooper: The Collection" fails to embrace any kind of thematic unity, or even to act as a diverse grab bag like, say, the 2006 "Signature Collection" box from Warners. I'm pleased with the picture quality of most, although Along Came Jones and The Westerner have the hardest time staying crisp upconverted on my 1080p display. The Man of the West platter deserves some applause for finally giving Mann's oft-cropped 'scope frame its due in 2.35:1, 16x9-enhanced widescreen, and its colours have a humble, dusty vibrancy that don't explode all over the screen. (Unlike, say, my disc of John Wayne's 1966 El Dorado, with the Duke's awful Santa-red Technicolor shirt.) Sound throughout is mono, as you'd expect, but this gives the gunplay and hoofbeats an afternoon-TV familiarity that comforts me.

Beyond a theatrical trailer for Along Came Jones, none of the discs are supplemented save The Pride of the Yankees. For my money, they gave the royal treatment to the wrong flick. Man of the West, praised by Godard as "reinventing the western," needs a home-video re-evaluation, for several reasons.* It's a watershed of sorts; you can see Cooper's casually naturalistic style giving way to the Method madness of actors like Cobb, ten years younger than Coop but still embodying aged decay. Julie London plays a chanteuse and doesn't get to sing--as I see it, that alone demands a featurette-length explanation. And boy, does Royal Dano die hard.

So, The Pride of the Yankees it is. Samuel Goldwyn Jr. talks about his dad's complete ignorance of the Gehrig story in "The Making of The Pride of the Yankees" (8 mins.). Why, the mogul wondered, would anyone go to the movie theatre to see baseball when they could go to a live baseball game? Newsreel footage of Gehrig's farewell speech changed his mind. We discover that this was Walter Brennan's sixth film as a Cooper sidekick and that Babe Ruth shed 47 pounds to portray a younger version of himself. "Lou Gehrig: The Man Behind the Iron Horse" (6 mins.) has Gehrig biographer Ray Robinson on the legend's life. Ted Spencer, chief curator of the National Baseball Hall of Fame, tours us through "What He Left Behind: The Lou Gehrig Collection" (5 mins.). "Always" (6 mins.) natters on about Berlin's 1925 hit song, which I blame for the Spielberg movie. "Lou Gehrig's Disease: The Search for a Cure" (6 mins.) is a brief look at ALS and the campaign to stamp it out, headed up by ALS Association president Gary Leo and baseball couple Curt and Shonda Schilling. Former pitcher Schilling reveals why he admires Gehrig in "Curt Schilling: A Legend on a Legend" (2 mins.). Nowhere in all this do we learn the name of the stunt arm who, in the movie, throws Gehrig's first onscreen hit, tossing a high right-field fly from the lower left corner of the frame at roughly 04:23. Is this the sort of thing you can only spot on DVD?

*Godard agreed with me about the chemical composition of Cooper's head, by the way: "In Man of the West, Gary Cooper's amorphous face belongs to the mineral kingdom ..." (From Godard on Godard.) return