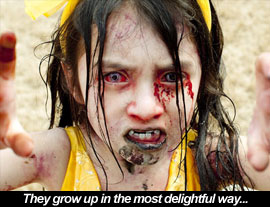 by Walter Chaw Bad by every measurable, objective standard, Ruben Fleischer's Zombieland is a shining, sterling example of what happens when a bunch of idiots get together with their asshole high-concept and proceed to make an abominable hash of it. It's a conversation halfwits have: what would happen if you married the teen romance with the zombie flick? The problem being that Fleischer and writers Rhett Reese and Paul Wernick don't have much of a grasp on what it is about teen romances and zombie flicks that are interesting in the first place. It's the right choice, casting the poor man's Michael Cera, Jesse Eisenberg, in his second "-land" movie of the year (after the fantastic coming-of-age flick Adventureland); it's entirely the wrong choice to have Eisenberg provide film-long voiceover narration that takes the piss--without the benefit of wit or trenchant observation--out of zombie flicks before dropping him in the middle of that old familiar wistful love intrigue. The object of his desire is a fellow survivor of an apocalyptic zombie plague, Wichita (Emma Stone, deee-lish), who is traveling with little sis Little Rock (Abigail Breslin). Ohio (Eisenberg), meanwhile, has hooked up with Woody Harrelson's redneck-with-a-heart-of-gold Tallahassee--yes, if these characters are actually named after the places from which they hail, they have some 'splainin' to do. Our four ragamuffin protags proceed through the long middle of the movie with no zombies in sight, alone with reams of smug, moronic, self-satisfied dialogue that has as the basis of every punchline how much of a virgin pussy is Ohio, and how much of an inbred thug is Tallahassee.

The difference between a piece of shit like this and a genuine classic like Shaun of the Dead is that Edgar Wright's movie is made with love and intelligence, timing and a surplus of wit, while Zombieland is tin-eared, poorly-paced, and betrays not one single insight into its characters or its story arc--there's no love here. If the film performs better at the box-office than Sam Raimi's deliciously-unpleasant Drag Me To Hell or Rob Zombie's soul-sick Halloween II, then the gulf between American and French horror (with Martyrs and Inside leading the way) deserves to widen. Ohio, it seems, has never wallpapered the proverbial walls, spending his time drinking Code Red Mountain Dew and playing "Warcraft" when the end of the world ironically forces him out into the world. But not without his little notebook, wherein he scribbles his little rules about survival on a planet amuck with flesh-eating, running zombies. The first is "cardio," meaning there'll be a "Family Guy"-like vignette featuring a fat kid getting run down (on a football field, no less) by the undead. Proceed from there through things like "double tap" (to be sure that the bad guy's really dead) and "don't be a hero," which, if you're paying attention, he'll betray later on in order to win the hand of the possibly-literal Last Woman on Earth. Another of 2009's wasteland flicks, complete with pyrrhic victories and a rather gauche nihilism clothed in unearned sentiment (see also: 9), Zombieland is also a comedy that's not funny and a zombie movie that's not scary. It's shot and edited so ineptly that it would be impossible to be frightened by it, and written so deliberately that the zombies aren't the only ones moaning and craving brains by the end.

Zombieland is just extraordinarily bad, really, in every facet of its execution. It plays out like levels in a video game and squanders potentially interesting backdrops--like an Indian casino in the middle of nowhere--to stage monkeys-at-play sequences where our heroes take turns putting on silly outfits and overturning gift-shop displays in orgies of smashing and giggling. Later, they go to live in the mansion of Tallahassee's hero (Willie Nelson or Bill Murray as the flat, simple-minded dialogue dictates) for an unsurprising surprise cameo that has the film's only moments of reflective grace. (Asked to give his career regrets, our surprise guest tells one; I wager that after this, he'll have another.) I'm not a fan in particular of George Romero's Dawn of the Dead, but consider the real intelligence behind the scene in the bank where our holed-up survivors "rob" the place but obey the lines delineated by its stanchions against the flat, "duh" moment in Zombieland where the four play Monopoly with real money. Then there's the scene when Ohio almost gets to kiss Wichita but Tallahassee interrupts; the one where Little Rock is taught how to shoot a rifle; the one where a nun drops a piano on a zombie; and the one where a clown crawls underneath the door of a public bathroom stall--one of several instances in which the film ignores its own lore for the sake of a cheap gag. When it's not busy sloppily trying to honour the conventions it's ostensibly trying to lampoon, it flails around drunkenly, looking for some target it can score on and so distract, if only for a moment, its gaffed audience from its complete incompetence. From the picture's blaring, dumb-guy expository soundtrack to its on-screen captioning to its deadening blah blah blah, Zombieland ultimately isn't even that good at its gore--miles away, thirty years on, from the imaginative disembowelments and dismemberments of the peak of Romero's early cycle and its Italian imitators. Too obvious to say: it's a complete waste of flesh. Originally published: October 2, 2009.