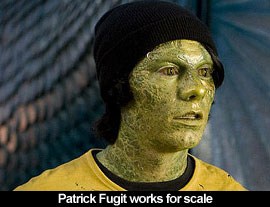 by Ian Pugh Maybe it's a cop-out to dismiss Cirque du Freak: The Vampire's Assistant (hereafter The Vampire's Assistant) with that banal X-meets-Y idiom ("Twilight collides with The Golden Compass!"), but what other choice does one have? Three weeks before little brother Chris continues the Twilight saga, Paul Weitz gets the ball rolling on another vampire property based on another popular series of novels for young adults--and getting the ball rolling is more or less all he does. It's a handy parallel to Chris's own The Golden Compass in the sense that you're expected to immerse yourself in a fantasy world where no one does anything of particular note and nothing is accomplished. People are bitten, people are transformed, and the fulfillment of legends is foretold--but when the credits roll, can you say you've actually seen anything? In its own laborious foundation-laying, Harry Potter and the Sorcerer's Stone still managed a dreaded brush with Voldemort; what does The Vampire's Assistant have to offer? Willem Dafoe and Ken Watanabe under pounds of latex--made up to look like Vincent Price and Incredible Hulk nemesis The Leader, respectively--standing around, making bold pronouncements with the implied message that they'll have more to do if the powers-that-be greenlight the next instalment.

Darren (the offensively bland Chris Massoglia) is obsessed with spiders, while his best friend Steve (Josh Hutcherson, who's been in so many juvie-oriented movies that he will be forever known to me as "that kid") is obsessed with vampires--a combustible combo that lands them in trouble when a traveling sideshow rolls through town. After a misadventure with a poisonous spider puts Steve in the hospital, ringmaster/vampire Crepsley (John C. Reilly, admirably asking to be taken seriously in these ridiculous surroundings) turns Darren into a half-vampire in exchange for saving Steve's life. What's a half-vampire, exactly? A daywalker by any other name--the bloodlust is there, yet not all-consuming, and our hero can engage in all manner of extraordinary tomfoolery as an indistinct CGI blur. In other words, it's a perfect reflection of what kids really want out of this sudden fad of adolescent vampires. Sex and murder are sloppily excised from the equation, leaving behind nocturnal superheroes who harbour dark secrets that are, in turn, rationalized away as unnatural impulses easily suppressed. The whole idea is founded on the reinterpretation of unavoidable tragedies as romantic, cool, adventurous, and...hardly tragic. Not to worry if you have to fake your own death and abandon your family, because a touch of witchcraft will instil your oblivious parents with "the feeling that [you're] still alive." (Shades of Superman II's hypnotic kiss.) What's the point, if it's not how awesome it would be to have--or date someone with--superpowers? Appropriate that The Vampire's Assistant relies on the old childhood cliché of running away to join the circus, because the film weaves for itself a very silly, impractical course of action without an endgame in sight.

It isn't this film's obligation to tie up loose ends, after all: there's a whole "saga" in the offing, and if The Vampire's Assistant leaves you unsatisfied, the sequel should make up for it. Apparently Darren has stumbled onto a centuries-long war between the kindly vampires who incapacitate their human prey and the "Vampaneze," who reject such niceties and simply kill them. Whether those labels have any sort of racial or historical precedent isn't an issue--The Vampire's Assistant is so concerned with establishing a universe that it has no interest in crafting one. And it's not like you won't find a well of potential here, with Darren having accidentally stolen his best friend's fantasy, plunging Steve into the Dark Side to become a handy archvillain. Even incidental characters like Patrick Fugit's Snake Boy have impossible aspirations beyond their stations in life. So maybe there is some heavy shit floating around, but are we really supposed to wait for another movie to come along before we can approach ideas like guilt and regret in earnest? The kicker is that The Vampire's Assistant is not a bad film by any stretch of the imagination: its special effects provide a pleasantly grungy diversion, and Reilly is terrific. (He appears to have a better understanding of morbid humour than anyone behind the camera.) But the film itself takes an hour-and-a-half to admit it has nothing to tell you this go-round, and it bids goodbye with a "stay-tuned" promise of a thousand thrills to come. I seem to recall Sahara straight-up promising more "Dirk Pitt Adventures" when it could barely conjure up an adventure for itself--and the His Dark Materials franchise pretty much arrived D.O.A., didn't it? Better cross your fingers and hope that the vampires carry you over the threshold, boys. Originally published: October 23, 2009.