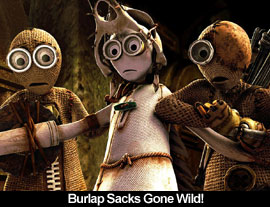 by Walter Chaw There's something missing from Shane Acker's 9, and I'm having a hard time putting my finger on it. I think it's that for as much as I like my nihilism, there's a flavour to this year's variety of Apocalypse that suggests to me the only thing left to win is the Wasteland. There's no moral stake in scrambling for scraps, just this Pyrrhic duty to compete, lust fast-cooling on the proverbial sheets, damp and rumpled as they are from a lot of impotent thrusting. So 9 exists in an Industrial Revolution Steamboy alternate universe, ended when an evil fascist dictator creates, with the help of a scientist (Alan Oppenheimer--weird, non?), a sentient machine capable of building other machines to do its bidding. Imagined as a weapon of peace, no surprise that it turns on Man and apparently kills all living creatures, blots out the sun, and spends its time hunting down little burlap rag dolls animated with the scientist's--wait for it--soul. It's the second Terminator film of the summer, in other words, as well as the second to mention the idea of horcruxes after Harry Potter 6. Accordingly, it's a pretty empty, if visually startling, picture. Based on a celebrated, Oscar-nominated short, 9 hasn't made the transition to feature-length with much of an emotional, or intellectual, payload to justify its extended runtime. The best comparison is to Ralph Bakshi's Lord of the Rings, alas: the seed of something left fallow.

A rag doll come to life upon the death of what we presume to be the last man on Earth, his creator, 9 (voiced by Elijah Wood) is the final member of another Fellowship of Nine that consists of others like him, including 2 (Martin Landau), 5 (John C. Reilly), 6 (Crispin Glover), 7 (Jennifer Connelly), and the dictatorial 1 (Christopher Plummer). He carries with him a doodad that crazy 6 is constantly sketching in charcoal in the manner of crazy people in stylized period, genre pieces--and he accidentally restarts the temporarily shut-down Machine. The Machine then proceeds to try to gather these sentient toys back into itself in what seems to me an interesting desire to marry the intellect with the soul of Man. Heaven with Hell, yeah? It's a seductive, Romanticist construct, but 9 rejects it offhand in favour of a standard quest/chase fantasy in which the dolls (and the film), upon discovering the nature of themselves, interpret the Machine's intentions as destructive and go about trying to "rescue" their "reunited" friends. It's a problem, because what it suggests is an ecclesiastical solution to an essentially human condition: this is a Christian movie upon which the irony of its absolutely empty conclusion appears lost. Images of ascension, rain, and rebirth at its conclusion are entirely contrary and unearned, while the implication that was actually intoxicating in it--that the Scientist may have intended the Machine to recover its "humanity" in the contradiction between creator and created (and that the "passion" of the created causes it to lose sight of its potential as a being in balance)--is lost to all this empty noise. The Machine isn't trying to "win," see, but there's something remarkably empty about this eternity that the golems win for themselves, masters of a dead world.

It's not even a consistent schism that 9 presents, what with its creative dolls, able to fashion their own tools and machineries. The picture isn't thought-through, the problem with that being that it broaches topics deserving of consideration. A feeling of extreme missed opportunity infuses the piece to that end; what poignancy there is to the thing is a consequence of abusing images of everything being destroyed. (It's doubly nihilistic in that sense: a film that goes there, but can only address it through conventional action moments and cozy resolutions.) There's a sequence here, though, featuring a pair of mute twins (3 and 4) who communicate by becoming movie projectors, that is absolutely, delightfully mind-blowing. It's so perfect a statement of modernity, so lovely an evocation of Eliot's Ruins, that it highlights how far the rest of it fails to honour the potency of its imagery. Not just its post-Apocalypse complete with dead mother and child, but also its manqué of Hitler and his scientists in the dictator responsible for the technological ruin. 9 is very much a child of anime in its technophobia and rampaging mechas, in its juxtaposition of cuteness against ravaged industry--but I wonder if it's earned its mass. The picture's so light, so uncertain, so reluctant to go into its dark places and ultimately unwilling to offer a resolution that makes sense. What's left is a Disney solution: kill the irritant and start a family. 9 should've been a whole hell of a lot better than that. Originally published: September 9, 2009.