originally published September 23, 2009
Too long for Twitter, too brief for the capsule page, some quick takes on films screened at this year's TIFF: 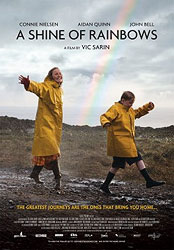 A SHINE OF RAINBOWS (dir. Vic Sarin)
Gawd, this movie is so nauseatingly nice. And generic. And hackneyed--any seasoned moviegoer will be able to predict every single story beat in advance. Connie Nielsen and Aidan Quinn--neither of whom is from Ireland (the director, meanwhile? From India)--play an Irish couple who adopt an adorable stuttering moppet (John Bell) from the local Dickensian orphanage. Because the kid is timid, kind of effeminate, and more than happy to learn the ropes from Nielsen, stoic, grunty Quinn can't relate to him. But then tragedy strikes (as you know it will from the first moment Nielsen tentatively clutches at her chest), and Quinn goes on a bender, and the kid steals a boat, and Quinn's grinch heart grows three sizes when the kid inevitably capsizes. Did I mention the baby seal yet? Who is this movie for? ½*/4

There may still be another capsule at the mothersite, but otherwise this it for my TIFF coverage. Apologies that I wound up reviewing such underwhelming fare; I confess I didn't pursue the buzz very aggressively--a muscle injury, coupled with the unexpected death of a friend, left me at the start of the Festival with little physical or psychic stamina. I'm kinda bummed that in the case of both Werner Herzog movies I showed up at the wrong theatre, but on that I blame a seemingly genetic aversion to doublechecking. Thanks for reading, even if you haven't felt much like commenting!