originally published September 22, 2009
Too long for Twitter, too brief for the capsule page, some quick takes on films screened at this year's TIFF: 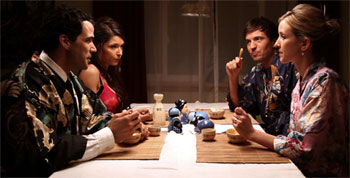 A Gun to the Head (d. Blaine Thurier)
Those who, like me, missed Male Fantasy, the sophomore feature of Blaine Thurier, may find themselves at a loss to distinguish between Thurier's growth as a filmmaker and advancements in digital video since his directorial debut, the better-in-retrospect Low Self Esteem Girl. Thurier's latest, the Vancouver-lensed A Gun to the Head, is comparatively polished, yet the film, with its focus again on suburban drug culture, feels dismayingly unevolved coming from someone who leads a prolific life that includes a steady gig as the keyboardist for the indie-rock supergroup The New Pornographers--even as it cops to a certain anxiety about abandoning comfortable milieux via Trevor (Tygh Runyan), a newlywed struggling with the demands of marriage in the face of his old freedoms. Basically a bush-league Mikey and Nicky, the picture has Trevor ferrying paranoid cousin Darren (Paul Anthony) all over town on a drug run just to avoid the dinner party his wife (Marnie Robinson, the spitting image of Jordana Spiro) is throwing back home; eventually the two run afoul of Darren's suppliers, who have already shown themselves capable of murder. I will say that Thurier is good with actors--this cast really brings it, with the suddenly-vivacious Sarah Lind a particular standout. (Revealing hidden comic chops, she plays a nasal-voiced bimbo who only picked up the word for "um" on her trip to Japan.) Lead baddie Hrothgar Mathews unfortunately bears a sometimes-striking resemblance to Glenn Gould the same year a documentary about the famous pianist plays alongside A Gun to the Head at the TIFF. Which leads me to... (**/4, by the way.)

Genius Within: The Inner Life of Glenn Gould (ds. Peter Raymont & Michèle Hozer)
Going in, I knew nothing of Gould beyond what I gleaned from Thirty Two Short Films About Glenn Gould, and coming out, I mostly lingered on how miscast that film's Colm Feore seems in retrospect. This is a conventional womb-to-tomb doc, chock-a-block with interviews and archival materials and predictably more fun in the earlygoing when its subject is eccentric than near the end when its subject is damaged goods. Over and over, it piques--then sates--curiosity with a reassuring rhythm, but that clunky, arrogant title has a reach exceeding the filmmakers' grasp on the sphinxlike title figure; mileage will of course vary depending on one's degree of Gould-love. **½/4