originally published September 18, 2009
Too long for Twitter, too brief for the capsule page, some quick takes on films screened at this year's TIFF:

A Single Man (d. Tom Ford)
I can't speak for Christopher Isherwood's novel, which seems like it must be a pre-emptive eulogy for the relationship documented in Chris & Don. A Love Story, but the movie made from it is pretty embarrassing. For better or worse (worse, if you ask me), A Single Man is precisely what you'd expect from fashion designer Tom Ford, even if you can't quite picture that sensibility as applied to a movie set in the world of academia circa the early-'60s. (Cue much "Mad Men" envy.) I don't think I've ever seen digital colour-timing so serially abused, or so hammily: Colin Firth is an English professor trying to go about his routine after the recent death of his long-time companion (Matthew Goode, better than he was in Watchmen), whom he can't publicly mourn; every time he sees something 'sublime,' like a pretty little girl in a dress who asks him why he looks sad, the image goes from washed-out pastel shades to near-blinding Technicolor. Lee Pace, Ginnifer Goodwin, and Elisabeth Harnois are squandered inasmuch as one can squander those actors and Julianne Moore is cringe-inducing as a go-go lush hoping against hope that Firth will start to swing both ways, but the pièce-de-resistance is Nicholas Hoult, all grown up but still disconcertingly sporting the same head he had in About a Boy. Hoult's character, a student of Firth's who stalks him like a lost puppy, is ascribed an emotional clairvoyance Hoult himself is utterly incapable of conveying authentically. Indeed, he's matured into such a terrible actor that it's actually disturbing to watch him in scenes with Firth (solid here), as though he's some theatre geek who's cut himself into the film with iMovie. */4 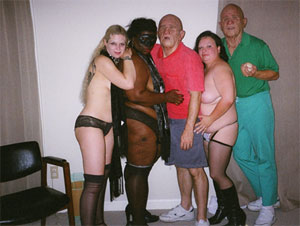 Trash Humpers (d. Harmony Korine)
Harmony Korine dares you to hate this movie...and I accept. Shot (and edited) on VHS in Korine's hometown of Nashville, it's "about" people in old-people masks--including Korine and his asshole wife, Rachel, who spends the last five or ten minutes of the film traumatizing an actual infant--who dry-fuck garbage cans--you didn't think that title was a metaphor, did you?--and find various horrible ways, in vignette after endless vignette, to amuse themselves. An elderly man degraded by a French-maid's outfit recites poetry while one of the titular humpers--who look more like burn victims than like anything else--sets off firecrackers (a Putney Swope/Boogie Nights reference? How cutting-edge). In the next "scene," the poet is dead on a kitchen floor, his throat slit. My problem with Trash Humpers is not that it's stupid, ugly, masturbatory, and tedious, it's that, unlike Gummo, it doesn't transcend all those things to become simultaneously sublime, beautiful, titillating, and rewarding. Whatever you think of Mister Lonely, this is a regression, a tragedy akin to watching an alcoholic relapse. I agree with critic Dennis Lim's theory in the latest CINEMASCOPE that Korine effectively invented YouTube with the man-vs.-chair sequence from Gummo, but YouTube exploitation is a dilettante's game, and so is courting pure shock; Korine is just too old for this shit.* With any luck, he just needed to get this out of his system--like diarrhea. ZERO/4