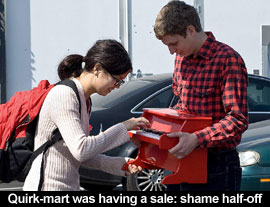 by Ian Pugh The twain where mainstream comedy conventions and a certain vogue-ish indie aesthetic meet, Paper Heart is desperate to be seen as an earnest exploration of love but done in by an almost suffocating desire to please. Any emotion or profundity to be taken from this hybrid documentary is rendered irrelevant by its attempts to increase its entertainment value through cheap laughs. Comic Charlyne Yi (Knocked Up) is touring the nation asking passersby from all walks of life their thoughts on the nature of love when a chance encounter with young gadabout Michael Cera (Michael Cera)--more or less Yi's ideological soul mate--convinces her documentary's director, Nick Jasenovec (played on camera by an affable Jake Johnson), that they've found the perfect opportunity for romantic skeptic Yi to experience love first hand. It's a prefab narrative scenario meant to complement the documentary footage, though it's not exactly a "standard" love story since it casts doubt on whether anyone is actually in love. The problem is that it employs the worn-out tactics of pretty much every lame juvenile laffer from the last four years: bad jokes are told, then let out in the air to die--and everyone stares at each other for longer than is deemed socially acceptable. Because even the documentary aspects aren't enough to stand on their own, each story of true love is recreated by one of Yi's intentionally-amateurish puppet shows/third-grade dioramas, with the major players represented by Popsicle-stick people and every metaphor literalized to the point of ridiculousness.

It's difficult to not see some hostility in these scenes, which basically paint their subjects as naïve hicks who stumbled onto their philosophical/romantic epiphanies by dumb happenstance. (With that in mind, it can't be a coincidence that the biggest laugh at both screenings I attended featured a preteen girl confessing her love for Chris Brown--a bit that was ostensibly filmed before his domestic abuse charge but left in the final cut for that reason.) This isn't to say that Paper Heart is pessimistic or actively mocking its interviewees for their sometimes-misguided sense of ardour, just that the entire film, in narrative as well as documentary form, is defined by one default setting--Awkwardness with a capital A, in case you've already forgotten--from which it absolutely refuses to budge for anything. To be fair, the film isn't necessarily wrong to present romance in that discomfited light, and it manages to throw a few good punches for the trouble (attacking love as a commodity, for example, and the concept of Paris as an automatically romantic backdrop), but when you greet every permutation of human interaction with the same dry half-sarcasm, can you really say you're out to learn something? Yi's nervous laughter, Cera's stumbling delivery, and the twee drollness of it all collide to form something shapeless, wayward, and altogether worthless.

Still, while Paper Heart never justifies its narrative beyond the perceived necessity for something more directly cinematic, at least it manages to draw interesting contrasts between emotional endeavours to understand love and their intellectual counterparts. In the throes of her own passion/confusion, Yi pens a song entitled "You Smell Like Christmas," which then accompanies a sickly-sweet montage of home movies chronicling her antics with Cera. Meanwhile, it seems that Johnson's Jasenovec and his faux-documentary have no thematic aspirations beyond harassing the budding romance and manipulating it to capture Kodak moments. Yet no ideas are ever strong enough for Yi and (the real) Jasenovec to stick with them before falling back into their predictable routine. The question of whether art itself is sufficient/relevant/appropriate in its attempt to chronicle human emotion is casually deflected by another homemade art project that wraps everything up with a self-consciously Hollywood ending. Of course, it could be argued that this is the final argument, that art can only accomplish so much--but even then, the fact that another puppet show has brought us "full circle" from the narrative back to the documentary only emphasizes that this particular work of art didn't arrive with a clear thesis. Love's complexities are not so easily encapsulated, though most artists pose the questions on their own terms; after all the bizarre silences and cutesy vignettes, you're not entirely sure if Paper Heart had a point to make as strong as its desire to make one. Whatever topics this film had proposed to tackle, they simply weren't established eloquently enough to warrant much exploration beyond the same stale platitudes (love hurts, but love anyway!) buffered by the same stale jokes. Originally published: August 7, 2009.