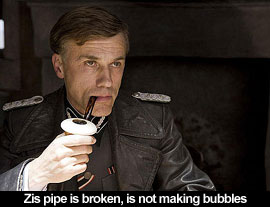 The sense that there are indelible scars from any conflagration on either side is literalized in redneck Lt. Aldo Raine (Brad Pitt, honouring his namesake Aldo Ray's snarling performance in The Green Berets) and his practice of carving swastikas, Charlie Manson-like, into the Nazis he frees to tell the tale of his titular band of guerrilla commandos. (There's a fascinating moment--a throwaway line, really--where they're self-identified as terrorists, something quantified in their suicide-bombing plan.) It comes complete with a feeling that no one gets out of war completely alive, that the deals we made with the devil at the end of WWII are no better or worse than the ones we strike with our devils on a daily basis. Tarantino makes time, too, to discuss the importance of film in the cinema-savvy flirtation between moviehouse proprietor Shosanna and dashing German war hero Fredrick Zoller (Daniel Brühl)--how film is the definitive historical archive of the twentieth century, where poetry and correspondence served that purpose in The Great War. (Indeed, there's not much difference in the medias when the movie looks and acts like this one.) The self-awareness of this picture arrives in the form of Tarantino's coded reflection, at length, about how film, because of its privileged position in our culture, provides the most eloquent expression of a society's attitudes, its past, and most especially its present. Destined to be misunderstood as Tarantino's WWII movie, Inglourious Basterds is his movie about war as seen from a Trench-rat's "Neverendian" perspective. The idea popular along the Western front circa 1917 that the carnage people are capable of inflicting on one another is limitless and unbounded proves true in 2009 as we continue to find ourselves--as Americans, as Israelis, as Africans, as Arabs--entrenched in untenable situations in wars of attrition.

Alive with curiosity and the moral streak evident in Tarantino's work since Jackie Brown (sanctified in his ferociously moral Kill Bill pictures), Inglourious Basterds presents, in vignette after vignette, complex, thorny tête-à-têtes punctuated by explosions of unusually cathartic violence. Tarantino promises a Dirty Dozen-variety of atrocity only to disappoint repeatedly with ruminations on the nature of identity. The heroes and villains of Inglourious Basterds are flipped constantly throughout the piece; Shosanna's victory is pyrrhic at best (ditto Landa's, and Raine's); and unlike any number of modern, feted wartime melodramas (particularly Spielberg's WWII trilogy of Empire of the Sun, Schindler's List, and Saving Private Ryan), there is no epilogue where righteous lines are redrawn once the fog of war has lifted. There's no post-mortem to the events of this picture, just the film's most intimate and graphic moment of bloodletting, perpetrated against the character we hate the most--and yet it makes us cringe. Pointless to talk overmuch about how terrible Eli Roth is in the film--better to consider that his casting serves as tart commentary on the stark divide between Tarantino's genre morality plays and, really, anyone else's. It's a film that demands active viewership, inspires conversations, and forms a beautiful diptych with Neill Blomkamp's District 9 that's interested in the essential inescapable reality of what happens when people consecrate their intolerance in nationalism. Inglourious Basterds is a war film about war. That's rarer than you think. Originally published: August 21, 2009.