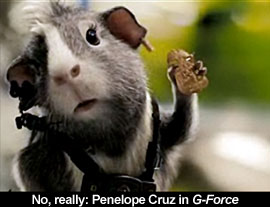 by Ian Pugh It's no small wonder, I suppose, that Disney's 3-D contraption G-Force isn't nearly as bad as it could--and by all rights should--be. Certainly, there are people at the Mouse House still convinced that an overload of genre clichés (here the conventions of the spy movie) are made instantly clever when applied to talking, farting animals (here guinea pigs), and that the company's morality factory hasn't already exhausted the virtues of makeshift families and believing in yourself. But encoded in the formula this time around is an odd, unspoken thesis about facing the hitherto-ignored consequences of cruelty towards those who can't defend themselves. Most intriguing to that end, the big-name actors roped into lending their voices to this mess are appropriately cast, their live-action personae transferred to a sticky CGI concoction of animal nature and human spite. Steve Buscemi cuts loose as an insane, sadistic hamster (his paranoid tendencies--he jealously guards his territory while mumbling to himself--born of "the psych ward at UCLA"), for instance, while Nicolas Cage, as an orphaned, star-nosed mole named "Speckles," improbably gives his best performance in years. Utilizing his weirdo inflections from Peggy Sue Got Married, Cage manages to channel his familiar space-case into an unlikely outlet and pump it with quiet desperation--dare I say pathos--without even the smallest hint of the self-parody that's plagued him of late. More than what the film deserves? Most definitely, although the high points of G-Force suggest that, at some stage of production, in some alternate universe, it may have actually deserved it.

Speckles is the intelligence man for the newly-dubbed "G-Force," a trio of guinea pigs--Darwin (Sam Rockwell), Juarez (Cage's Captain Corelli's Mandolin co-star Penélope Cruz), and Blaster (Tracy Morgan)--trained by FBI schlub Ben (Zach Galifianakis, whose CV full of crazy bastards casts doubt on how "real" any of this supposed to be) for complicated recon work. When an unauthorized mission to spy on household appliance magnate Leonard Saber (Bill Nighy) goes pear-shaped, the head office cuts their funding, turning the agents into fugitives. A brief interlude through the life of a normal pet rodent follows, with teenagers and young girls treating their respective animals like rag dolls. Perhaps that's Toy Story's deathless influence, but once a robotic microwave oven throws one of our furry protagonists into its belly, attempting to figure out how long to cook him, it seems a disturbingly logical conclusion to an all-too-recognizable cycle of abuse. (By basing this scenario on infamous real-life cruelty to animals, the film makes a chilling threat to explode a guinea pig in 3-D.)

Of course, these critters have the capacity to fight back, and I don't think it's spoiling anything to reveal that the villain pulling the strings comes from within the ranks of G-Force itself. That character's father gives him a stern piece of advice in a flashback that sees human exterminators laying waste to their home: "Son, if you ever get the chance to bring mankind to its knees: do it." Hilarious, unexpected, terrifying--not since the unsettling Open Season has there been an animated kids' film this frank about the repercussions of placing its anthropomorphic animals, both wild and domesticated, in direct conflict with humanity. From a strictly Disney perspective, these scenes are what Beverly Hills Chihuahua would have been had it cared a whit about a premise inherently fraught with danger and brought to life by the question that nags in G-Force: are we to interpret these animals' evolution into sentience as the first step in a violent revolution? It very nearly turns this whole concept of talking-gerbil entertainment on its ear.

Unfortunately, G-Force is also the most recent victim of the mentality that kids are imperceptive morons who have to be pacified by 3-D, the most transparent cinematic gimmick there is. The film itself is artificially letterboxed so that the special effects occasionally spill out of the frame, the better to convince you that shit is comin' at ya. These effects are thrown out so often, at such high speeds, that I started instinctively turning my head away, simply because the visual assault became too much to handle. (The car chase that kicks off the third act, hyperactive and incompetently executed to begin with, is rendered unbearable by a literal fireworks show with no discernible purpose but to distract you.) You could reasonably call it an attempt to provide the under-five crowd a Transformers 2 of their very own--right down to the household appliances that spontaneously become pinchy/grabby killing machines--and, as such, many narrative problems can be traced back to Hurley (Jon Favreau), the obligatory "common man" who heralds his entrance (and practically every other scene he's in) with a loud fart before coming out of the blue to prove his courageousness. As G-Force almost merits a recommendation on the basis of its appropriate/inappropriate subtext and Cage's subtle subscription to same, it's only too bad you'll want to shut your eyes and plug your ears for most of it. Originally published: July 24, 2009.