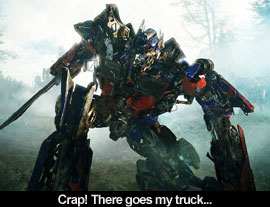 Neither is it bad because of an appalling racism that sees white actor Tom Kenny doing the voices of Mudflap and Skids, Amos & (gold-toothed) Andy robots who declare themselves to be illiterate after a film-long minstrel show. No, Transformers 2 is bad because it represents every single vile, puny thing that's wrong with the United States. It's ignorant, boorish, loud, and proud of it. It takes a moment to imply that Obama is a pussy for appointing some suit to run super-secret, massively-destructive human/Autobot strikeforce NEST, then expels said suit out the back of a cargo plane carrying a bunch of grunts who need to be told that a desert full of Egyptians are "friendlies." Unless we've been at war with Egypt, of course they're fucking friendlies--exactly whom is Bay educating? He's educating the audience assembled to watch Transformers 2, naturally, because said audience is packed to bursting with idiots on the one hand and people hoping against hope to recapture something of their lost youth on the other. The problem with Bay is that he hates you. He thinks you're a moron and then you go about proving him right by making his movies obscenely popular. He also hates the Transformers as a cultural relic, having them fart and piss and shit and, in a fairly embarrassing moment in an embarrassing film, sport a pair of giant testicles. Of minor interest is the fact that Bumblebee, unable to speak but in borrowed sound bites, favours Tom Hanks's heroic astronaut Jim Lovell and retarded Republican shrimp farmer Forrest Gump. It's proof positive that Bay is a smart guy, smart enough to understand that Hanks is the voice of the American everyman--meaning Bay isn't dangerous accidentally.

As if it matters, Sam is going to college when giant robots start fighting each other and his hot girlfriend dry-humps a motorcycle and runs in a halter top and slow-motion. Is it pointless? It's at least pointless. It's also cacophonous and bloated with testosterone, a loud picture of Michael Bay's tiny bicep inflated with ILM and THX sound, speckled with what he thinks is funny, like two little gay dogs fucking each other (and a tiny robot leg-humping Megan Fox), for instance, or those old standards of elder/bimbo/Stepin Fetchit humour. Transformers 2 is a dossier on Bay's shortcomings as a human being and, sadly, by extension it's a snapshot of how we scramble to indulge the worst things in our nature in the dark, in the company of others destined to be either victim or victimizer in their own sad dramas. It's a primer on how we learn to make war by falling in love with the weapons of war without assimilating the real message of Bay's films that all that firepower is the vehicle of male sexual frustration, insecurity, and inadequacy. This is without stopping to consider Bay's trademark collateral toll: hundreds in Shanghai; thousands as all hands go down with an American aircraft carrier; dozens and their camels in the Egyptian village; and the dignity of everyone involved. Running at around 140 minutes (with a good forty of those taken up by lacklustre flying-the-nest drama featuring Sam's parents), it's as much a dusty monument to the self as the pyramid Transformers 2 destroys at its conclusion--a futile grab at immortality, a collection of screamed performances and shooting at stuff that isn't damaged by shooting, and destined to be a gaudy testimonial to our humiliating, cyclical indulgence of bellicose policies and antiquated social attitudes. It's all so last administration. Originally published: June 24, 2009.