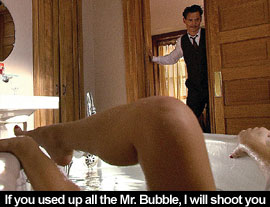 There's the romantic angle with hatcheck girl Billie (the exquisite Marion Cotillard), who looks great in a "three-dollar" red dress and even better in a bathtub. It's an angle bruised a little by the revelation that Johnny was gunned down on the arms of two prostitutes, but Public Enemies is less about the underbelly than it is about the idea that Dillinger's last words were not only heard, but also transmitted back to jailbird Billie as a romantic movie's most romantic fabrication. That being said: in Mann's signature fashion, the only relationship that matters in Public Enemies, the only one that generates any sexual tension, is the one between hunter and hunted, i.e., the one between G-Man Melvin Purvis (Christian Bale) and Dillinger. The problem this time around is that Bale's smouldering, understated gravitas has nothing on Depp's ridiculous charisma. He's a bad dance partner. The film has a coded energy when Depp's centre-stage and feels resigned and flat when it's Bale's turn. Even sequences with a seething J. Edgar Hoover (Billy Crudup), advocating torture and illegal surveillance (topical!), lack the kind of urgency such scenes might have carried this time last year. Typically, the men of Mann's films are tortured, untamed, pulled towards the promise of security that a woman offers them but undone finally by the call to (often criminal, always fatal) Work, and Public Enemies' Dillinger and Purvis are no different: both are tugged along by their natures, both are shaded in to suggest they're equally weary of the chase and not as different as history might paint them. Alas, John Woo's The Killer did it better--certainly with more immediacy, notably with more evenly-matched combatants--twenty years ago. It's hard to see these two figures as complementary (Dillinger/Purvis are no Will Graham/Hannibal Lecter, Hawkeye/Magua, Hanna/McCauley, Vincent/Max), and Public Enemies, more than most any other Michael Mann picture, feels devoid of, er, heat, because of it.

In any case, there hasn't been a well-developed woman in a Mann film since Joan Allen's poor little blind girl in Manhunter, and true to form, Billie is made the cipher who begs her fella not to pursue the course that will lead to his ruin--although we know it's that aura of insuperable testosterone that's drawn him to her in the first place. It's a shame, because Cotillard seems capable of a great many things more complex than mourning her man in prison greys. The potential of a Mann-directed film with a testosterone-fired female is there in the flash of defiance in Cotillard's eye as Billie rallies from a brutal interrogation sequence. (More's the film's failure of perspective, then, when she needs a white knight in Purvis to deliver her from her torment.) There really aren't enough like moments in Public Enemies--the only other might be an extended shootout that ends with the assassination of Baby Face Nelson (Stephen Graham), and it doesn't go unnoticed that neither sequence features Bale's Purvis prominently. Technically, the picture's a marvel, its thundering gunfire providing visceral counterpoint to Mann's usual tonal control. Indeed, there's a lot to love about Public Enemies, just not much to chew over once it's finished and, unlike other Manns (Heat, or, hell, Ali), there's no one set-piece that justifies the rest of the time it spends admiring itself like the proverbial weightlifter in a gym's mirror. It's handsome, but, unlike most of Mann's other work, it doesn't mean a thing to me. Originally published: July 1, 2009.