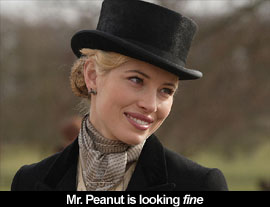 by Walter Chaw At first glance, it would seem that Stephan Elliott's pictures follow no conventional line. Start with 1993's Frauds, starring Hugo Weaving and (yes, that) Phil Collins, then proceed to Elliott's landmark The Adventures of Priscilla, Queen of the Desert. Then it's on to that film's tonal antidote (think an Outback Woman in the Dunes with Rogers & Hammerstein interludes), Welcome to Woop Woop; a Hollywood sojourn (the criminally-underestimated serial killer/FBI procedural Eye of the Beholder); and finally, one near-fatal ski accident later, an oddly appropriate return to form in the Noël Coward adaptation Easy Virtue. These movies are almost Billy Wilder-ian in their variety--literally, in that Elliott seems above all keenly attuned to the comic opportunity--the Lubitsch, if you will--in relational dynamics, but also in that he begins with something like a thriller, goes to camp, goes to camp thriller, returns to thriller, and now does something almost entirely genre-peculiar. It's a vertiginous enough trajectory that for the first half-hour of Easy Virtue, I'd forgotten I was watching a Stephan Elliott film--that the fact that Elliott directed it was indeed the only reason I was interested in seeing Jessica Biel spar with Kristin Scott Thomas on a sprawling English estate in the 1920s.

And then it hits you. It hits you that, like Wilder again, the one thing that draws through Elliott's work is a protagonist who's an irritant to the larger society to which he wishes, ardently, to join and from which he, at the end, turns away upon gaining insight into the terrible price of admittance. Over the course of his five films, Elliott can count only Priscilla as completely untouched by a studio's interference, but he's managed despite this to produce a small collection of pictures that speaks directly to something so intimate as his creative frustration. Stretch, and it's even possible to see Elliott's pictures as a progressive "coming out" story located in the dark heart of a tortured suburbanite in Frauds, the courage to be outside in Priscilla, the smiling madness of the herd in Woop Woop (tied, and brilliantly, to the bleak subtext of R&H at their pinnacle), the purity of the heart no matter its thorns in Eye, and the clean exhilaration of what feels like absolute freedom in Easy Virtue.

There's great irony that Elliott finds escape through the meticulous meter of this genre and Coward's reputation; if we're correct that Elliott is an auteur of the Wilder outsider, then what better way to address that than through the most airless, closeted genre there is? And what better way than to employ in this pursuit music by congenital artist Cole Porter? Through that prism, consider the casting of Biel as young Yankee racecar driver Larita, freshly married to John (Ben Barnes)--the couple on their way to John's family home in the British countryside. Mother (Thomas) is a closed-off, angry sort while Mr. Whittaker (Colin Firth) has the ease of someone who has returned from a war never to again feel comfortable in polite society. The first thirty minutes of Easy Virtue are impossible to nail. They're slippery--you can almost feel Elliott getting his legs back after a long time on the bench. It opens like a fantasy of the stage (like Olivier's Henry V or, the more obvious touchstone, Baz Luhrmann's Moulin Rouge!) and continues to a moment when John sings a Coward song to Larita as if to announce that Easy Virtue is going to be a musical. But it's not those things--and it is those things. There's a delirious dance sequence done in one long, serpentine take sharing time with obvious artifice, slapstick, a scatological Can-Can, subversive Upstairs/Downstairs humour, and a fox hunt from the back of an absolutely beautiful vintage motorcycle. Easy Virtue is a chimera, a mishmash of past and present, expectation and surprise, and in that way the best possible way to honour Coward's and Porter's fuck-you irreverence. They would have cast Biel as the lead in their product, too.

Easy Virtue makes absolute sense as Elliott's summary and perhaps swan song: it's the only film he could have made coming back from a devastating accident in that it torpedoes expectation at every turn, tosses the finger at the stuffiness embedded in the genre, and says in every extravagant, clever moment of its insouciant artfulness that Elliott's going to do exactly what he wants to do and will continue to do so no matter the cost to his career. Through Elliott, Biel, resplendent in a platinum wave, discovers her inner vamp; she's at ease equally playing sexpot, jilted lover, wronged Other, and screwball dame. The ending of the picture--the smashing of a statue that, once upon a time, was equated with the ideal Larita represents--is an eloquent summary of Biel's film-long shedding of her persona. It feels more like an Oscar Wilde play, another extreme outsider grounded in certain gutters but looking, to butcher Wilde's phrase, at the stars. Thomas is predictably frigid, but Firth surprises with his post-Great War malaise. He's sapped of any kind of impetus, enough so that his call to action by the end feels all the more affecting. And that ending, with its many ambiguities and cross-purposes, is the final declaration of independence from convention: the picture has honoured its source material without being bound by it. It would be a shame if Easy Virtue were Elliott's last movie, but it's a logical end point to this period of becoming. It's only a surprise if you haven't seen his other films. Originally published: June 17, 2009.