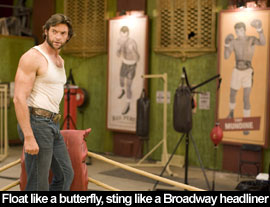 by Walter Chaw The action sequences are bad, the plot is bad... Hugh Jackman? He's fine. Everything you might expect, in other words, from X-Men Origins: Wolverine, wherein that most popular of muties (although I always preferred Gambit, marking me as about 42% gay) receives his first official vehicle with shaky Gavin Hood at the wheel. Was it the deadening piece of shit Tsotsi or the gravid piece of shit Rendition that convinced them Hood was the right person for this gravid, deadening piece of shit? True to form, the movie is laden with misplaced gravitas, magic-hour tableaux, and awkward drivel that makes me think that of the film's two credited writers, it's Hitman/Swordfish scribe Skip Woods and not 25th Hour scribe David Benioff who took the final run at the screenplay. ("Now I know why the moon is lonely," says our macho man of action Wolvie (Jackman) at one point--and the audience howls.) It has a Watchmen opening montage following Wolvie and brother Sabretooth (Liev Schreiber) through history's most picturesque battles (Trenches! Beaches! Paddies!) before they're finally enlisted by mysterious government stooge Stryker (Danny Huston), who has a plan for these and other genetic misfits. Think of it as "X-Men: Episode One", as dorks are encouraged to trainspot famous mutants in the background while the foreground gets cluttered with lots of bad dialogue, grammar-school sentimentality, and oodles of special effects.

Wolverine/Logan is immortal, it seems--indestructible, too. And a misspent youth has told me where the filmmakers don't bother that he has a mutant healing ability, which has also granted him a preternaturally long lifespan. He sprouts bone claws in-between his knuckles when you make him mad that are replaced midway through the picture by metal claws (the indestructible Adamantium!)--as is his skeleton, thus rendering him super-duper indestructible. That's important, because someone has killed his girlfriend, Kayla (Lynn Collins), and that someone is probably his also-mutant brother Victor/Sabretooth, meaning there's going to be a lot of Pirates of the Caribbean 3-style fighting in which there are no stakes because no one can die. No matter, as Wolvie breaks into Stryker's lab after discovering that Stryker is actually an anti-mutie bigot and frees a bunch of little mutant kids promptly adopted by a beatific Professor X (Patrick Stewart), providing a segue into Bryan Singer's X-Men though not explaining why no one at Professor X's school in that film seems to recognize their savior from this one. Just like how Darth Vader doesn't recognize his childhood best buddy C-3PO! The first bit of unsolicited advice I'd offer to future "Origins" franchise entries is that if you're going to emulate something, don't emulate something that sucked so conspicuously.

Wolvie's wanderings in the world before the Final Showdown with super-baddie Weapon XI (Scott Adkins) include a nurturing interlude with grandparent-manqués and an interminable stint as a lumberjack in the Canadian Rockies that ends badly for the mystical Native American girlfriend who gives him his stupid name. The fantasy of the loner with a secret is played to the hilt, with no greater thought in the picture's head than to offer opportunities for our hero to be underestimated and unsheathe those Freddy Kruegers. Gambit (Taylor Kitsch) has a nonsensical extended cameo meant to make people like me squeal like a schoolgirl (ditto The Blob (Kevin Durand), Deadpool (Ryan Reynolds), and Cyclops (Tim Pocock))--and once the rubble has cleared, there are forced explanations in here for everything from Wolvie's amnesia to the minting of his dog tags to the acquisition of his sweet motorcycle. There's no question that it's terrible, no question that Jackman and Schreiber are able to do more with this horrendous material than they have any right to (though it doesn't really help), and no question that when all's said and done, I wish I'd just watched the bootleg online with fast-forward and mute a mouse-click away. Originally published: May 1, 2009.