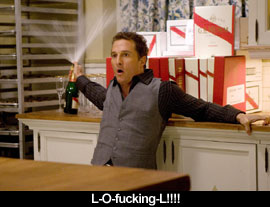 by Walter Chaw Watching Ghosts of Girlfriends Past, a musty relic of Eisner's reign at Disney that first dreamed Ben Affleck as its star and a decade later settled on Matthew McConaughey (opposite, in some weird nepotistic recompense, Mrs. Affleck, Jennifer Garner), is excellent justification for the crib death of cynical, Eisner-hijacked, RKO-minted philosophies like Commerce over Genius. It's a retelling, I'm embarrassed to need to articulate, of Dickens's A Christmas Carol that substitutes Scrooge with serial womanizer Connor Mead (McConaughey) and Marley with old philanderer Uncle Wayne (Michael Douglas, doing a broad lounge-lizard caricature the spitting image of a mummified hybrid of Robert Evans and Howard Hefner). On the eve of brother Paul's (Breckin Meyer) marriage to shrill harridan Sandra (Lacey Chabert), Connor is visited by Wayne and the Ghosts of Girlfriends Past/Present/Future to show him that true love exists in the world beyond one-night-stands with supermodels--that it in fact exists between oily Connor and first love Jenny (Garner). What this means for the audience gaping in slack-jawed awe at this thing is a good thirty minutes of unearned sentiment tacked onto the end of a noxious payload of open misogyny, fag jokes, and gags that fall square on their face. Very simply, it's the most appalling, hateful, reptilian, inept film I've seen since Love Actually, and I wish I could say that I'm surprised that it was directed by Mark Waters and written by the braintrust behind Four Christmases.

The women in Ghosts of Girlfriends Past are either hysterical sluts or (self-described) hysterical bitches, with the exception of our heroine, Jenny, who is hopelessly in love with one of the most unpleasant, sociopathic characters ever to grace the silver screen, making her a moron. In any event, none are immune to Connor's charms, which seem to begin and end with his tan and propensity for bookending sentences with McConaughey's trademark, probable-proof-of-mental-decline, slow-leaking "yeah"--which renders the film a male fantasy of objectification where even the strong, smart, independent one (she's a doctor, see?) is completely dick-whipped by our unctuous fashion photog. They spar for long, uncomfortable passages, meaning they're totally in love, and then Connor lets slip that one of the interchangeable whore bridesmaids (all of whom really want to fuck Connor--there's a contest, though two of the three have already been hoisted on Connor's petard) has previously fucked groom Paul as he introduces himself to the mother of the bride (Anne Archer, collagen turning her into Jennifer Coolidge) by feeling her tits at the wet bar. This leads to the romcom third-act plot point as Sandra calls the whole thing off, giving freshly-reformed Connor the opportunity to make the Big Romantic Gesture on his milquetoast brother's behalf just in time to convince "smart one" Jenny that despite Connor's genuinely creepy behaviour, it's time to throw those gamine legs up in the air again in carnal salute to his graduation into sensitive bridegroom material.

Here's the problem--one of them, at least: the picture never once refutes the lessons that it teaches for its bulk. Women are whores and bitches and, worse, they're stupid whores and bitches; and if you want to fuck them, you treat them like dirt and then dump them en masse via video conference call. The film isn't about making amends, it's about Connor earning absolution enough to propel this piece of shit to a "happy ending" that, no kidding, has as its pre-credits stinger a scene where Michael Douglas's dinosaur playboy hits on a sixteen-year-old girl. Wasn't Marley tortured and chained for his sins? Because it's a Mark Waters film, there's some hate levied at Asian guys, homosexuals, and high-school politics--and, again because it's a Waters film, there's a lot of loathsome stuff going on in here that you suspect he had no awareness of because it'd never crossed his mind to attempt any insight into anyone other than himself. His limitation as an artist isn't his complete solipsism--total introspection is arguably a requirement of art--but that his introspection reveals a giant, dumb sketch of a half-formed intellect engaging in every ugly thought of which privileged white guys are accused.

There appears no recognition that the centre of the film is irredeemable, particularly as played by McConaughey--just as there appears no recognition that when the bride bemoans the lack of figs in her rehearsal-dinner salad, it's funny because it reduces her to a screeching Bridezilla stereotype and not because we sympathize with her in any way. Connor's Shadow of a Doubt Uncle Charlie monologues on the ugliness masked by domesticity are played light instead of with the real danger that could have made this movie interesting, while Rolfe Kent's broad, insulting score demonstrates in no uncertain terms that Ghosts of Girlfriends Past is fun! It's not fun. It's the distaff Love Potion #9: an instant cultural curiosity that people can point to when talking about what happens when a bunch of assclowns who don't know what they're doing get together to make a movie that can't disguise the hate and misunderstanding they harbour for their target demographic. It's an invitation to hate that ends with an appeal to love. I wonder what it says about us that this is one of Hollywood's reliably bankable formulas. Originally published: May 1, 2009.