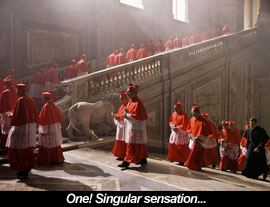 by Ian Pugh The preferiti are the cardinals most likely to be elected Pope following the death of the previous one. So I learned from Ron Howard's Angels & Demons--twice. It's a point that is adequately explained in a news report serving as the film's prologue, then superfluously explained in one of hero-cum-tour guide Robert Langdon's information-dense lines of dialogue. From there, it appears as if Angels & Demons will take a willing leap off the same cliff The Da Vinci Code did, annotating each excruciating historical detail for no other reason than to play WIKIPEDIA while spelling everything out in the most condescending way possible. Yet a strange thing happens around the movie's halfway mark: everyone stops defining and redefining the arcana--indeed, exposition practically ceases altogether as the characters are dragged between libraries and churches, spirited from one set-piece to the next, arriving just in the nick of time to face off against the killers or help save some poor bastard from getting burned alive. The shift in tone is sudden and dramatic--you could probably draw a fat line through the middle of Angels & Demons to delineate where the hand-holding lectures end and the linear procession of action sequences begins. How did that happen? As Opie will always be his unsubtle middlebrow self and co-screenwriter Akiva Goldsman will always be the guy who wrote Batman & Robin, I have no choice but to assume that the responsibility for this schism lies with the man whose name appears for the first time on this franchise: David Koepp.

The presence of Koepp--no stranger to self-awareness, he (see: his scripts for Spider-Man, Indy 4, and the supremely ridiculous Secret Window)--can be taken as tacit admission that these properties were never anything more than quasi-spiritual junk food--certainly nothing that will provoke serious discussion about the profound impact of organized religion. This viewpoint is bolstered by the fact that The Da Vinci Code's rambling, tinfoil-hat insanity has been replaced by a premise that lends itself to a more recognizable, down-home form of insanity. Taking a page out of the Luthor/Blofeld playbook, the Illuminati have stolen a canister of antimatter (!) and planted it somewhere in the Vatican, where the Catholic world has gathered to mourn the death of the Pope. Alas, the creeps have also kidnapped all four of the cardinals who form the preferiti, and they promise to kill one every hour, on the hour, until the antimatter detonates in a city-vaporizing explosion at midnight. Flown in from Harvard in all his symbologistic glory to assist in deciphering clues, Langdon (Tom Hanks) eventually leads the Swiss Guard on a mad dash to locate the bomb and/or the cardinals before they die and/or there's a big explosion. A bit of patently ridiculous "24"-style action--complete with the requisite dead-pope conspiracies and clandestine double-crosses--ensues, but that it should resort to such tactics in the first place I must confess threw me for a loop.

I'm torn between thanking David Koepp for making this material semi-watchable and lamenting that he nonetheless proved incapable of transcending the problems inherent in the material itself: it must appear to have something to say even when it clearly doesn't. In case the idea of the Vatican being obliterated by science itself! didn't tip you off, the topic at hand is the question of faith's relevance against the eternal march of scientific progress--something of which Angels & Demons continually reminds you without adding any depth to the conversation, first in a feather-light look at the stem-cell controversy (only bothering to acknowledge that there is a controversy) and again in several impassioned (and repetitive) pleas by the former pope's camerlengo (Ewan McGregor) that the Church has an obligation to be more forthright with its followers. Okay... Then what? The brief sugar rushes provided by its own silliness are accompanied by as many stretches of boredom and obviousness (just as they were in the original film), and the picture sputters whenever it hesitates long enough that you become conscious of its attempts to convince you that its most ridiculous moments are built on profundity.

My fascination with the film lies strictly in the fact of its existence when placed against The Da Vinci Code; truth be told that its crazed-thriller element grows stale pretty quickly despite its relative novelty. Even if (especially if) you were surprised by the identity of the dude pulling the strings at the end of The Da Vinci Code, you shouldn't be surprised by where the hierarchy of responsibility leads in this particular conspiracy. Of course, its final twist does end up containing a semi-intentional nugget of interest about how an impossibly convoluted series of events can lead us to worship the wrong people for the wrong reasons (which is what the first film grasped at before declaring Amélie to be the last scion of Christ), though it once more fails to come to any conclusions about how these institutions actually affect the people they touch. (It's an unforgivable poison at one moment, well-meaning but misguided at another.) Easy to say that Angels & Demons merely wants to illustrate the dichotomy of religion--easier and more accurate to say that it's too cowardly to take a stance that has the potential to offend anyone. Originally published: May 15, 2009.