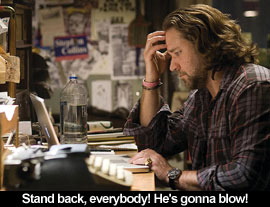 by Ian Pugh If it were smart, Kevin Macdonald's State of Play would stick to lamenting the ignominious death of newsprint at the hands of Internet sensationalism and all that that implies. As a veteran reporter and a U.S. Congressman--college roommates once known as rabblerousing muckrakers in their respective fields--turn to each other when their worlds collapse, you'd think that maybe the film had in mind a meditation on the dissolution of the Old Boys' clubs. Done in by our demystifying familiarity with the subjects under scrutiny (cops and politicians) and an unwillingness to inject new blood into their veins, right? Hell, even Watergate is brought up as an incidental location, as Macdonald sends a sweeping camera across the notorious hotel. You can't tell me there isn't something to be said here about how a reliance on outmoded tactics and an obsession with decades-old victories has only sped up their obsolescence.

Alas, State of Play is a paranoid '70s throwback played fatally straight. Orchestrated as the last hurrah of a dying medium, it leaves us with the vague hope that its uncouth descendants will take a few notes from its successes and failures. A reasonable enough perspective, but the film is completely without awareness of the idea that perhaps everything it has to say has already been said--more eloquently, decades earlier, and in a much more relevant environment. While I concede that there's a certain timelessness and universality to the labyrinthine machinations of government conspiracies (or, at least, to cinematic ones), State of Play simultaneously reveals too much and too little, treating its most obvious plot twists as inside baseball without ever taking the time to explore how they affect anyone.

Congressman Stephen Collins (a characteristically stiff Ben Affleck) is in the middle of investigating a military defense contractor when his lead researcher coincidentally steps in front of a moving train--and once it's revealed that they were in the middle of an affair, the press explodes with gossip and hearsay. Collins's buddy and WASHINGTON GLOBE reporter Cal McCaffrey (Russell Crowe) senses there's a lot more to the situation than meets the eye, and as he makes his way through his usual suspects in the investigation, he's forced to bring into the fold the author of the GLOBE's political-insider blog, Della Frye (Rachel McAdams, functionally invisible). The point, I guess, is to teach Frye that journalism is a dirty business that extends beyond her opinion-based parameters--yet all we ever get out of it is the sight of black helicopters hovering overhead as McCaffrey's stoolies eye their surroundings nervously.

The whole thing reeks of one of script doctor Tony Gilroy's lesser efforts: For as smart and insightful as Gilroy can be on the subject of massive government/corporate cover-ups, there's nothing to this movie's conspiracies, really, apart from the fact of their existence--nothing revealed of the toll they take on the participants except that there is a toll. (At least Gilroy's Duplicity was playful enough to acknowledge its own superficiality.) Who slept with whom, who knows what, and who shot whom in the Embarcadero in 1879; without the burden of examination, it's not much better than your average daytime soap. So what else is there? Standard thriller pap, unfortunately, with McCaffrey being stalked by the poor man's Chigurh (Michael Berresse) as he's led from one false lead to the next, until finally he realizes that even the shallowest waters in scenarios like this sometimes run impossibly deep. Tell but don't show: the guiding principle of State of Play. Originally published: April 17, 2009.