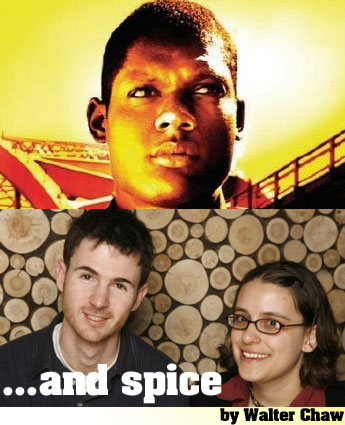 April 26, 2009|So here's the deal: I don't care about casting, I don't care about locations, and I don't really even care about how or why an idea came into being. Inspirations are interesting sometimes, sometimes not; you ask the inspirations question and you usually get either apathy or irritation. Very seldom do you get something revelatory. Do any kind of research before most any kind of movie-related interview and you'll find that if the questions weren't already asked, the what-was-it-like-to-work-with?s and how-did-so-and-so-get-involved?s and what-did-it-feel-like-when?s, then the answers were already spoken without provocation. It would be a particular shame to burn a promo-tour/DVD supplement-type inquiry on filmmakers like Anna Boden and Ryan Fleck, who, between the surprising Half Nelson and the even more surprising Sugar, actually seem interested in having a dialogue with their audience. Sugar essays a good dozen hot-button issues without giving a one of them soapbox or short shrift; it treats its characters with the same respect with which it treats its audience. I came away from meeting Ms. Boden and Mr. Fleck in the "Tokyo Room" of Denver's Hotel Monaco with a gratifying reminder that on occasion, it's still possible to divine the wellspring of the art through conversation with the artists.

FILM FREAK CENTRAL: Did you go down to the Dominican Republic with an agenda and come back with something else?
ANNA BODEN: I think so.
RYAN FLECK: Well, did we ever have an agenda?
AB: I don't know if we ever had an agenda, but we did go down there with the thought that we would make a movie about these baseball farms that Major League teams have going and that whole immigrant experience and we found that when we got there that it was all more complicated than we thought.

Would your movie have been more ordinary if you'd found what you'd expected to find?
AB: Without a doubt.
RF: There's nothing that's more boring than absolute evil, is there? I'm not interested in a character that just doesn't... you remember that movie City of God? The bad guys in that movie are just really, really bad--they're cut-outs...
AB: ...And it takes you right out of the movie. I remember thinking, really? Really? Is this guy really cackling while he's killing children? There's no moderation. It's ridiculous.

And counterproductive.
AB: Exactly.
RF: You lose sight of what the movie's about because it's...it's...

Because it's never about anything else?
RF: (laughs) Right.

See, the older I get the less certain I become.
AB: That's true--Ryan especially...
RF: What? Me? You didn't have any growing to do?
AB: (laughs) No, I didn't mean that--listen, we would have had a much different movie if we go down there and everyone's, you know, evil or cracking whips or if these guys weren't completely aware of what they were doing and what they were getting themselves into.
RF: They're already to a place where Major League players have come back from playing in the United States and so the young guys have this built-in support system. I think that if we came, you know, when these camps were just starting up that we might have a different story--but we didn't, today, get any sense of privation or exploitation of these players.
AB: Which isn't to say that we didn't meet any guys that weren't mean-spirited or obnoxious, just that they were no more representative of the whole than the ones that were really invested in the well-being of these guys--I guess we discovered along the way that the story that we went there to tell wasn't the story that was the most interesting to us.

Did the story you wanted to tell anything to do with the power and vagaries of communication?
AB: How do you mean?

Isn't Half Nelson about communications across barriers? Isn't that what Sugar is about, at its essence, too?
RF: Well, not consciously.
AB: But it is what we want to do, to talk about how people relate to one another--maybe come to some kind of understanding. In a way, the process that we went through with both movies is a little like the progress of these characters: that you begin with stereotypes and in exploring the characters and how they interact with one another, you hope that you begin to get at some kind of humanity.

Tell me about the religious aspects of Sugar.
AB: We didn't intend to talk about it at all.
RF: But once we got down to the Dominican Republic you'd see it everywhere, this deep-seated faith. It would come up casually in the language "God willing" this and "with God's grace"--and the wearing of the cross--it was so deeply ingrained in the culture down there that it would have been dishonest if we didn't write that into the characters.

Did it make its own parallel when you got to Iowa?
AB: I think it was natural that this be part of that story--of what happens not just when he loses his literal support systems but when he loses his spiritual ones. When you're in this place that we were in, in Iowa... Yeah, I think there was an obvious parallel there.I think we were both interested in religion a little as another kind of identity that people surround themselves with.
RF: It was another way that people could identify each other, you know, distinguish themselves from one another.
AB: We didn't get any sense that it was antagonistic or meant to be exclusionary in any way...

Though, by its nature, it's exclusionary.
AB: (laughs) You said that. No, as soon as we got there, they'd ask us what church we went to and stuff and it didn't feel like they were judging us really as much as they were just trying to get to know us in a way that they knew one another.
RF: A cultural marker.
AB: But just as in the Dominican Republic, they were so gracious. There'd be guys down there going home for the weekend and we'd ask to go and they'd say, "Sure, come on," and we'd get this amazing, intimate access to their families and their stories--who they really were. In Iowa it was pretty much the same thing.

Except for the time...
AB: (laughs) Except for the whole romance angle. I think that they were afraid of how their church and their community would be portrayed so before they let us shoot in the church, the pastor there had a lot of questions about how that romantic subplot was going to get played out. I think that they were worried that there'd be premarital sex or something and that...
RF: That the people from New York would bring shame to their small town.
AB: But once we explained to her that the young girl is true to her religious upbringing...

Did you sense that it had anything to do with discomfort with miscegenation?
AB: The issue that stops that relationship isn't race but religion, I think, if we're talking about boundaries and borders in our work that... In any case, the concern seemed to genuinely be around the question of sex and not the question of whether Sugar was Black and Anne was white.
RF: We're hoping that the movie is about the choices that our characters make confronted with the situations that they're forced into confronting.

Both this and Half Nelson deal with the intersections between white and black culture.
AB: They do--but it's not what we were particularly interested in.
RF: We wanted to make films about what happens when different ideas and cultures clash. We're interested in what makes one place a home for someone and alien to someone else. We like to tell stories, I think, about lines.

I didn't have high hopes going into Half Nelson but I think that it worked on me by the end because of that care in avoiding answers while examining choices. I find that I don't really trust people who have answers.
AB: It's true. People that claim to have answers are not to be trusted.
RF: I think that the danger in making movies is that you're in the position to give answers, you know, the position to create characters and situations that are black and white and to maybe lose sight of ambiguity.
AB: We're really just interested in making movies that we'd want to see ourselves and we really don't want to see movies that have one point of view. I think that the process that we put ourselves through after we find a story that we're interested in has a lot to do with being sure that the assumptions that we go into something with don't dictate the final story.

Do you consciously pursue, then, genres fraught with cliché?
RF: No, not at all. I think it's just that, like Anna said, we want to make movies that we want to watch and that, more often than not, has its start in genres that are more common.
AB: I think it's important that we don't consciously pursue, you know. If we try to make a story conform to what we think it ought to tell we end up doing the things that we hate. (laughs) We like ambiguity.

It's true. The audience for that film died a decade ago.
AB: (laughs) So there's hope, right?

Honestly? I don't know. I think people abhor ambiguity and that studios are right not to invest much in their publicity. I mean, look at Synecdoche, NY--which is done making money at around $3 million--and The Wrestler topping out at about, what, $30 million? Then there's Slumdog Millionaire that's at $150 million and rising.
AB: We loved The Wrestler. Amazing film.
RF: That character is just unbelievable.

And for us being in the "audience," we all three saw Duplicity.
AB: (laughs) But for free.

Ah, this is true.
AB: I think our hopes for Sugar don't extend much beyond having just made it and done it as honestly as we could.
RF: I mean, we hope everyone sees it, but just making the movie is a huge achievement for us. We're exhausted. Honestly.