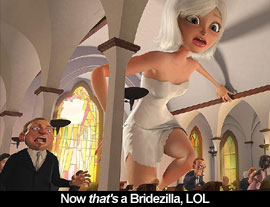 by Walter Chaw As a joke, a pal and I once described the ideal movie as an epic, feature-length battle between robots and dinosaurs. DreamWorks, as a kind of joke, too, I think, have now released the animated Monsters Vs Aliens in a vaunted 3-D technique that enhanced a few scenes in Coraline last month but feels more the gimmicky affectation here. It feels, in fact, like the entire reason behind making a film that's content to trot out those old kid-flick stand-bys of accepting differences and learning to love who you are as the entire backbone for grand, city-destroying slapstick. The most interesting thing about it might be that a sequence buried in the middle of the closing credits posits a world-ending nuclear holocaust initiated in a war room set borrowed directly from Dr. Strangelove. It's a weird thing to have in a children's movie (odd, too, appearing so soon after Alex Proyas's own apocalyptic Knowing), and the zeitgeist sweepstakes are up and running in 2009 with the possibility that we're at the end of days infecting even this most optimistic, empty, popular of films. The rest is your run-of-the-mill kid's flick: noisy, senseless, and, save a couple of moments where Seth Rogen's voice made me giggle, not terribly entertaining. It has an ugly bad guy, Gallaxhar (voiced by Rainn Wilson), who clones himself, setting up the tension between individuation and the politics of mass hysteria, the unsubtle suggestion being that while good guys Bob (Rogan) and Link (Will Arnett) are stupid, they're not anywhere near as stupid as the enemy.

It's hard to work up much pique one way or the other with Monsters Vs Aliens. This is absolutely innocuous stuff, largely inert and, for all the vaunted graphics on display, unable to hold a candle to WALL·E or even, in terms of stylishness, to Brad Bird's decade-old The Iron Giant. Its central monster, the hapless Susan (Reese Witherspoon), turned into a fifty-foot woman by a meteor strike, follows the standard empowerment line, and if that's not obvious enough, there's a parallel development for mute mutant caterpillar Insectosaurus that ends with, brace yourself, its metamorphosis into a giant butterfly. Good Lord, it's a metaphor, am I right? As far as depth goes, that's about it, as the hawkish military led by General W.R. Monger (Kiefer Sutherland) and a buffoonish President (Stephen Colbert) roll out their secret hangar full of monsters (including man-size Dr. Cockroach (Hugh Laurie)) to battle an invasion of octopus-like aliens; predictable, if slightly disturbing, mayhem ensues. (The dismantling of the Golden Gate Bridge is pretty unpleasant stuff.) The levelling of part of downtown San Francisco ranks fairly high on the no-longer-fun-o-meter, with the number of gigs burned in its replication adding to the terrorist discomfort. It's a sign of the times that the picture is unintentionally disturbing now and again (and during that apocalyptic stinger, of course) despite a tone that is relentlessly upbeat and vacuous. Monsters Vs Aliens is so disinterested in the apocalypse, in fact, that a long middle section deals with Susan's broken engagement to selfish weatherman Derrick (Paul Rudd), marking it as an ode to girl power in the one animated film least likely to be patronized by girls. On the bright side, it's short. Originally published: April 1, 2009.