It's all very silly, I assure you. But in-between the fart jokes, pratfalls, and homophobic asides (not to mention the sex), Batbabe: The Dark Nightie reveals a disarming intelligence in its lampoon of the second-highest-grossing film in American history. Taking its cited inspiration and integrating it with the major plot points of the Tim Burton-era films as well as the campy sensibilities of the Adam West period (the mob conference Joker crashes is now populated by obscene versions of Bats's rogues gallery, while the disappearing pencil is replaced by a dildo, natch), Batbabe's general irreverence offers an interesting new perspective on the material: Whatever critical and philosophical success Batman achieved in the last year, he'll always be haunted by the spectres of Joel Schumacher and Arnold Schwarzenegger. When "GLOBAL WARMING" pops up instead of "POW!" in a familiar fight sequence, the question isn't whether The Dark Knight is smart enough to tackle its hefty themes--it's whether its long and varied pedigree impedes it from being taken seriously.

It's a question that has long pestered the porno business, and writer-director John Bacchus takes great relish in forging that link. By likening the Joker's moral chaos to the Jerker's sexual chaos, in fact, it's not unreasonable to assume that The Dark Nightie sees The Dark Knight as more a brother-in-arms than a media Goliath, both full as they are of statements about aspects of human nature no one really likes to talk about. Maybe that's why the film seems so uncomfortable when the time comes to actually deliver on its promises: Bound by expectations of the softcore genre, The Dark Nightie makes awkward transitions into girl-on-girl set-pieces that are almost aggressively unrelated to the scenario at hand. Certainly that's the primary reason why anyone would rent this in the first place, yet you can't help but feel that some potential was squandered; the picture has so little faith in its own cleverness that it can't muster up the energy to capitalize on it. Indeed, it runs out of ideas altogether around the hour mark, at which point the sex scenes start to suggest placeholders intended to stave off boredom until something interesting occurs to the filmmakers. By the time Batbabe has an encounter with "Mr. Sleaze" (a dude sporting a radiation suit and a heavy German accent), you wish that it had relied a bit more on its inherent camp value, or on its ridiculous wordplay, or at least on Clancy Fitzsimmons's uproarious Gary Oldman impression--if only because that appears to be what the film itself wants.

As an early example of porno chic, I suppose you could say that forty-year-old skin flick The Stewardesses is a little more at ease with itself: there's almost nothing to the damned thing but a cadre of flight attendants getting drunk/stoned and going on various (improvised) sexcapades. The film was introduced to audiences as a 3-D work-in-progress in 1969, only to incorporate a few dramatic scenes in 1971 for mainstream credibility--not that the piece became any more linear. (I'll be damned if I had any idea why one of the stewardesses' pilot-beaus is clocked over the head with a chair in the middle of sodomizing her.) Needless to say that an eleventh-hour plea for legitimacy involving rape and suicide hardly exonerates the acid-influenced dry-hump of a lamp and a lot of random shit thrown at the screen--and, as the picture leaves us with the image of a new band of stewardesses (presumably with their own batch of, like, crazy perversions), we're left to ponder the existential implications of that timeless message: women be fucked-up, yo. At least The Dark Nightie never asks you to take it seriously. 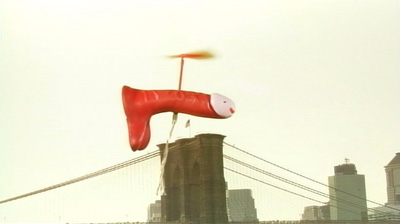 THE DVDs
Perhaps reflecting these belt-tightening times, Seduction Cinema brings Batbabe: The Dark Nightie to disc on a homemade burn. Possible but improbable that the 1.78:1 anamorphic widescreen image would've looked any better on a professionally-encoded DVD, however, considering the production's consumer-DV origins; and while it's punctuated by some hiss, the accompanying DD 2.0 stereo sound is perfectly serviceable all the same. A feature-length commentary finds film historian/New York cable-access host Ed Grant interviewing executive producer Michael Raso. Although they aren't terribly concerned with discussing The Dark Nightie itself beyond its profit potential, they share interesting facts about the history of the Seduction Cinema label and the basics of softcore filmmaking. "Deleted Scenes" contains one sex scene (approximately eight minutes in length) and three non-sex scenes (totalling one minute), the latter of which reveals that they're saving Henrietta Bent's Two-Face transformation for a theoretical sequel. A "Spoof Trailer Vault" contains a long string of previews for porno parodies: SSI: Sexy Squad Investigation; Kinky Kong; Cloak and Shag Her; Lord of the G-Strings; Spiderbabe (starring good old Misty Mundae); Sexy American Idle; and, the most promising of the lot, The Insatiable Ironbabe ("Hello; Horny Fark Industries speaking--this is Bumper Boobs, how can I help you?"). An ad for the Alternative Cinema catalogue caps everything off. 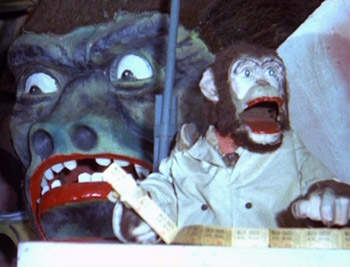 Shout! Factory's lavish "2-DVD Set" of The Stewardesses' 1971 incarnation labours to solidify the movie's reputation as a milestone in the history of grindhouse cinema and porno chic. The first disc gives you the choice of watching a severely-windowboxed, fullscreen transfer of the 3-D film in colour or black-and-white--the latter option prepared specially for this release on the basis that it "may provide a better 3D experience." (I can't say that it does: Anaglyphic 3-D is weak sauce no matter how you view it.) Attendant DD 2.0 mono audio is a tad muffled, with several scenes of dialogue exhibiting an excruciating level of hiss and crackle, though happily that also means the corny musical soundtrack doesn't insist on itself. "Extras" on Disc One come without audio, beginning with the minute-long credits sequence from the '69 version--basically a simple pan across a series of title cards. It isn't well-preserved and, thanks to the 3-D, the giant specks of dirt are red and blue and draw undue attention to themselves, but I was glad I stayed for the final card, which states that the picture was written and directed by one "William Cristiphér Allane." Guess you didn't know this was gonna be a hit, huh fellas? "Deleted Scenes" (9 mins.) consist mainly of incidental shots. A seven-minute 3-D screen-test features two lovely, previously-unseen young women throwing balloons and blowing bubbles and noisemakers in your face. I found the effects much more effective here than in The Stewardesses proper, maybe because they're so utterly lacking in pretense. Upon insertion of the platter, you'll be greeted with trailers for "Greg the Bunny: The Best of the Film Parodies, Volume One" and Jeffrey Ross: No Offense - Live from New Jersey, along with a commercial for Getback.com.

Disc Two presents the movie in 2-D, meaning you can finally see the pastel wardrobe and floral wallpaper designs in their original glory. Snark aside, the still-windowboxed 1.33:1 image is so redolent of the period that the extensive restoration efforts of SabuCat Productions' Jeff Joseph, documented elsewhere, are easily sold short. Extras launch with "A Brief History of 3-D" (11 mins.), a rundown retracing the format's development from early Lumière shorts to the era of polarized lenses to the modern day, complete with threadbare explanations about how the first two were implemented. The piece semi-persuasively argues that CinemaScope killed 3-D's commercial promise before The Stewardesses brought it back--but the real attraction is saved for the end, when we're treated to a handful of clips from those early 3-D'ers and a trailer for 1953's The Maze in which lead actor Richard Carlson attributes his grey temples to working on the picture. "The Stewardesses: How It Was Shot and Shown" (3 mins.) simultaneously compacts and expands on the same information for more technically-minded viewers, but Joseph explains them so thoroughly that even my Luddite self found it fascinating.

Next up is "How The Stewardesses Took Off: Interviews with the Cast and Crew" (21 mins.), a retrospective making-of that characterizes the shoot as a fun experience and details the various subtle approaches (and outright fibs) that went into advertising. The highlight is the film's star, Christina Hart, who refuses to echo the party line in coldly dismissing the final product; she put me at ease. Rounding out the set: the theatrical trailer and a sketch from "SCTV" (6 mins.). It's an instalment of "Monster Chiller Horror Theater," of course, one in which Count Floyd announces "Dr. Tongue's 3-D House of Stewardesses," an incisive cross-section of the mad-scientist dreck and softcore pap on which 3-D subsisted throughout the '50s and '60s. Gotta love John Candy's Peter Lorre-cum-Boris Karloff voice--and I'll probably have difficulty seeing the next RealD extravaganza without imagining the "lunging" sound effect from this sketch. A fatuous essay by "3D historian"/crewmember Daniel Symmes is included as a foldout insert along with a pair of 3-D glasses. That's one pair less than promised on the packaging. Originally published: March 9, 2009.