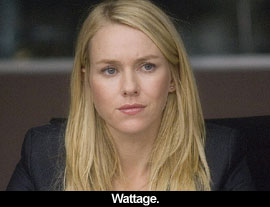 by Walter Chaw There's a shootout at the Guggenheim in the late-middle of The International that is the only real clue director Tom Tykwer had anything to do with the film. The rest of it, despite its title reminding of that Christopher Walken SNL skit about velvet smoking jackets and attempted rape, is just more of the same musty prestige-y Topical Picture™ that usually stars people like Sean Penn or Kevin Costner instead of, as The International does, Clive Owen and Naomi Watts. Bland and blander, as it turns out. A rumpled Owen is Salinger, some kind of ill-defined crusader for justice with a badge from Interpol and a dark past from Syd Field, while Watts as ADA Elly, who spends her first scene with a Boston/Newark accent and the rest with her standard-issue Yank. They're tepid on the trail of a big giant bank that has a nefarious plan to control debt, which I confess is what I thought banks do. With the picture more interested in mashing its thumb against the "Relevant" button than in creating characters of interest, villains who frighten, and situations that involve, Tykwer, for his part, seems at a loss as to how to employ his agile camera and so trusts a premise that's already feeling a little mothballed for the collapse and bailout of our banking system. It doesn't matter that The International doesn't know what to be from one minute to the next--what matters is that it's an exact replica of The Interpreter in every way that counts and is, therefore, completely, immanently, blessedly forgettable.

Appears that Salinger's been on the trail of a few evil bankers for years, and the movie begins in medias res with the assassination of someone Salinger knows (followed fast by the assassination of someone else this someone was chatting with a few minutes prior to his assassination), whipping our man into a mild lather. But why, oh why, won't anyone believe him? Blank stares are his only reward as he butts heads with the local constabulary, evil lawyers, and corrupt officials, dooming everyone he talks to with a paranoid hit. Only wide-eyed, stalwart Elly is on his side, her presence more an excuse for Tykwer to shoot on location in New York (and at the Guggenheim!) than the mark of any dramatic counterpoint or sense. It's a deficiency the film seems to notice and tries to address with one character asking her why the NYPD could possibly be interested in a German bank. The picture really fails not because the premise that banks have gone off the reservation over and over again and continue to get bailed out no matter their offense is far-fetched in the slightest, but because the details are so tidy. Although "I'm confused" is the script's most reliable crutch (at least three different characters utter it), the irony is that the film isn't confusing, drawing a straight line from beginning to end--and that includes an ironic epilogue that's only ironic if you're a complete tool. All that's confusing is how it could be that an international hitman is wearing a one-of-a-kind shoe manufactured by a single company and prescribed by one lone quirky doctor (Tibor Feldman) in the entire Naked City. Surely, you jest.

For what it's worth, über-villain Jonas (Ulrich Thomsen) is pleasantly euro-trashy in an Alan Rickman-in-Die Hard sort of way and chief henchman Wilhelm (Armin Mueller-Stahl) is appropriately grandfatherly in spite of a weird late-game conversation in which it's revealed he was...a Cossack? No matter, The International is a puff piece dressed up in Oscar finery that's found itself late for the ball, dumped in the winter wasteland as too boring for summer and without enough paternalistic racism or Holocaust for awards season. It's the type of movie that encourages the rubes in the cineplex daft enough to believe that this picture is more thoughtful than something as genuinely fertile as the "for kids" Coraline to cluck at the white-collar shenanigans and nod knowingly at one another that they were already "in the know" about such things as malfeasance occuring in the marble halls of high finance. How they'll fit that smug sense of liberal self-satisfaction alongside a lovely, kinetic gunfight in a space only ever used better on film in Matthew Barney's Cremaster cycle is an act of delusional creativity that's already more fascinating than anything in The International. Originally published: February 18, 2009.