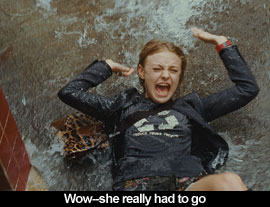 by Walter Chaw Here's the thing: I like Paul McGuigan's movies. They're facile, it's true, eye candy--if, on occasion (Wicker Park), brilliant eye candy--and slick genre pieces that aren't really about anything in the sense that they aren't at all resonant in any meaningful way. He's done a Hitchcock (Wicker Park again) and a gangster flick (Gangster No. 1) and a costume epic (The Reckoning) and a caper (Lucky Number Slevin), and now with Push he's done his superhero flick; and not a one of them has something to say outside itself. They're post-modern in that sense, pure genre pieces reliant entirely on our conversance with the medium to provide their form and function. They're feature-length music videos--and I mean this as a compliment--that hum along with a kick-ass soundtrack, sexy imagery, and the ghost of a narrative to string it all together. They go down easy and there's not much of an aftertaste. That being said, Push doesn't benefit from familiarity: the craft is excellent, there are moments in it that harbour tremendous potential, but at the end of the day it's just another superhero movie that suffers from not having Bryan Singer's alienation issues or Christopher Nolan's existential identity crisis. What works in McGuigan's other work as a nice corrective to genres burdened by too much close scholarship washes out in Push as either too late or, more likely, too soon. In any case, what plagues the film is that it lacks much in the way of difference.

Seems those wacky Nazis are at it again as their psychic research experiments from WWII spiral into a shadow government intent on breeding X-Men for future use. Key mutie is "pusher" Kira (Camilla Belle), ex to hunky "mover" Nick (Chris Evans), who has found himself the protector of tween "watcher" Cassie (Dakota Fanning). It's more Firestarter than X-Men, more a legacy picture with both Nick and Cassie having made promises to absent parents instead of dealing with their uniqueness in a scenario that doesn't spend any time on any human perspective. Juggling the need to establish mythology with the need to not bore the paint off the wall, Push succeeds in every way save the most vital in failing to establish a real world for its fake people to inhabit. It's telling that the best sequence in the film is the one in which expat mutie Hook (Cliff Curtis) changes scraps of paper into money and an earring into an exact replica of a bead our Cassie sees in her visions. It works because the freaks don't respond to it (it's natural in their world) while the waitresses and whores that flit in and out of the scene respond to it in spades--to them, this shit is crazy. The rest of the film is crazy shit no one in the audience responds to because no one on screen bats an eyelash; when crazy shit has no rules to govern its parameters, you get dangerously close to a Timur Bekmambetov joint: random frenzy and word salad. Without the context provided by a good a sounding board, all the explanation in the world ain't gonna make a lick of difference.

What Push has going for it is that McGuigan is excellent at noise and motion; even though there's not much suturing it together and nothing at all in the underneath (and even though there's no one in the film having their minds blown), at least it looks fantastic. It's hard to dislike the "bleeders," or a scene in a crowded Hong Kong marketplace that involves exploding fish. It's hard to dislike a demonstration of the "pushers"' art as Kira takes control of a cord of Chinese attackers (more civilian pawns, please!) in a scene that reminds me that I'd love to see Dan Simmons's Carrion Comfort be made into a movie one of these days. For the rest of it, the missed opportunities involving little girls lost and little boys doing their best to live up to the image of their fathers feel great. The picture simply isn't insightful as satire or clever enough to sustain its mythology or exciting enough to carry it over its sometimes-windy attempts at exposition. What remains in its favour is a movie set completely in Hong Kong that gives that culture its dignity, refraining from trashing its archetypes and hijacking its formalism à la Slumdog Millionaire. Push is a near-miss, a sure cult fave in the secondary market, and a Dakota Fanning fetishist's delight, boasting the pint-size thesp in micro-mini and drunk as a lord in another of those "hard to dislike" sequences. Too bad it couldn't keep its plates spinning. Originally published: February 11, 2009.