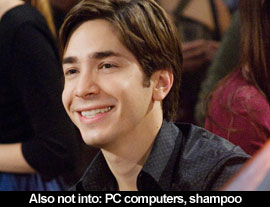 by Ian Pugh It starts off as a puerile game of "Six Degrees of Separation" and just goes downhill from there: Janine (Jennifer Connelly) is married to Ben (Bradley Cooper), who's attracted to Anna (Scarlett Johansson), who has an awkward relationship with Conor (Kevin Connolly), who went on a date with Gigi (Ginnifer Goodwin), who gets dating advice from Alex (Justin Long), who killed the rat that ate the malt that lay in the house that Jack built. There are about five more movie stars inhabiting He's Just Not That Into You, but one would be hard-pressed to recall their characters' names without consulting the IMDb, and that's pretty much all there is to them. (The combined talents of Ben Affleck and Jennifer Aniston result in a force so monumentally bland that it's either not surprising or very surprising that no casting director ever thought of it before.) My colleague Walter Chaw once wrote that you'll never refer to the characters in Crash by anything other than their broadest generalities, which is exactly how this movie would have it, since it makes it that much easier to project yourself onto these pale stereotypes and reduce the gender divide to a showdown between insensitive assholes and hypersensitive maniacs. Men are from Mars, women are from Venus, and it's a small world after all. Too easy--too tempting--to call He's Just Not That Into You the romcom equivalent of Paul Haggis's Oscar-winning disaster, but it doesn't give you a reason to think otherwise.

I can't speak for the self-help book that inspired it, but He's Just Not That Into You certainly regards itself as a guide of sorts to gauging romantic personalities, with Long's barman/love doctor offering plenty of logical advice to determine when someone isn't interested and when to move on. Naturally, though, it's a lot easier to be wise if your examples have been indiscriminately shoved into rigid categories (the cuckolded wife, the calculating cynic, the friend-zoned nice guy) whose motivations are given no further rhyme or reason. It's one thing to exemplify the subtle social cues that come with the territory, but in its adherence to a set of "rules" about the dynamics of dating, the picture becomes too broad and too all-encompassing to have any practical application. And because it has some misguided obligation to the conventions of its genre, even the much-maligned "exceptions" to these rules--the movie's idea of a wild card--are rules in and of themselves.

Rendering its own narrative useless, paring down its romcom machinations to a series of dispassionate checkpoints, and dismissing the concept of individual romance as mere yes/no banality, He's Just Not That Into You also fosters an aggressive ignorance of anything that doesn't fall under its perceived white, hetero jurisdiction. (Gays and minorities are sidelined as a support team for the more "recognizable" personalities, relegated to the role of sassy eunuchs and oh, snap! reaction shots.*) It's more than a little ridiculous that the film should be so narrow-minded, considering that it badly wants to conclude with a message about figuring out where your life is going and whether or not that path includes a significant other. A good, deceptively simple thesis statement, all things considered--pity it couldn't deliver that message without resorting to prosaic Carrie Bradshaw-isms.

Despite halfheartedly touting the importance of forging an identity extracurricular to the pursuit of relationships, the movie never makes it clear what half of these people actually do for a living. It's hard to miss the obvious details (somebody writes for a magazine, somebody else sells real estate), though as far as I could tell, their primary vocation is to congregate in the same building on a daily basis to discuss their love lives with each other--and so the concepts of individuality and introspection are basically reduced to the lyrics of the "Diff'rent Strokes" theme. Honestly, what He's Just Not That Into You really needs is some unscrupulous puppeteer to resurrect Ben Affleck's ventriloquist-dummy routine from Smokin' Aces. Not only would it lend some weight to yet another slack-jawed performance from Affleck, but it would also act as a tacit admission that these characters are lifeless marionettes in service to extremely limited notions of happiness and compromise. Originally published: February 5, 2009.

*Not to say the film never tries to incorporate them into its "universal" worldview: sure to make the shortlist for Most Appalling Moment of the Year is a scene that ostensibly takes place in an African village in which several women conclude that maybe the guy one of them went out with and hasn't heard from since "forgot [her] hut number, or was eaten by a lion." return