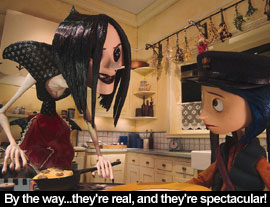 by Walter Chaw SPOILER WARNING IN EFFECT. Best known for The Nightmare Before Christmas (although a lot of people still think that was directed by Tim Burton), Henry Selick returns to the realm of creepy stop-motion animation with an adaptation of Neil Gaiman's slim volume Coraline. Despite the addition of a character and an ending altered for, one suspects, purposes of padding, the book's sense of creepiness and agile grasp of the long blues of the pre-pubescent girl alone in a house with inattentive parents remain pristine. The picture's message retains the British-nanny scold of "be thankful for what you have," though Dakota Fanning's vocalization of the title character leans in and out of a Northwest American youbetcha. It suggests that of the many demons Coraline fights, the most treacherous is the grey beast Populism--the one that demands Teri Hatcher voice Mother (and Other Mother) and Ian McShane upstairs Russian circus performer neighbour Bobinsky. But credit Selick for in essence attempting a Charlie Kaufman film for children with Jan Svankmajer imagery--his invention almost making one forget that it would've worked better in an older, more mysterious, more fraught place than rain-swept Oregon. It is, after all, a picture that illustrates the horror of perfect domesticity in favour of perfect dysfunction: here, the threats of Stepford Wifery far outweigh the threats of a dual-income family, house poor and scrabbling to get by. Viewed as a movie about class, the three levels of Coraline's pink house--the top rented to Bolinsky and his dancing mice, the bottom to Spink & Forcible (Jennifer Saunders/Dawn French)--can be seen as some social stratification of which Coraline's Mother does not suffer well.

Coraline discovers a small door in the living room that opens to a brick wall while waking and a Being John Malkovich corridor while ostensibly asleep that connects her house to a mirror-world in which her Other Mother and Other Father (John Hodgman) live. The main difference between her Other and real-world folks is that the former have buttons for eyes (the film opens with stitching as the primogenesis to the tale unfolding)--though Other Mother is also interested in cooking and letting her baby play in the mud. The corrective to Coraline's perceived neglect, the film's first half deals with her emotional betrayal of her actual parents and the second with the Other Mother's seduction of her little project for purposes nefarious. It's tempting to read out all the things that a text this archetypical provides for in abundance, irresistible to ferret out from it all the things it wants to talk about in a young girl's movement through forests of apple trees and webs prowled by castrating, poisonous mothers. The conclusion sees Coraline's parents temporarily transformed not by the events of the film so much as by what we surmise to be a temporary financial salve. Coraline's final reward in the picture is a pair of yarn mittens she hopes will distinguish her from her drab schoolmates in the coming year, while the transgression fuelling what has transpired is left behind a locked door and down a bottomless well. Coraline is terrifying, of course, but less because Selick's artistry is wonderfully askew than because the material is watertight. The wilful girl domesticated--this heroine of her own imagination suturing off rooms in her head--is pure late-Hitchcock, and to liberate her from the love of parents too in love with the mendacity of making a living Coraline relies on a boyfriend, Wybie Lovat (Robert Bailey Jr.), whose name is an anagram of "bloviate," the quality in him she finds most distasteful.

Very much a film that speaks to us contemporaneously, Coraline dazzles with showstoppers like a magic garden populated by Lewis Carroll-ian snapdragons and Other Father astride a robot mantis. It's tight, too, its images never flying off the rails but rather adhering to a stringent dream logic that compares, late in the game, the shadow falling across the moon to the shape of a button. It's rich with symbols for connection and dissociation, from each patchwork minion dispatched by hero cat Cat (Keith David) releasing its guts in torrents of sand (thus announcing the picture's debt to both Alice in Wonderland and Svankmajer's adaptation of the same, Alice) to an encounter with a trio of child-ghosts ghastly for their expressions, which are frozen at the moments of their betrayals. It's laudable in its uncompromising nature and for surprising through to the end with its invention and the obvious, meticulous-as-needlework care that was taken in pulling this story through theme-by-theme. And the much-hyped 3-D photography is impressive without becoming distracting: it doesn't feel like a gimmick, and the literal depth it gives the picture lends it menace in the obvious scenes--and in one not-so-obvious instance where the Other Father is introduced being played by a piano. Coraline isn't quite the masterpiece it might have been without the relocation and with the aid of voice actors instead of names to justify its expense (see The Nightmare Before Christmas for an example of a film that hired voices instead of stars), but it is a lovely picture for all that, packed to the brim with evil, hunger, and the reasons we used to leap across the dark at the top of the stairs. Originally published: February 11, 2009.