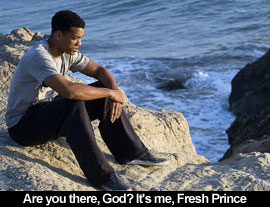 by Walter Chaw SPOILER WARNING IN EFFECT. I'm gonna take a stab at the title: Seven pounds is how much an Oscar weighs, am I right? Will Smith reunites with his Pursuit of Happyness director Gabriele Muccino to fashion another awards-season failure that proves every bit as icky and misguided. An extended episode of "Secret Millionaire", Seven Pounds transforms a Melvin and Howard conceit into the story of an undercover Samaritan intent on changing the lives of seven worthy strangers. Why? It doesn't really matter, does it? Not when Smith, as Ben Thomas, a guilt-wracked IRS agent/aerospace engineer trying to atone for the tragedy that is his life, turns on the red-rims and the waterworks, all quivery lips like the box jellyfish Ben keeps as a pet. There's poor little Emily (Rosario Dawson), with a rare blood type and an enlarged heart (four sizes too big!); and poor little Ezra (Woody Harrelson), who can't get a second look from a truck-stop waitress because, eww, he's blind!; and poor Connie Tepos (Elpidia Carrillo), who's afraid to leave her abusive boyfriend even though her two small children are in peril. Enter Bagger Vance--er, Ben Thomas--to sweep Emily off her feet, insult Ezra to see if he has a temper (or a spine), and give Connie his house. Throughout, we're treated to flashes of the calamity that's brought Ben so low as Smith's charisma and innate likeability remain the only things keeping the film remotely compelling to the extent that it is. It's an old-timey melodrama at its heart, nothing on its mind except tugging at the heartstrings and bothering awards-season viewers with the irritating tickle that they're being diddled without their consent by another smooth-talking, empty-headed bit of unforgivable--and gross--treacle.

A classic in the bizarre sub-genre of Super Duper Magic Negro-as-martyr, Seven Pounds joins such wonderful pills as The Green Mile in propagating the strange notion that in order to restore order in a world in which he's murdered a minivan full of white people, America's second-favourite black guy needs to turn himself into an organ buffet. When it's not wrung out like a damp, tear-jerked hanky, it's going for this love story where a cadaverous-looking Dawson offers sex--which, given her condition, seems like an invitation for Ben to add another pound to his levy of flesh. Ezra barely appears in the film, and when he does, he levitates through it like some kind of daft angel (see also: The Curious Case of Benjamin Button) until it's finally revealed that Ben's sacrifice hasn't yielded Ezra the corneas as you'd expect, but apparently the entire fucking orb. The better, you see, for Emily to gaze soulfully into them and for the audience to collectively flashback to the excrescent Jessica Alba version of The Eye. Seven Pounds is, throughout, ever on the precipice of horror story, shot and lit that way as Ben stalks his quarry through hospital corridors, hinting that way when Ben can't ever quite completely cover the sociopathic sadness in his every waking pronouncement. It's worth seeing if for no other reason than that the picture marks the first time an IRS agent has been a meat-puppet Christ--and the first time since Bright Future that a jellyfish has served as an allegory and an instrument of philosophical doom.

Seven Pounds is the kind of score- and soundtrack-heavy backseat pawing that masquerades as the cream of the Hollywood crop this time of year. Overlong, ham-handed, message-driven, and anchored by a major star doing a dramatic turn, it wants to give the appearance of depth without putting in the actual work required of depth. Not about anything (not altruism, not regret, not hopefulness), the picture weaves its nihilistic, Leaving Las Vegas narrative of self-destruction into a Return to Me-like gory schmaltz-capade that when it climaxes, as it must, with the sound of a haunted heartbeat, the feeling isn't of warm-fuzziness, but of bitter dismay. It's possible that the movie is meant to show the emptiness of regret--but then why the random, throwaway gesture of a bone-marrow donation to an adorable moppet? It's possible the movie is meant to show the inevitability of regret--but then why the late-game melodramatics wherein everyone, except the martyr, finds happiness? While it's certainly possible for a film to not have a message, it's unseemly for one to lack a context or, really, a thought in its head. Ben is never fleshed-out despite his presence in nearly every frame of the picture, and neither are Emily and Ezra. The only genuinely interesting character is the white doctor friend (Barry Pepper) who, with only about five minutes of total screentime, manages to acknowledge the stupidity of Ben's plan and the potential for painful revelation in its execution. (Married to a black woman, he also gives Will Smith's pics this year a batting average of .1000 in the miscegenation derby.) Credit where credit is due: Seven Pounds is absolutely shameless and, in its way, fearless in its desire to play out its concept to the grotesque, gruesome end. It makes sense with the notable films of 2008 (the Synecdoches and Wrestlers), it just has the misfortune of sucking. Originally published: December 19, 2008.