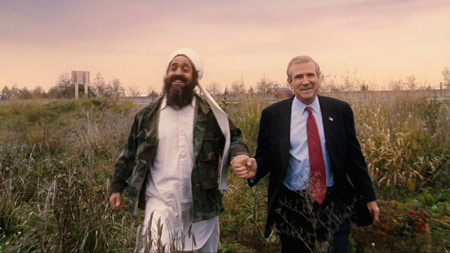 by Bryant Frazer Uwe Boll may not be the world's worst filmmaker, but when he made his name internationally by turning beloved videogame titles into movies (the zombie shooter House of the Dead, the survival-horror adventure Alone in the Dark) that played like cheap, cynical cash grabs, he earned that sobriquet along with the undying enmity of a certain branch of the movie-nerd contingent. Go ahead and run a Google search on "worst filmmaker alive" and see how many times Boll's name comes up on the first page alone.

Postal, however, is not that bad. It's bad, all right--a slapdash collection of poor-taste comic ideas too incoherent to make sense as narrative or farce, assembled with all the cognitive élan of a slow 15-year-old virgin working out his idea of the Best Movie Ever in a darkened bedroom on the second floor of his parents' house while griefing "bitches" and "retards" in Team Fortress 2 on XBox Live. It's often hard to imagine that there's an adult intelligence behind it, but sure enough, there's the 40-something, German-born director making a cameo appearance on screen as himself in "Little Germany," a Nazi-themed amusement park where he declares that, yes, his films are (per Internet rumour) financed with "Nazi gold."

Hard to deny, then, that the man has a sense of humour--despite the general incompetence of Boll's direction, as well as the film's predominant failure of comic timing and its indiscriminate reliance on sophomoric humour to score points with the slope-brow crowd, I actually found myself smiling a few times. Postal works on some level as an outsider's take on the current moment in U.S. history. Just as Mike Judge's barely-released Idiocracy was a snapshot extrapolation of the future of the red states as the blue states might see it, Postal uses its videogame pedigree as an excuse to look at American culture from the outside. Thus, Postal is full of desolate trailer parks, shiftless fatsos, deceitful and/or gullible religious zealots, and an overall level of carnage so high that nobody seems to blink when gunfire breaks out at the unemployment office. And Boll (with co-writer Bryan C. Knight) sends up American paranoia about terrorism by indulging it. Here's an America where al Qaeda really is holed up in the backroom at the corner deli, led by an Osama bin Laden who's played by "Seinfeld" Soup Nazi Larry Thomas and comes off like a half-hearted Tony Soprano type struggling to keep control of a weary crew fast losing interest in jihad.

Indeed, the film begins on 9/11, with a scene set in the cockpit of a hijacked, World Trade Center-bound airplane as two terrorists worry that their heavenly rewards for martyrdom may have been downsized. It ends with "Sammy" bin Laden and George W. Bush holding hands as Chinese nuclear missiles streak earthward, raising mushroom clouds over the horizon. In between, Boll's unemployed protagonist, Postal Dude (a fairly winning Zack Ward), sees his life turn from bad to worse and (naturally) becomes a killing machine after registering the betrayal of his Uncle Dave (Dave Foley), an apocalyptic cult leader with a hefty bill for back-taxes and an entourage of worshipful bikini-clad women. Dave's plan to steal a shipment of a popular but rare children's toy--the genital-shaped, made-in-China Krotchy doll--is complicated by the fact that al Qaeda is using the dolls to smuggle vials of bird flu virus.

Foley has a clear, well-lit, full-frontal nude scene. Verne Troyer is raped by monkeys. Many, many children are shot dead on screen in a squibtastic gunfight, while Boll himself is seen taking a shot to the crotch. And so on. As much as I'd like to dismiss Postal without qualification, it is about time somebody made a movie openly mocking the current American fixation on threats from outside the country's borders, rather than on the substantial dysfunction of American society itself. Boll's political argument is that George W. Bush's America is so bad off already that the threats made by al Qaeda pale in comparison to what we've done to ourselves over the last eight years. There's something punk-rock about his intentions, and I respect that. But beyond that point, there's little intelligence guiding the film's scattershot gags, which appear engineered to offend as many different categories of viewer as possible. Boll seems completely un-self-conscious about racial stereotypes; in the Blu-ray audio commentary, he cheerily admits that he wrote a scene in which a policeman blows the head off an Asian woman in traffic because he lives in Vancouver and harbours a lot of hostility towards drivers--"a lot of times, Asian drivers"--who behave "like retards."

The only audience likely to find nothing disconcerting or distasteful in this ketchupy meatloaf of a movie consists of white guys with a low tolerance for nuance and subtlety and a high demand for babes, bullets, and boorishness--they're Boll's constituents, and he flatters them slavishly. In fact, at the end of his ranting, self-aggrandizing audio commentary, in which he insists, repeatedly, when he's not taking calls on his cell phone, that he's made a film of great import on the current geopolitical scene (sample: "This film is full of courage"), Boll has a few words for his critics. "If you are offended to see the movie, it's your mistake," he declares, "because you got the wrong education and the wrong childhood and the wrong thinking. You have to change, not the movie." Wow!

THE BLU-RAY DISC
The bluster and swagger carry into the bonus featurette, "Raging Boll: The Director Boxes His Critics" (14 mins.), wherein Boll is seen--without explanation--boxing with representatives of somethingawful.com, aintitcoolnews.com and ruemorgue.com, plus a boy named "Chance Mintner" who's billed as a 17-year-old online critic. Boll shows good form in the ring, and each of the writers who presumably panned his films looks hopelessly overmatched. The low-quality video is surprisingly amusing proof that Boll is a master of self-promotion, hoodwinking four kids into looking stupid in order to score the hated director some easy PR points. A 14-second clip that sees Troyer promising to take on Indiana Jones (Postal opened in a handful of U.S. theatres opposite the latest Spielberg film) in front of a badly chroma-keyed green-screen jungle background is the shortest extra feature I've ever seen advertised on a DVD or Blu-ray box. The jacket also touts "Much More," which apparently describes the trailer for Postal. Previews for the Kiwi comedy Dick: The Devil Dared Me To and Boll's own horror movie Seed precede the film (but aren't accessible from the special-features menu). Everything except the feature itself is in standard definition.

Postal was shot on celluloid in Super35, but on BD, its 1.78:1, 1080p transfer not only doesn't look much like film, it also seems more compositionally suited to 2.35:1, the standard theatrical aspect ratio for Super35. Much of the movie has an almost milky, overexposed quality, and many of the highlights are blasted out while the deeper blacks are crushed. My guess is the look is a result of a fast, low-budget shooting schedule that didn't give DP Mathias Neumann a lot of latitude to light his shots, combined with digital colour-correction that aimed for a smooth, music-video-style patina. Grain is barely in evidence, although it shows up in some darker scenes, and the image has that glossy, almost waxen quality that suggests low-pass filtering has been used to remove fine picture detail (such as dust and film grain) during the Blu-ray encoding process. An English-language DTS-HD 5.1 soundtrack is always a welcome inclusion, even if Postal's mix never really takes advantage of the full multi-channel soundstage or the increased bandwidth of DTS. A Dolby Digital 2.0 mix is on board as well, but there are no non-English audio options or subtitles in any language. (The extras are stereo only.)

Feeling a little dirty, I loaded up the Blu-ray package's most substantial extra, the full PC game Postal 2: Share the Pain. I never played Postal back in 1997, though Postal 2 certainly lives to its reputation. We're basically dealing with a junky cross between Grand Theft Auto 3 and Duke Nukem 3D here that gets its jollies in part by having swarthy characters run around screaming "la-la-la-la-la-la-la" while the protagonist drawls, "Did somebody slaughter a goat in here?" Gosh, this movie's looking better already. Originally published: December 2, 2008.