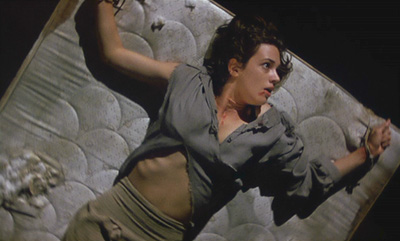 by Walter Chaw It's hard for me to reconcile the Dario Argento of the Seventies through to 1982's Tenebre with the Dario Argento ever after (at least until what I've heard is a remarkable comeback, the upcoming completion of his Three Mothers trilogy). The inventor almost by himself of two distinct genres of film in Italy (and just the concept of the arthouse slasher in the world), a co-writer of Sergio Leone's Once Upon a Time in the West, and a revolutionizer of horror-movie music became this guy who stopped aping Hitchcock and started aping...Jeunet? Himself? Even with Max Von Sydow in the fold (Non ho sonno), the pictures post-Tenebre are cheap auto-knockoffs devoid of innovation and lacking the amazingly imaginative gore that marked Argento's early gialli, the archetypal resonance of his supernaturals, or the transcendent, sometimes sublime lawlessness of his hybrids (like Suspiria, for instance, still a towering achievement). They're almost to a one these gaudy, derivative, exhausted pieces of shit.

It's that much harder for me to understand how Argento can cast his daughter in his films as someone who suffers--in The Stendhal Syndrome especially--all manner of depraved atrocity. I never bought the idea of Argento as a misogynist based on his '70s output--post, I begin to wonder if he hasn't actually bounded past "misogyny" into general, vicious misanthropy. His doesn't seem a benign curiosity about the human condition so much as the obsessive interest that sociopaths develop for police work. His first few films aestheticize violence à la Peckinpah or Woo (or countryman Mario Bava) while the later ones omit the only sin of said pursuit by failing the beauty test, becoming in this way clumsy and pretentious. The temptation is to dismiss Argento's late period as a precipitous decline, but more interesting to consider is that in reducing himself to a pastry bag squeezed for all its worth in productions commensurately thin and calculatedly purposeful, he has forgotten what it is to be a vehicle for something greater than oneself. He's not "waiting for it" anymore but borrowing against his legacy.

Still, the premise for The Stendhal Syndrome--an exploration of the eponymous perceptual condition that has people experiencing dizziness and dementia in the presence of art--is really fucking cool. Our hero, Detective Anna Manni (Asia Argento), is afflicted with said condition; in a bravura bit of self-reflection, Argento has her falling into Brueghel's "The Flight of Icarus" in the auteur's most audacious movement since his heyday. No accident that the Icarus story holds uncomfortable echoes of Argento as father assuming the Daedalus role (Argento the artifactor of image vs. Daedalus the inventor of images; Argento of the sprung, episodic narrative vs. Daedalus the architect of the Labyrinth) to Asia's Icarus. The fate of the offspring, though, gives pause, as Anna is "saved" by mysterious stranger Alfredo (Thomas Kretschmann), who proceeds to rape her and force her to watch as he rapes and kills a different woman. His act is preceded by a re-enactment in his mind of Anna's art intoxication, and his deliverance of her is an escape from the boundaries imposed on her in her profession by her femininity.

Argento equates the syndrome with the perceived frailty of Anna's gender. Post-trauma, Anna cuts her hair, takes up boxing, pantomimes the rape of her hapless ex-boyfriend, and in essence cures herself. Expand the suggestion here to a meta-critical assessment of Argento's own work as a type of pornography that's near-exclusively favored by young men--that he's acknowledging his own role as the artificer of elaborate, aesthetic, violent fantasy. In so doing, Argento's position is that masculinity is in fact the key to success in Anna's police work, separating ratiocination from mysticism in the same stroke that Argento delineates his own "supernaturals" from his gialli. Her "intuition" proves impediment in that it identifies her with objective victimization and renders her weak in the face of Alfredo's masculine aggression. Emancipated from that, what's left in the rape's crucible is the masculine aspect. Nothing new to the rape/revenge ghetto, no question, yet as presented here, with the weight of what appears to be Argento's critical self-loathing, The Stendhal Syndrome serves as a devastating, nihilistic attack on the failures--and fascinatingly, the successes--of Argento's oeuvre to this point.

Post-"resolution," Anna dons a blonde wig and a "drag" personality in a difficult, complicated movement that reminds, of all things, of John Lithgow vamping it up in Brian De Palma's psychosexual shrine to Argento, Raising Cain. It illustrates a deep gender dysfunction in Argento's work as well as the admission that there's no possible resolution to it, from within or without. If it works, The Stendhal Syndrome works as a rather bleak stylistic exercise--a philosophy of cultural evolution that incorporates theories about gender hardwiring that the slasher genre, at its best, illustrates with an agility and frankness that other genres (or sub-genres) don't. It has a relationship with its audience best described as antagonistic and a performance by Asia Argento that's so cringe-inducing it buggers our attempts to attach to the character and her travails.

For all its predictability, the picture's reversal, when it comes, carries with it the weight of our legacy of gender power-plays and atrocity, and for a brief moment the clouds part and The Stendhal Syndrome begins just as it's ending to comment on the ways that men have terrorized the image of women. Crucially, in this film that wants so much to address Argento's popular and critical perception, it's finally only as one-sided and simpleminded as Argento has a tendency to be. Not a failure by any means, the film is, in message and by the very fact of itself, a declaration of hopelessness that art can be forced to reveal the secrets of its sublime wisdom about the human condition. (It does offer such revelations, but only when you don't ask that of it.) The Italian Hitchcock's best film from his terminal decline, it's still too much Simon Oakland and too little Anthony Perkins.

THE DVD
Blue Underground rescues The Stendhal Syndrome from video limbo and ladles upon it the lavish attention to detail for which the little distributor that could is known. Pillarboxed at the European aspect ratio of 1.66:1 and pleasingly grainy (if a hair too dark), the film's anamorphic widescreen transfer is lush and decadent; it feels splash-panel lurid and that's as it should be. The first-class telecine effort is matched by comparable DTS-ES 6.1 and DD 5.1 EX audio options that splay Ennio Morricone's marvellous score across the soundstage. Unfortunately, the clarity of these mixes brings the slightly-detached quality of the dubbing into stark, distracting relief. The film and trailer occupy the first disc of this 2-Disc Special Edition, with a second platter sporting 102 minutes' worth of new documentary material. In "Director" (20 mins.), Argento expounds on the impetus for the production, something he pinpoints as his own experiences with the titular disorder--which are gone into greater detail in "Inspiration" (21 mins.). Interesting for perhaps the wrong reasons, yes? It bears mentioning that I'm always shocked by what Argento looks like, for no good reason. The auteur also interjects with his usual candour that he was, at this juncture in his career, deeply disenchanted with working in the United States and wanted to "stir things up" with what could easily be described as his most unpleasant picture. Joining Argento is Grazielle Magherini, shrink and special advisor for the film (she's the director of the Psychiatric Center in Florence), who sadly gives us anecdotes about the syndrome and descriptions of its symptoms instead of analysis into the roots of the phenomenon. The closest we get is something that sounds a lot like what Douglas Adams describes as how the last thoughts of any sentient being are inevitably the place of their birth.

"Special Effects" (16 mins.) examines a few of the gimmicks in Italy's first experiment with CGI, while "Assistant Director" (22 mins.) covers AD Luigi Cozzi's memories of his long-term association with Argento. F/X man Sergio Stivaletti, whose collaboration with Argento dates back to Phenomena, speaks over B-roll of himself dressing dolls and painting mannequins--the usual kitchen-sink sort of stuff. He relates an inspirational conversation he had with Tom Savini about the future of special effects but doesn't, oddly enough, mark this picture as the moment that a certain kind of effects house met its Waterloo. Reason for this could possibly be found in the footage itself: Stivaletti is shown to be a fairly poor nuts-and-bolts F/X guy possibly grateful for the help a mainframe offers. Meanwhile, Cozzi explains that he's a former journalist (like Argento) who admired the maestro's gialli and became an intimate when he was invited, as friends, onto Four Flies on Grey Velvet as a creative consultant. He soon landed the job of screenwriter, then AD. If nothing else, the piece speaks to Argento's loyalty to his supporting crew. Lastly, "Production Designer" (23 mins.) interviews Massimo Antonello Geleng, who has surprisingly little to say about his actual process. Whatever his obvious enthusiasm for a picture that features, centre-stage, pieces from the classical canon is dampened by the understanding that all he had to do was supply the frame and a freakin' computer did the rest. Geleng's subsequent descent into plot-regurgitation is both puzzling and dispiriting, given that a lot of his work here (Anna's apartment and the Uffizi's restoration room, in particular) is laden and honourable. Originally published: May 8, 2008.

THE BLU-RAY DISC
by Bill Chambers You think you've seen grainy? Think again. Blue Underground brings The Stendhal Syndrome to Blu-ray in a resolutely grainy presentation sourced from the Italian IP, which I believe explains it: This is a print we're seeing (albeit a first-generation print), not the negative. And yet, the film is so much more intoxicating in HD than it is in standard-def--one might say this slightly pillarboxed 1.66:1, 1080p transfer induces a little Stendhal Syndrome of its own. The aforementioned grain only becomes a problem in two near-consecutive scenes--when Anna cuts her finger on the train and when the shrink explains the titular disorder to her--that look outright snowy, complete with a bizarre if fleeting signal-like interference. Otherwise, colours are richly nuanced (Asia Argento's lips chart a mesmerizing circuit of reds), better representing the lush works of art on display, while the generally dusky image is beautifully detailed. (The DVD is quite murky by comparison.)

The BD expands the choice of D-BOX-enhanced soundtracks to four--English 7.1 DTS-HD MA, 7.1 Dolby TrueHD, and 5.1 DD EX and Italian 5.1 DD EX (this language option exclusive to Blu-ray)--but the audio is remarkably similar across the board, at least as squeezed through the sausage factory that is my prehistoric 5.1 receiver. DTS may offer the most transparent listening experience as well as the clearest rendition of Ennio Morricone's fabulous score, but in truth the mix itself never really takes flight. For what it's worth, I'm of the opinion that The Stendhal Syndrome plays best in Italian. Extras are identical to the SD platter's; let's hope this is just the first of many Argento titles to reach the next-gen market. Originally published: November 24, 2008.