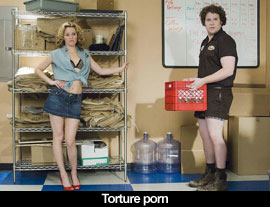 by Walter Chaw There's something wrong with Kevin Smith. Which is not to say that there isn't something wrong with most artists, just that in the case of Smith, it's become steadily apparent that whatever's wrong with him is manifesting itself in genuinely sad ways. Zack and Miri Make a Porno (hereafter Zack and Miri) is dreadful in the unique style of that guy who traps you in a conversation and proceeds to drop lame Star Wars references and ancient race riffs laced with pathetic interludes about his syrupy, jejune concept of romantic love. Afraid to seem "uncool," this guy will leaven his horny-dork shtick with dusty "blue" material--but every step along the way, all Smith does is demonstrate that he's not funny anymore (if he ever was), and that if there was a time that he slipped in under the zeitgeist, that time is over.

Consider that the first major riff of the film is indie-coffee-shop barista Delaney (Craig Robinson) saying to his boss, "You're asking a black guy to work on Black Friday? Do you know how racist that is?" (This is followed by the Indian boss (Gerry Bednob) rambling on for a minute before saying "motherfuckers.") Yes, it's a Kevin Smith joint: neither funny nor scandalous, neither well-timed nor gutter-eloquent, and shot with the director's trademark ugly ineptitude. What's appalling about Zack and Miri isn't the roughness of its language or the coarseness of its images, but rather the dullness of its insight and the ignorance of what it demonstrates in opposition to what it portrays. It's not racist that the Indian boss asks the black employee to work on the day after Thanksgiving--and the film knows that. What's racist is that the source of the humour is a black guy cynically playing the race card in a movie that subsequently mines laughs from someone's accent. Towards the end of a year that has broken new ground in the mainstream in regards to the modern race conversation, it's just stale and depressing.

Zack and Miri is a staid, stodgy, plain-faced little thing without a thought in its head. Wearing a print dress from the 1950s, it wants to shock and it bores; it wants to offend and it lulls; it wants to amuse and, lacking shock and offense, it doesn't. Its money shot is the Katie Morgan character spraying a quart of liquid shit on a hapless cameraman during anal sex (reminding that even when Smith wasn't entirely feckless, like in Dogma, he still had a shit monster)--a joke set up with her declaring that she's constipated and prestiged when the cameraman complains that the "bitch" has "frosted him like a cake" or some such thing. The scene occurs just after we get a bit about how Zack loves Miri and hasn't fucked another girl and how Miri loves Zack and won't be fucking another man. In other words, in the midst of an atrociously-written gross-out gag that has been clumsily telegraphed like a cut to a banana peel, there's a fifth-grade love story just as atrociously-written and clumsily-telegraphed. Loud and obnoxious but not in any way that's worth much hand-wringing over, Zack and Miri is the pinnacle of laziness in every single respect. It's worthless. Originally published: October 31, 2008.