TIFF File (Up Up and Away'd)

originally published September 7, 2008
The stars don't tell the whole story, of course, but for quick reference purposes, here's a rundown of everything I've screened so far @ this year's TIFF, followed by brief commentary: 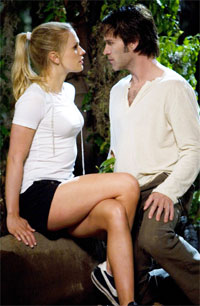 So far I appear to be in the minority on Rachel Getting Married (the praise-by-way-of-Altman comparisons must have Altman turning in his grave) and Lorna's Silence (pretty much said it all in my capsule). On the other hand, I'm slowly coming around to the positive consensus on Cannes Grand Prix winner Gomorrah: its title a play on the Camorra, better known as the Mafia, the picture is about the trickle-down effect that organized crime has had on an industrial Italian city not unlike "The Wire"'s Baltimore. But if "The Wire" too often betrayed its gritty authenticity with platitudes and contrivances (in the show's defense, I think viewers ascribed a documentary realism to it that the creators themselves, telling a modern Greek tragedy, never actively pursued), Gomorrah is told at such a clinical remove that it actually made me feel a little sociopathic for how frequently disengaged I was by it all. And yet, I'm finding it has a half-life greater than almost anything else listed above. Go fig; just wish I could find a way to articulate that paradox.

Feel free to discuss "True Blood" in this thread, by the by; seems to be the non-TIFF highlight of the week. Viva Anna!