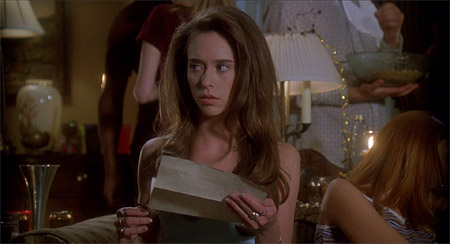 by Bryant Frazer Opportunistic special-edition DVDs are a dime a dozen, so the sudden appearance of a "10 Year Reunion Edition" of Can't Hardly Wait doesn't exactly signal that this insistently lightweight teen comedy is now considered a timeless classic. What it is, instead, is a remarkable time capsule--a look back, as though from decades removed, at what passed for youth culture in 1998. Audaciously staged as a little-more-than-real-time dramatization of a single night's house party, the air humid with that special, pheromone-drenched mist of booze and sweat and young sex and aspirations towards same, Can't Hardly Wait is a reminder of the pop-cultural moment when Brad and Gwyneth were the hot celebrity couple, Jennifer Love Hewitt was an up-and-comer, nobody had ever heard of Selma Blair or Lauren Ambrose, and the likes of Smash Mouth and Eve 6 were planting hit singles on MTV and the radio.

Co-writers and co-directors Deborah Kaplan and Harry Elfont weren't exactly spring chickens when they made this movie, but they weren't too much older than the actors, either. Combining their sensibilities with those of their younger cast members, the film in some ways represents the end of an era. While the soundtrack may reach way back to chestnuts like Dire Straits' "Romeo and Juliet," Nazareth's "Love Hurts," and the eponymous Replacements anthem, it doubles as a survey of the late-'90s pop landscape and features a propulsive score with some chug-chug guitar work by (I'm guessing) co-composer Matthew Sweet. Seth Green's white-boy B-boy is a precursor of both Eminem and Ali G, as well as an artifact of a hip-hop style that was at the time just starting to be eclipsed by Timbaland's high-tech beats. And Can't Hardly Wait deals in a shameless, sunny-eyed idealism that prizes sincerity and explicitly privileges the notion of true love; the spirit of Wim Wenders even touches the film as, in one spectacularly sweet vignette, a bikini-clad angel (Jenna Elfman, in a terrific uncredited cameo) touches down outside a neon-lit diner to dispense some hard-won advice to the broken-hearted protagonist. In short, we're a long way yet from the crass, porn-inflected attitudes of Superbad.

The budget-conscious Can't Hardly Wait takes place mainly at a well-attended, alcohol-fuelled high-school-graduation-night house party where the SteadiCam can glide easily from clique to clique, looking at the interactions between jocks, nerds, and the pretty/popular girls, and their occasional interactions with one another. The film's main characters each arrive with an agenda: fashion casualty Kenny (Green) is looking to score; quarterback Mike (Peter Facinelli) wants his bros to dump their girlfriends and spend more time male-bonding; geeky William (Charlie Korsmo) has hatched a kooky plan to take revenge on the jocks; and misfit Denise (Lauren Ambrose) is there to offer moral support for her buddy Preston (Ethan Embry), who's swooning over the newly single Amanda (Hewitt). Lots of moderately zany episodic content ensues: the geek and the jock find common ground; the misfit makes a love connection; and Preston musters enough courage and conviction from Barry Manilow's "Mandy" to eventually win the day.

For my money, that last bit is nettlesome. Kaplan and Elfont spend enough time tweaking stereotypes and expectations that it's a shame they don't have the gumption to close the deal by calling bullshit on their gloppy romanticism. Hewitt's performance in her flimsy role is, frankly, a dud, and the Amanda-Preston love story is a non-starter, not only because it's inevitable but also because it's unearned. On the film's commentary track, Kaplan and Elfont describe a tantalizing-sounding alternate ending (apparently scripted but never shot) that would have traded love-conquers-all for a more nuanced kind of coming-of-age optimism, then disparage it as too "European" for multiplex purposes. That's unfortunate--following the road of commercial expedience has led these two from lively projects like this and Josie and the Pussycats to cliché-dispensing work on made-to-order stuff like Made of Honor.

That's not to say they don't seem like they'd be a hoot to hang out with. The freewheeling yak-tracks collected here--one of them teaming the two directors with Green and producer Jenno Topping and dating back to before the film's theatrical release, the other recorded recently with the directors plus Green, Facinelli, Donald Faison, and Joel Michaely participating--are highly entertaining, covering behind-the-scenes tidbits about filming and the casting decisions that almost were (James Marsden, Alicia Witt) in addition to the many alterations that were made to score a PG-13 from the MPAA. These latter points are particularly discouraging. The original cut of the film was apparently full of elaborate SteadiCam shots as the camera's gaze shifted from one moderately intoxicated teenaged reveller to the next, a mise-en-scène that might have played like teenaged Scorsese hopped up on Red Bull. But because kids could be seen actually drinking in most of those shots, the long takes ended up getting truncated. The filmmakers point out a few more howlers, such as the CG balloon that replaces a beer bong in one shot, or the shot glass that's been turned into a conspicuously large lemon slice. Explicitly substance-abusive characters like The Stoned Girl and Crying Drunk Girl vanished entirely.

THE BLU-RAY DISC
Unfortunately, none of that R-rated material has found its way onto this disc, although Crying Drunk Girl does put in an appearance in the seven-and-a-half minutes of generally charmless deleted scenes--evidently sourced from an old VHS screener--that grace the platter in letterboxed 4x3 standard-def. (They're more like snippets and alternate takes, to tell the truth.)

Much better is the new centrepiece featurette, "Huntington Hills Class of 98 Reunion" (27 mins.), produced by Kristopher E. Wynne at Sony Pictures Home Entertainment, in which the above-the-line talent showers encomiums on casting director Mary Vernieu, costume designer Mark bridges, and, of course, each other. That gets tedious, but the behind-the-scenes morsels make it a fun watch anyway, especially for fans of the film. (Also, did you know that Jennifer Love Hewitt has large breasts? She does!) My favourite part of the anecdotal making-of doc "Can't Hardly Wait: The Making of a Teen Classic" (14 mins.) comes when Kaplan cites Hewitt's big entrance as the dopey, cringe-worthy moment it is. The third featurette, "Life of the Party" (9 mins.), compiles actors' comments on parties. They talk about teen party movies, their own graduation parties, and the fact that, hey, now that they're older, they don't go to as many parties as they used to. (Yeah, you can safely skip this one.) All three featurettes are in 1080p, but the interview footage looks heavily filtered--either that's a limitation of the HD cameras the producers used or they were trying to wipe a few of those 10 intervening years off everyone's faces.

The rest of the extras are uninspiring. There's "Special K's 411 Track Yo," which superimposes a graphics layer of "Pop-Up Video"-style trivia and random inane remarks over the movie. I suppose it might be fun to turn on if you're making your way through the film for the fourth or fifth time and have exhausted your commentary options. "You Know You're 90s If..." is pure filler, a 1990s-themed multiple-choice trivia game that you play using your remote control. And the Smash Mouth "I Can't Get Enough of You Baby" clip is a real blast from the past--a lame music video directed by McG, finished in that super-high-contrast late-1990s style and notable only for the appearance of several of the film's cast members in its generic high-energy dance party. The disc's menu also threatens some BD Live features I attempted to explore despite past experience suggesting that they will a) not work, or b) suck. For my efforts, I got only an error message: "Please confirm your player is connected to the Internet." (Yes, it is. Thanks.)

One more area in which Blu-ray truly showcases the film's 1998 provenance is the audio and video quality. The Dolby 5.1 TrueHD soundtrack (I listened to the 640 kbps core) isn't anything to write home about, though it's fun to remember that there was a brief period in the history of cinematic sound design when it was considered cutting-edge to stick dialogue in the rear surrounds. (After a "Welcome to the Jungle" karaoke scene, the same crew member can be heard bellowing a request for "Sweet Child!" from over your left shoulder and then, almost immediately, for "Patience!" from over your right.) The picture quality is similarly unimpressive, although I have no doubt that the transfer, encoded in the H.264 format, accurately replicates what the film actually looks like. It's grainy starting from the Columbia logo forward and uneven in an endearingly low-budget, catch-as-catch-can way. Some shots go briefly out of focus, an inadvertent but somehow appropriate artifact of the film's densely-packed, knockabout visual style.

At any rate, despite the lack of a "wow" factor, Blu-ray is a great way to catch the charming details in Kaplan and Elfont's directorial choices, like the 10mm lens they use to isolate a lonesome Ambrose in the middle of a couch, or the ambitious camera moves that push into and/or pull out of different scenes. Despite a fundamental adherence to bland teen-movie conventions, the best bits of Can't Hardly Wait are as lively and chucklesome as they are airy and inconsequential. It's a scenic trip down a road well-travelled. Originally published: September 29, 2008.