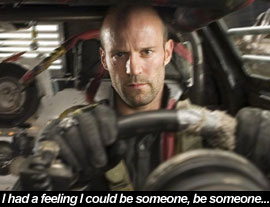 by Walter Chaw Paul W.S. Anderson makes one kind of movie: the kind with lots of explosions and girls and loud music and hyperkinetic editing. The shitty kind. Whether or not these pictures work has nothing to do with the head. Death Race, a "remake" of Roger Corman's Death Race 2000, is a middling Anderson joint: it's not so bad that you want to put a cigarette out on your eye, but it's also not so bad that it's good--though it is almost so bad that it's great. Jason Statham is Frankenstein, a guy framed for the murder of his wife who happens to be a former racecar driver--a past that, in the near future, is a premium in the privatized penal system. After being laid off from his blue-collar job in an entirely superfluous prologue that only really establishes the picture as one made in the second W. administration, Frank gets "recruited" to drive in the titular pay-per-view reality program involving hardened criminals participating in televised bloodsport. His arch-rival in the Big House is Machine Gun Joe (marble-mouthed Tyrese), his pit chief is gravel-voiced Coach (Ian McShane), and his zombie-voiced co-pilot is hot-looking Latin mannequin Case (Natalie Martinez). If you're surprised to see McShane in a piece of shit like this (sadly, McShane seems to only be in pieces of shit post-"Deadwood"), you should get a load of Joan Allen as evil bitch warden Hennessey, a creature one part genre prison bull, one part television executive. If she's also a lawyer and a film critic, start looking around for four horsemen.

The best that can be said about Death Race is that its last hour or so is completely devoted to shooting and crashing--to hilarious bloodletting, posturing, unlikely fight sequences, and our hero meting out his share of justice. I liked that it was unself-conscious enough (or just stupid enough) to try to pull off a moralizing epilogue about the importance of fatherhood--and I liked that Martinez is so dreadful an actress that she's given a couple of monologues to prove it beyond a doubt. The action sequences are impossible to follow and not worth trying, but what's sticky is that another semi gets wrecked after the Joker's in The Dark Knight, causing one to ponder whether this is a comment from the American mainstream on gas dependence in our new world order. There's something to be said for a film with such obvious opportunities for commentary on our bloodthirsty pastimes and the importance of cathartic outlets in times of economic and social collapse that somehow manages to avoid saying anything of relevance. Not that there's an expectation of relevance in an Anderson flick, just that it actually takes a little doing to avoid at least one reaction shot of a middle-class home gathered around the glass teat, soaking up a little of the old ultra-violence. Without that, Death Race becomes a commentary on the actual theatrical audience that, at least at my screening of it, included an eight-year-old girl anxiously asking her mega-tarded grandparents, once all the body pieces finally stopped flying, if Frank had won.

Completely disposable and engineered for the group of people who defend a film on the basis of cleavage and chassis quotas, Death Race mines a particular indefatigable appetite for cars and hot girls walking in slow-motion to misogynistic rap songs. The film is too slick to be a B-pitched exploitation throwback and too stupid to be anything else, hence it occupies some uneasy dead zone between camp and pretense. Think Ladyhawke with cars. Without anything resembling subtext, depth, or nuance--without character development beyond quick-twitch reaction shots shoehorned into a tired revenge scenario (grafted onto The Shawshank Redemption, complete with ebony and ivory denouement in some Mexican backwater) or anything approaching a character you can care about save perhaps McShane's Coach (he's essentially the James Whitmore lifer from Shawshank)--what's left is exactly the sort of movie idiots claim is every movie. It's piffle, light as air, utterly without substance, and every bit the garbage that it predicts we'll be watching in four years, thus making it already four years behind the times. Originally published: August 22, 2008.