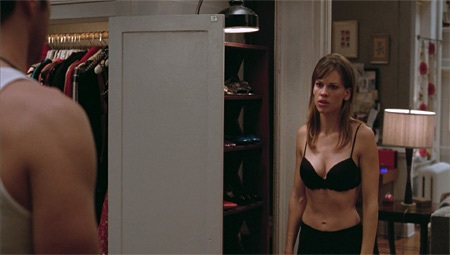 by Bryant Frazer In P.S. I Love You, Hilary Swank gets to play a part that's typically the province of male actors: the lovesick bachelor. The gender-specific word for what she is here is widow: Her husband has succumbed to brain cancer, leaving her alone in a Chinatown apartment. But the stereotype is so familiar as a guy thing--Swank's place is littered with pizza crusts, Chinese take-out containers, and take-out coffee cups, and she herself parades around in boxers--that its presence is a touch of wit in a movie that has lots of grace notes. That's a testimony to the skills of writer-director Richard LaGravenese, a sort of go-to guy for contemporary melodrama. He's made a career out of investing commercial romantic comedy with soul, humour, and a little bit of weirdness. Alas, that LaGravenese touch is not enough to balance out the manipulative tone of the whole wish-fulfillment enterprise he's working at here. P.S. I Love You is easy to watch and occasionally rewarding, but it's so transparently inspirational that its feel-good contortions might end up making you feel worse for the wear.

As the film kicks off, Holly Kennedy (Swank) is a young real-estate agent who's professionally unhappy and feels like she's under pressure to kick-start her life. Husband Gerry (Gerard Butler) is that ostensibly ideal mate, the wry, happy-go-lucky suspenders-wearing type with a nice smile, a cute accent, and a wished-for career as a musician. Gerry has shuffled off this mortal coil by the end of the first reel when a sudden flash-forward deposits us at his wake, where the priest and gathered survivors join in a hearty rendition of The Pogues' "Fairytale of New York." The dead man never really leaves the movie, though. Instead, he appears in ghostly, insinuating form, peering over Holly's shoulder or strumming an acoustic guitar on the bedroom floor of her dreams.

Gerry's arranged somehow for a series of letters to be delivered to her after his death, which will--in ideal-mate fashion--help her work through the grieving process and get on with her life. Thus Holly winds up, per Gerry's instructions, singing karaoke, vacationing in Ireland with girlfriends Denise and Sharon (Lisa Kudrow and Gina Gershon), shagging one of handsome Gerry's handsome Irish mates (Jeffrey Dean Morgan), and even taking a second look at bartender Daniel Connelly (Harry Connick Jr.), an amusingly straightforward fella who lacks the social grace to refrain from vocalizing every little thought that comes into his mind.

If you're thinking what I'm thinking, you're wishing somebody would step up right about now and say, "You know what? Not only is this kind of creepy, it's also probably not helpful." Holly's mom (Kathy Bates) eventually does just that, yet it's only a diversionary tactic. In Hollywood terms, Gerry's letters are exactly what Holly needs. Each one will arrive at the right moment, contain penetrating insights into her soul, and gently push her forward in the process of letting go of her lost love. That's all nonsense, of course, but it doesn't make sense to hold what's essentially a fantasy film accountable for mere implausibility.

Inasmuch as P.S. I Love You works, it works as metaphor--it's about honouring the dead by living well. And it works OK for a while, despite some fudging of the details. Holly and Jerry are written, for instance, as a struggling young couple, putting away a quarter of every paycheck to try and dig themselves out of their superficially depressing life. Holly actually complains at one point that they can't have children because their apartment is barely big enough to turn around in. The place we see on screen? If you have to grieve, it looks like a nice place in which to do it. Even the bar owned by Holly's mom is more like a suburban chain bistro than like a low-key Irish pub. The film suffers from its failure to engage with the imperfect conditions that lonely New York lives are really lived in. After all, Holly's life is one of relative privilege so long as the question is, "Where will I ever find my creative outlet?" as opposed to, "How am I going to pay my rent?"

Swank invests Holly with equal parts grace, confusion, dignity, humility, and hopelessness. She can be conventionally sexy, but she's also got a gawky boyishness in her, which makes her good for a role that's ultimately about deep unease. Gerry, however, is a problem. While Butler's good-natured ferocity was 300's best redeeming feature, here he's stuck playing a saint--and an ethnic stereotype, to boot. The marital spat that opens the film has a frisson of authenticity: the rhetorical gambits amplify to a point of near-absurdity, with both parties speaking past each other until, absurdly, one of them stomps out of the room. What follows immediately is, of course, reconciliation. But the scene is written with such even-handedness that we only see Holly's insecurities. Gerry is a good, fair man. All he wants, he says, is Holly. He never falters. He is, if you like his type, the perfect man. His biggest shortcoming is Holly's mom's resentment of him. (She expects him to bolt like Holly's father did, once upon a time.) The character's unbelievable as written, and Butler hardly manages to add any rough edges or authenticity. The effect is almost abstract. It's not like Holly's mourning her perfect husband so much as she's mourning the idea of a perfect husband. Maybe that's a metaphor, too.

THE BLU-RAY DISC
The Blu-ray Disc image is fine, nothing to write home about. P.S. I Love You was shot in 35mm, and the 1.78:1, 1080p presentation has the softness of film without undue harshness or over-processing. Grain-removal techniques seem to have been applied, which may have robbed the picture of detail but don't completely wreck it. The New York location photography has nice detail and depth--you can see it in a bravura opening crane shot that starts with a view of downtown, then tracks sideways as Swank emerges from a Chinatown subway stop. The scenes set in the rolling hills of the Irish countryside--the greens and purples coordinated, improbably, with Swank's wardrobe--are obvious draws in HD, but for demo material I might choose the film's finale, set inside an empty Yankee Stadium where, in one deep-focus shot, you can clearly make out each individual seat in the upper deck. Audio is much the same: adequate for centre-channel dialogue and ambient sounds, though nothing that's going to knock you off the sofa. (The karaoke-club scenes have an impressive low-end, and the mix opens up into the LFE and surround channels.) The disc has an English 5.1 track in TrueHD, and French and Spanish tracks in 640 kbps Dolby Digital 5.1.

Extras begin with 12 minutes' worth of deleted scenes in letterboxed 480p with production audio (in Dolby 2.0). They include a moment (complete with a couple of bloopers) that slightly expands Nellie McKay's small role as Holly's performance-artist sister Ciara, a restaurant-booth conversation between Holly and Denise, and then the real jaw-dropper: a more-than-a-tad-ghoulish scene in which a near-death Gerry shows up at a travel agent's office to arrange Holly's trip to Ireland. If this grim but funny bit was actually screened for test audiences, it would've been an enormous buzzkill. Hard to say, since the disc features no commentary from LaGravenese beyond his brief appearance in an 8-minute video interview with novelist Cecelia Ahern, who looks awfully photogenic in 1080p. There's a goofy, artificially-degraded 480p featurette (5 mins.) purporting to explain the principles behind "Snaps," a guessing game that puts in a couple of apparently random appearances in the film proper. A music video for James Blunt's "Same Mistake" (4 mins.) rounds out the Warner package; it's shot on video, encoded in 480p, and for some reason marred by an MTV-style song ID that's superimposed in the bottom left-hand corner of the screen for the entire duration of the song. Boo. Originally published: July 3, 2008.