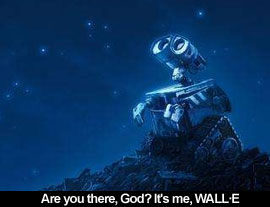 by Walter Chaw What curbs Andrew Stanton's WALL·E from being a complete triumph is an extended Battle Royale in the middle of the film between a ship's captain and his HAL-like autopilot--more Mack Sennett than Stanley Kubrick, it's a moment that panders to the diaper set instead of, as the rest of the picture does, elevating animation ever-so-delicately into a medium in the United States instead of a genre. Here in this children's film, find a blasted post-apocalyptic wasteland--a ruined Manhattan with towers of trash stacked higher than its abandoned skyscrapers by a robot, WALL·E, left behind for seven hundred years while humanity waits in orbit for Earth to become inhabitable again. It's never clear what devastated the planet, though there are suggestions aplenty that it has something to do with unfettered consumerism and terminal neglect by its human stewards, as the film opens with an elegant, eloquent, wordless forty-minutes of WALL·E nursing a connection with his absent masters through endless viewings of the "Put on Your Sunday Clothes" sequence from Hello, Dolly!--the one that ends with a lovely moment of hands held in new love, which becomes the central image of longing in the piece. The song's refrain is haunting to me now--in a way that I never expected anything sung by Babs could be--similar to how the phrase "meet me in Montauk" has post-Eternal Sunshine of the Spotless Mind. If WALL·E had stayed on this uninhabitable Earth scoured by 250 mph windstorms, especially with our hero discovering a plant sprouting in an abandoned refrigerator, I don't know that I could bear the sadness of it.

So WALL·E goes to outer space chasing after his inamorata, advanced probe EVE, sent by the humans from some great distance to check on the progress of the great clean-up on Earth and to sound, if possible, the all-clear for humanity's return to its home world. He winds up on the spaceship Axiom (a self-evident truth? Something intrinsically worthy?), where what's left of humans has devolved into permanent couch-potatoes, talking on their video cell phones, watching programs, morbidly obese and robbed of ambition--waited on hand-and-foot by the products of their technology and regaled, from birth, with propagandist messages from the corporate conglomerate BNL, which has, in the near future (people leave Earth circa 2110), taken over every aspect of life. (When a couple of the citizens of the Axiom are interrupted from their data stream, they marvel that their home since birth has a pool.) The chuckles in WALL·E are heavy ones; the juxtaposition of what's happened to Earth and the fool that mankind has become plays like a devastating amalgam of Victor Sjöström's The Wind (a bit where EVE is swallowed by a wall of sand and noise is nothing less than an astonishing visual reference to Lilian Gish struggling against the gale) and Charlie Chaplin's Modern Times. It's as agile and wondrous a silent tapestry as those early masterpieces--I only wish that it didn't resort for too long to easy Keystone Cops/Fatty Arbuckle gags. Each time I'm inclined to dwell, though, I remember a moment like WALL·E and EVE dancing through space tethered to their respective vapour trails, or the Captain developing curiosity, or the sense of doom that accompanies its deceptive ending, knowing that wherever the film thinks it's taken us, there's a windstorm just over the horizon.

Frustratingly, tantalizingly close to a modern satirical masterpiece, WALL·E's humanism is corrupted by slapstick that verges on nihilistic and a final moment that tries to have it both ways when it's done too good a job of painting a bleaker picture. But when it's right, the picture hits the targets groped clumsily by M. Night Shyamalan's The Happening with deadly, effortless precision. It questions the philosophy of increased spending in the face of collapse (of the WTC, of our economy); the dangers of too much comfort; and, poignantly, the essential sublimity in collective spirit that sees the possibility for grace and inspiration in art. There are bonds that bind, and the unquestioned soulfulness of this universe's automatons works as the emotional analogue--and saviour--of its bled-out people. If men are capable of this kind of creation, the film suggests, there's hope. The poetry of this picture (and of Pixar's Finding Nemo and The Incredibles) is that there are ineffable qualities to their creations--whether they're Hello, Dolly! or sentient machines--that are essentially inexpressible but no less real for it. It's set up as fortification against man's will to self-destruction (a literal "self-destruct" sequence mid-way makes the idea manifest), a work of art expressing that the products of our hands can hold, if we look well and deeply, the secrets to our own salvation. Originally published: June 27, 2008.