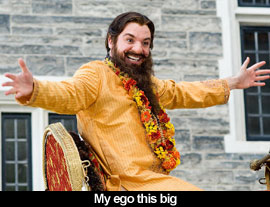 by Walter Chaw Dick this, cock that, penis penis penis--let me mention in the interest of full, ahem, disclosure that I don't think Mike Myers is funny; that Chris Farley's death was a great shame for a lot of reasons, among the worst that his passing opened the door for Myers to voice Shrek; and that it's not amusing in the slightest to make an endless stream of johnson jokes. The Love Guru has Myers sort of taking a wave at a cheap Indian accent in a redux of that Eddie Murphy triumph Holy Man--which means, essentially, that he proves himself not as committed as Will Ferrell and not as feral as Adam Sandler and not as neutered, as it happens, as Eddie Murphy. Myers, in other words, is less than his peers, doomed to be upstaged at every turn by anyone unfortunate enough to share a scene with him. (Doomed, too, to be constantly undermined by his inability to resist mugging for the camera.) Myers is Guru Pitka, a writer of Dr. Phil-cum-Deepak Chopra self-help volumes hired by the owner of the Toronto Maple Leafs, Jane (Jessica Alba), to cure star winger Roanoke (Romany Malco) of his sudden case of the shakes. Thus Myers marries his two passions (hockey and not being funny) into one noxious ball of shit and wiener jokes, in the process taking a colossal dump on an entire culture with puerile wordplays like "Guru Satchabigknoba" and "Guru Tugginmypudha" (Ben Kingsley, playing it cross-eyed). It was funny when Monty Python did it, yes, because Monty Python was made up of people who were funny.

Hopelessly low, The Love Guru is a cess and, worse, a string of badly-timed skits written by a third-grader that, when it's not obsessed with the pee-pee, takes great pleasure in tossing its resident dwarf (Verne Troyer) and instructing him to kick his little legs in the air. I didn't go to The Love Guru for some class, but I did hope to laugh. Worthless to delve too deeply into its romcom/underdog sports narrative, as the picture is a piffle: too offensive to be weightless, too stupid to be offensive. Not a satire of the self-help industry, nor a satire of the morons who follow it (note cameos by Jessica Simpson and Val Kilmer); maybe it's got something to say about the arrested assholes who laugh when they see a hotdog. That said, the pud-sketch montage in Superbad had me on the floor, meaning The Love Guru fails even in its basest aspirations--fails to succeed in the absolute minimum. For all its labours to offend, garbage like this is the very essence of cowardly. It toes the middle line, makes no effort to surprise; it is exactly the film the people who'll go see it voluntarily expect and deserve. Perhaps the saddest thing about it is that it'll take at least two or three more disasters just like it--unsalved by another dreadful Austin Powers sequel--before the last stitch of emperor's clothes falls off this prick.

Girded for a similar disaster in Adam Sandler crony Peter Segal's resurrection of the beloved Mel Brooks & Buck Henry cult/camp slapstick television series "Get Smart", imagine my surprise that the picture turned out to be sharp, well-metered, and best of all, kind. Maxwell Smart, Agent 86 (Steve Carell) of Cold War dinosaur intelligence agency CONTROL (repurposed now as a secret arm of Homeland Security, natch), begins the film as the agency's top analyst, called into action after the identity of the klatch's stable of spooks is compromised by nefarious KAOS agent Siegfried (Terrence Stamp). Paired with Agent 99 (the now-unbelievably foxy Anne Hathaway) on a mission to uncover Siegfried's cache of nuclear weapons, Max proves his mettle with his intelligence and, in the film's two best sequences, his sensitivity. It seems the easy joke at the expense of milquetoast Max early in the film when he declares before a room of hardened operatives (including beefy 23 (The Rock) and the Chief (Alan Arkin)) that their enemies are bad people, but people first. Yet Get Smart pays it off with a moment where Max, having recently lost 150 pounds, chooses the chunkiest girl at the ball to dance with--with no hint of self-consciousness or cruelty in the performance or the script at that point--and then escapes a sticky situation with a Bond-ian arch-henchman by speaking to him as a man with a broken heart. The film is about the defense of wives, the triumph of love, the importance of trust, and the kindness of strangers. It's also frequently hilarious, mining humour in slapstick, true, but also in the sort of self-effacing comedy with which Carell is most conversant.

Get Smart plays a great deal like the best parts of Farrelly Brothers comedies: largely free of their scatology, it finds its footing in strong characterizations and action scenes that work because the picture surprises by making you care. James Caan appears late in the game as a President incapable of pronouncing "nuclear," but the thrust of the picture is documenting human frailty and celebrating the value of grace when the easy road is paved with rancour and snark. I didn't relax until the dance sequence in Get Smart, and it wasn't until it was over that I realized how much I wanted to see this film that didn't rely on low humour and meanness for its suspect value as shock-grist for a few dirty, black chuckles. Ending with a sting that suggests there are franchise hopes, Get Smart is a lovely surprise: a smart update, with a hero who has transformed his humiliations and frailties into, of all things, maturity and empathy. It actually deserves a sequel or two to even the score. Originally published: June 20, 2008.