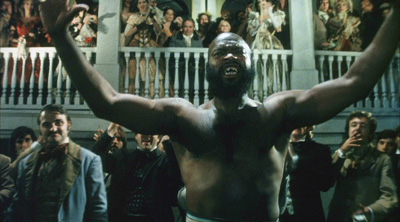 by Alex Jackson I was just about to say that I wish Mandingo were better than it is, but then I realized it wouldn't be nearly as good as it is if it weren't also "flawed." Some snarky hipster (Mitch Lovell of the LiveJournal blog (?!) THE VIDEO VACUUM, if you must know) rather brilliantly and concisely summarized the problem of the film in saying, "If you ever wanted to see Mr. Bentley from 'The Jeffersons' check a muscle-bound slave for hemorrhoids, this is the flick for you." Indeed, we get this image in the first ten minutes of the film. The checking of the muscle-bound slave for hemorrhoids, well, that I guess I can...appreciate, for lack of a better word. We all understand that slavery was "evil" on a purely intellectual level, but I don't think we have a terribly substantial visual database of the horrors and humiliations of it--and so I feel there's a real need for a disgusting and sensationalistic exploitation film about the subject. On those terms, let it be said that Mandingo does not disappoint. This has to be the most emotionally ugly film I've seen since Brian Robbins's Norbit.

So I can buy into that side of it. My problem is with "Mr. Bentley from the 'The Jeffersons'." It's impossible to watch this scene without thinking, It's Mr. Bentley from 'The Jeffersons' checking a slave for hemorrhoids! Haw haw haw! James Mason fares better (not the least because he nails the southern accent), but it's still hard for him to not go over-the-top as the drunken plantation patriarch ailing from rheumatism. Again, you don't see the character when you watch him, you see James Mason dressing down. Susan George doesn't even try to retain her dignity as a petulant southern belle marrying into the family. Watching her, it's easy to believe that you are simply watching a horrible turn by a horrible actress. Her dialect is a lot more laboured and pronounced than Mason's and she gives a very physical performance that pushes on long after the point is made. Her every acting choice is designed to put the attention on her. This is the very definition of camp, the manifestation of drag-queen narcissism. (George here has been accurately compared to Elizabeth Berkley in Showgirls.)

Then there's the dialogue. At one point, Mason tells George that she is acting like a real "Georgia bitch." Which is especially funny, because he pronounces "bitch" as "beach." For their part, the slaves talk like black militants. In secret meetings, they all agree they were just chillin' in "Africa" when the white man took them back to America. Before a runaway slave is lynched, he informs the crowd they can "kiss [his] ass!" Meanwhile, the white plantation owners discuss over dinner how much they hate this new abolitionist movement and how the Bible gives them the right to own slaves. I'm reminded of those awful early scenes in William Dieterle's 1939 version of The Hunchback of Notre Dame, where the monks debate about whether or not the earth is round. The abolitionist dialogue makes little dramatic sense; since none of these slave-owners would plausibly take the opposing view, what's the use of them even talking about it? The only purpose behind this scene is to congratulate a modern audience for being morally superior.

I've had a hard time with these "camp" elements--those moments where the film demonstrates a kind of incompetence. In simple terms, I felt they enabled the audience to shelter themselves from the material. If it's all an ironic joke, we don't really have to confront the subject matter. After simmering with that for a while, I got to feeling uncomfortable about demanding performances and dialogue be realistic and believable. There's a sense in which wishing to suspend your disbelief marks you as a novice--that an experienced and seasoned viewer will be sophisticated enough to accept a certain amount of artifice. These trains of thought eventually brought me to the same destination: I firmly believe that movies need to be about something other than themselves, and that the complexity of the text is not, in itself, a marker of quality. To put it plainly, in debating the merits of Susan George's performance, we distract ourselves from the real subject matter of the film.

Let me go back a bit and explain my comment defending the need for a disgusting and sensationalistic exploitation film about slavery. It has occurred to me that nobody would seriously object to the documentary footage of the liberation of the concentration camps at the end of World War II on the grounds that seeing emaciated concentration camp survivors doesn't forward our intellectual understanding of the Holocaust. I suspect those images are considered socially acceptable specifically because they occur within documentary footage. As film has a sort of amoral objective truth to it, these images can enter our collective unconscious without any sensationalistic connotation. Since slavery in the United States doesn't have the privilege of occurring within the 20th century, it's impossible to view its horrors in a truly objective context. The closest possible thing to an objective look is through the prism of muckraking sensationalism.

Maybe camp is part of the bargain. Maybe it's impossible to be sensationalistic without also veering into goofiness--a package deal. Camp and sensationalism share a sort of extreme cynicism towards the human race and in that way they aren't opposing forces but rather kindred spirits in the fight against the romantic. When it comes down to it, one could sincerely describe Mandingo as the "anti-Gone with the Wind," and through that paradigm, the cinematic and the sociological can be enjoined as one.

Young slave owner Hammond Maxwell (Perry King) is very much in love with his "bed wench" Ellen (Barbara Sykes). Nonetheless, he must take a white woman to pass on the family name. He marries Blanche (George) but barely touches her once the marriage is consummated, allegedly because he is disgusted that she wasn't a virgin on their wedding night. Blanche knows about her husband's bed wench and out of revenge and sexual frustration manipulates Mede (Ken Norton)--a strong young buck Hammond is training to be a prizefighter--into servicing her. In this basic outline, Mandingo reveals itself to be rather shockingly astute on issues of race and sexuality. Specifically, it argues against the '60s notion that sex is an equalizer among the races--that were we to all sleep together the colour line would just fade away. Far from it! Sexuality is instead a vehicle for social inequality.

The sex scene between Mede and Blanche is fascinating in that Mede takes the dominant position but barely even moves. She is inherently degraded for desiring and being used by a lover of inferior racial stock and of course his enormous member provides her with pain and pleasure to such a degree that the two cannot be differentiated. Most important, however, is the fact that Mede doesn't have any real agenda or motivation; he doesn't have any affection for Blanche and he's not fucking her to take something away from the white man. Through the choreography of this sex scene, we see him clearly as a mere prop used for her sexual pleasure and perhaps for the sexual pleasure of an audience wanting to see this obnoxious "beach" get torn apart by a big black cock. It's important to note this, lest we see the miscegenation as something of a socially progressive act. This is a manifestation of racism, not a counteraction against it.

With less iconic weight but much more complexity, the relationship between Hammond and Ellen illustrates this same point. What I love most about Mandingo is that it's a film dealing with slavery that doesn't pander to blaxploitation audiences by depicting the white slave-owners as totally reprehensible monsters and yet doesn't pander to white liberals either by giving us a token progressive abolitionist. Hammond treats his slaves with a certain kindness and human compassion, yet he believes in slavery and the supremacy of the white race. It's hard to sort your feelings out about the man. He's a good person existing within the confines of a corrupt system. The sticky thing here is that he genuinely feels love for Ellen, there is really no other word for the emotion, and he loves her not as a wife but as a wench. We're not exactly sure how Ellen feels towards him, though. She knows he's kind to her and because she is his favourite she has a privileged status among the slaves. That might be love, or it might be some other emotion we don't have in our lexicon.

There's a genuinely disturbing moment about two thirds of the way through when Blanche, upon discovering that Ellen is pregnant with her husband's child, beats her until she miscarries. Begging her to stop is a buxom house slave, a Mammy figure, who had previously welcomed Blanche into the family, happy to finally have a pretty white mistress. I'm fascinated by this "Mammy" archetype and the idea of rich white families sourcing maternity out to African-Americans. Whites keep this archetype alive, I think, simply because they lack a sufficient substitute. And here is this very visceral attack on the sacredness of motherhood, with the one living symbol of maternal values, the Mammy figure, powerless to stop it. Because she comes from a system in which she has no real power, she proves herself inadequate in this maternal role.

This is where I perceive the film as legitimizing its camp elements--or, if you prefer, its self-consciousness as an artificially-constructed movie. Though Mandingo isn't a realistic depiction of slavery, by acknowledging how the subject was broached throughout film history, it arrives at a greater truth. The message of Mandingo is that the gap between black and white can never fully be bridged. We have no common humanity because there is no common humanity. Our sense of human-ness is exclusively informed by our status on the social totem pole. When it comes down to it, Hammond wouldn't love Ellen if she wasn't a slave and she wouldn't love him if he weren't her master. This notion that external perception dictates identity cannot honestly and thoroughly be explored through the cinema without a sense of self-consciousness.

THE DVD
Legend Films' mere acquisition and R1 DVD release of this infamous Paramount title is cause enough for celebration among film buffs. Alas, aside from the feature proper, the disc doesn't have much to recommend it. The 1.78:1 anamorphic widescreen transfer is dark, grainy, and washed-out; it looks as though it was taken from an old print and subjected to none but the most rudimentary remastering--although the defects seeming organic to celluloid is a big plus, as it brings out Mandingo's grubby flavour. While there is no significant distortion, the Dolby Digital 2.0 mono sounds similarly weak from age. There is no supplementary material to speak of. Originally published: June 18, 2008.